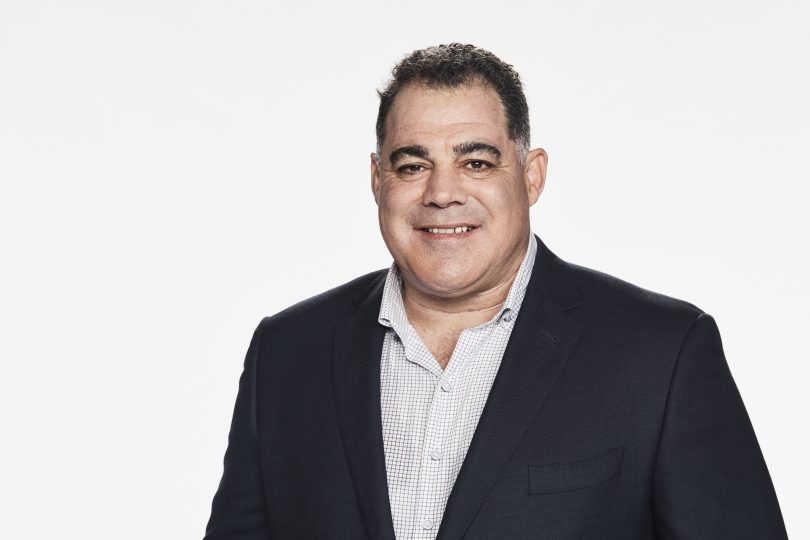 Canberra Raiders legend Mal Meninga may be seen wearing the pale blue of the Gold Coast Titans these days, but he insists the Canberra Raiders – the club he captained to three premierships in 1989, 1990 and 1994 – is still his number-one love.

Having left the national capital for his native Queensland in 2004, Meninga returned in 2013 and still calls Canberra home. However, in 2018, he accepted the position of head of performance and culture at the Titans. That role required him to live on the Gold Coast in 2019, but later that year he and his family were back in the ACT. He still continues his duties for the club, but in a consultancy capacity.

“Working for the Titans is something I am really passionate about,” Meninga tells Region Media. “They reached out to me and it’s a good challenge. It’s a stable club on the up and my role is to set standards, which weren’t previously where they should be. The club is now in a good place.”

But while he may be employed more than 1100km away in the Sunshine State, the lime green of the Raiders is always close to his heart.

“The Raiders are always first and foremost for me,” says Meninga, the NRL’s 13th Immortal and the current coach of Australia. “I want to see them successful all the time. [Coach] Ricky Stuart is a great mate of mine and he’s doing a terrific job. The club has re-engaged with the community very successfully.

READ ALSO After two big seasons, the NRL agrees: the Raiders are ready for prime-time

“Everyone around town here is talking about the Raiders, like it used to be. Success breeds success, and they have some really good young players coming through. While Ricky is in charge, setting the standards and bringing passion to the club, they will continue to be successful. He’s a local guy and the players have responded to him.”

Meninga predicts a big 2021 NRL season for the Raiders, especially if they can avoid the injury setbacks of last year.

“I expect them to finish top four,” he says. “They didn’t have a lot of luck last year, losing Josh Hodgson to injury, as well as the two big boppers – Corey Horsburgh and Sia Soliola – plus Emre Guler and Bailey Simonsson.

“They handled that adversity really well, and having experienced Poms in the squad really helps. Although it will be interesting to see how the loss of John Bateman affects them. He was an influential leader.”

The Raiders’ targeted recruitment of players from England in recent years echoes the strategy employed by the fledgling club in the 1980s, when a swag of top-line Queenslanders, including Meninga, relocated to Canberra.

“I made the move in 1986 along with my [Brisbane] Souths teammate Gary Belcher, and a lot of other players followed such as Gary Coyne, Kevin Walters, Steve Walters, Steve Jackson and Peter Jackson. It’d be hard to get Queenslanders down to Canberra like that these days.”

Having only joined the NSWRL competition in 1982, the recruitment of Meninga was a coup for the fledgling club – especially as the then 25-year-old was already an established star for Queensland and Australia.

It may have seemed a monumental task to pry a player of his calibre from sunny Queensland to lace up the boots during Canberra’s icy winter for a team that finished a lowly 10th in 1985, but Meninga was eager to make the move south.

“It all stemmed from playing for St Helens after the 1984 season,” he recalls. “I really enjoyed playing over there and on the back of that I wanted to go play in the Sydney competition to prove myself.

“I saw how a one-team town could gather around a footy team and how parochial they were. I didn’t want to live in Sydney so that only left two clubs: Illawarra or Canberra. Because Don Furner [Senior] was the Raiders coach, it was a pretty easy decision to go there.”

The Raiders struggled in 1986, but 1987 was the year that changed the club forever. Having finished third in the regular season, they made the grand final against Manly and lime fever gripped the ACT.

The local community was galvanised by the team’s success, which kicked off the club’s golden era. They may have been comprehensively beaten 18-8 by the Sea Eagles in that decider but the Raiders were, by then, etched into Canberrans’ hearts.

“It was basically the same team as 1986, but Wayne Bennett came down to work with Don Furner [as co-coach] and it proved to be a genius decision,” says Meninga. “We learnt so much from ’87; the way we celebrated, I think we had tickertape parades before the grand final in Canberra. That wasn’t the right thing to do – it basically fuelled the enemy.

“By the time 1989 came, under Tim Sheens, we were ready and our preparation for that grand final [against Balmain Tigers] was perfect.”

And we know how well that ended.

The Canberra Raiders begin their 2021 NRL campaign against Wests Tigers at GIO Stadium on 14 March at 4 pm.