Foxsports has the bad news of a Raiders thrashing yesterday afternoon at Canberra Stadium to the Cowboys.

Worse than the loss was the short lived return of Terry Campese and a new injury to Josh Dugan.

UPDATE: “Gordonresidential” sent in the following as a story and is worth thinking about:

Who manages the Raider’s season strategy?

Who ensures players who return from long term injury are match fit?

What a stuff up. according to the ABC

Canberra’s troubles went from bad to worse when it lost stars Josh Dugan and Terry Campese before relinquishing a 22-point lead to lose 40-24 to North Queensland on Sunday afternoon.

…. impressive start was soured by the loss of Dugan (ankle) and Campese (torn right adductor), the latter just seven minutes into his return to action after nine months on the sidelines with a knee injury…..”.. shows you how much influence [Dugan] has on this team and how much he links everything together,” Canberra skipper Alan Tongue told Grandstand.Tongue said he expected coach David Furner would have a few choice words for his side in the aftermath. “We got ourselves into a position where we’d done enough to win that game of footy and I know Dave will be so furious,” he said.

“We still had a chance right at the death there to hold them out and [it’s] really disappointing.

“We did everything right that first 20 minutes, we had all the ball. Credit to the Cowboys, they stuck to their game plan. Johnathan Thurston is as crafty as ever and we just let another one slip away.” 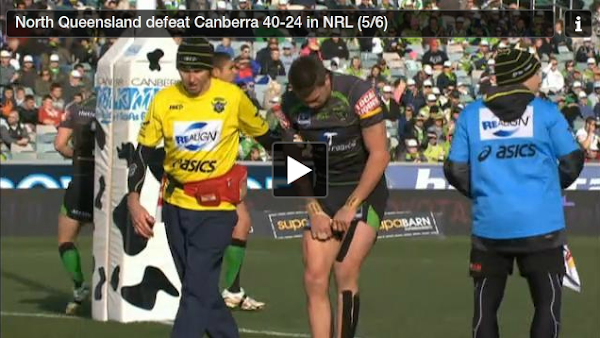 At least the Libs can spell ‘Canberra’ correctly.

And here I was expecting the title of this to be “The Raiders find another way to choke, choke, choke”

bj_ACT - 9 hours ago
Canberra is definitely improving and cities between about 400k and a million have great amenities without the negatives of ma... View
Melissa Hobbs - 11 hours ago
Need to sort out the health care system in the Berra. Worst in the country View
Breaking 3

JC - 11 hours ago
What sections of stage 1 are poorly designed and need fixing. As for the traffic lights you gotta be kidding right? As both a... View
Capital Retro - 13 hours ago
Three things to remember about the light rail: 1. The Greens want it. 2. It's all about urban renewal; it was never about pub... View
bj_ACT - 14 hours ago
I think you’ve raised some valid questions. There might well be valid answers from the ACT Government to those questions. I... View
Sport 4

Capital Retro - 16 hours ago
"The data is only accessed by ACT Health if it is needed for contact tracing purposes and contact details are deleted after 2... View
garyfrancis - 23 hours ago
Under what rule, law or legislation is this being bought to us via? View
garyfrancis - 1 day ago
Argo please. The 28 day "guarantee" really? Who is going to get caught holding onto the information for more than 28 days? Wh... View
Property 36

jorie1 - 17 hours ago
These changes are ridiculous and will only force landlords in the ACT to sell up. It is already not financially viable to hav... View
Maya123 - 19 hours ago
The best time to get houses upgraded would be when the house is sold. This would then cover both rentals and owner live in ho... View
Acton - 22 hours ago
First will be calls from tenant lobby groups for mandatory roof insulation, then better blinds and curtains, double glazed wi... View
What's On 8

@The_RiotACT @The_RiotACT
Whatever you think about assisted dying, Canberrans should be able to decide the issue themselves, says Ian Bushnell https://t.co/uCBheueQMJ (42 minutes ago)

@The_RiotACT @The_RiotACT
Rodney Plumb’s workplace has one of the best views on the South Coast, but when the massive new Batemans Bay bridge opens, the 78-year-old will be out of a job https://t.co/3qW3E9sZIB (12 hours ago)