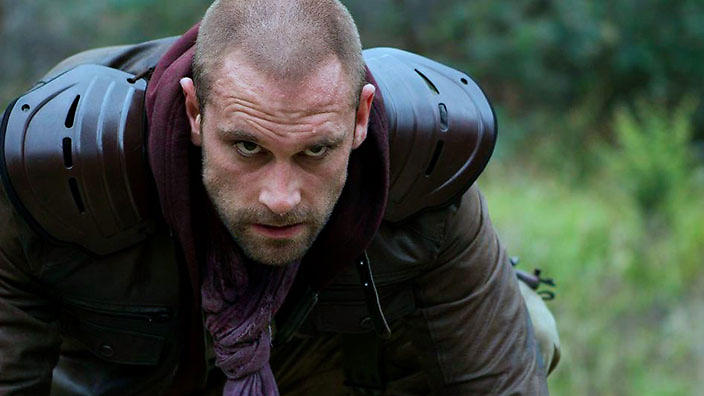 Am I lucky, or what? I just interviewed Che Baker, the brains behind Blue World Order, a film made in Canberra and screening in preview at the Canberra International Film Festival tonight.

Details of when the film will have its official premiere are yet to be announced, and tickets for this special preview sold out well in advance.

Baker, who publishes fiction as Scott Baker as well as making films, described his most recent novel as a cross between Indiana Jones and The Rule. It’s called The Rule of Knowledge.

He said that he and his team wanted to make a film in Canberra that was of a different genre – not just political drama as is the tradition in this town, but to show the world that we can make films of different kinds here and that the filming conditions here are superb for film crews. He also wanted to use local talent. Along with that, he’s had some amazing support from some very big names.

I hopped onto the film’s website and I am literally gobsmacked at the line-up of big names associated with this film.

Try Matthew Reilly, executive producer. Think action-packed, sci-fi on steroids if the trailer is anything to go by. Among the cast is actor Billy Zane (Titanic, The Phantom, Back to the Future and Zoolander), who has over 12o films to his name. Stephen Hunter from The Hobbit is the mad-cap scientist. And if that’s not enough for you, Australian screen legend Jack Thompson is in the mix too.

Baker’s idea for the movie came about when he and a friend, Dallas Bland, created a short film which was the seed idea for the movie. The website described the short as “A short concept film. Made entirely over one weekend for the budget of 7 pizzas!”

Blue World Order is an apocalyptic movie about the aftermath of nuclear war in the northern hemisphere. Survivors all head south and a bio-tech virus is released that attacks the human beings’ nervous systems. All are vulnerable on the planet, but one man is immune and his daughter is the last living child – and the last hope for mankind to survive. Having not yet seen the film, it looks to me like it’s “edge-of-your-seat” stuff that is as exciting as it is frightening, I should imagine. A little bit of that old, “what if?” scenario that’s almost believable – the stuff that Margaret Attwood books are made of!

There’s a lot more to this film that I could write about here, but why not hop on over to the website and read more about it for yourselves: http://www.bwomovie.com

Meanwhile, I was lucky enough to grab a quick interview with Ché Scott Baker, true. But now, I am even luckier – having snaffled a free ticket to the private preview event for tonight!

Will let you know what I think tomorrow!

Co-owners of the RiotACT Tim White and Michael McGoogan are investors in Blue World Order.

HiddenDragon - 7 hours ago
So the light rail terminus (and the pretty lights in the trees) haven't done the trick with all that "activation" and "enlive... View
JC - 8 hours ago
60m a year (cost of lightrail) doesn’t go that far. Some seem to think it’s a magic pudding. View
May Mac - 8 hours ago
If the Sydney and Melbourne Buildings could be constructed in separately owned sections which created the beautiful buildings... View
Community 44