Brad Clarke helps others find their lifeline after discovering his own 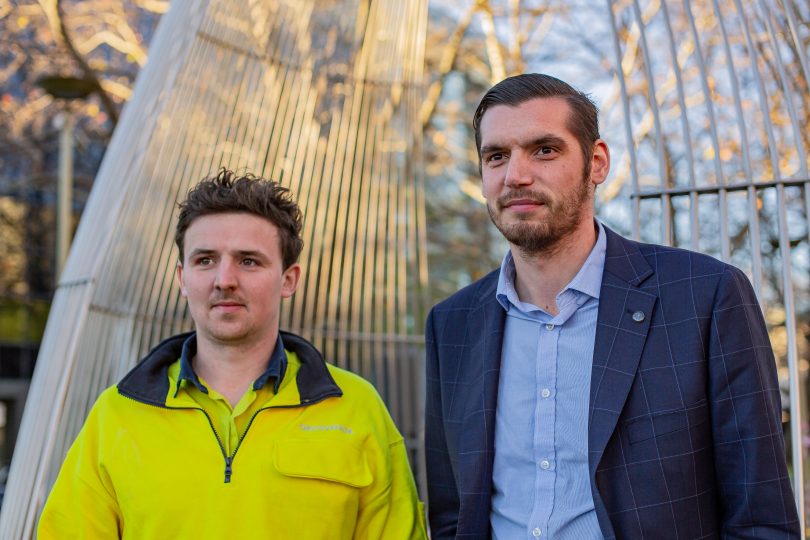 Southern Cats vice-president Brad Clarke (right) alongside his best mate of 15 years Troy Edwards who helped him when he was struggling the most. Photo: George Tsotsos.

Brad Clarke can still remember sitting across from his best mate Troy as he asked him if he was alright. Brad attempted to brush it off and pretended like everything was normal, but his mate knew better.

“I know there is something wrong, just tell me what it is,” he recalls him saying.

It was at that moment that Brad’s life changed. He finally admitted that he was struggling – some days, he even struggled to get out of bed.

Now, two years on from that moment, Brad is reaching out to as many people as he can to remind them it’s OK to not be OK.

“When I was growing up, I was heavily bullied at school so I had a lot of self-confidence issues growing up,” he recalled. “As much as you try to work through these things, it does come back to bite you.

“If you let it get a hold of you, sometimes it does really hold you down. I can remember a few Saturday mornings when I felt like I didn’t have the energy to get out of bed.

“At the time, I was really struggling to talk about it but when I did manage to talk about it, knowing there is someone when you have those doubts, whatever it might be, made it so much easier.”

As the vice president of local Aussie rules club the Southern Cats, Brad realised how impactful the culture of footy club could be. So he made the decision to tell people of his struggles, proving that vulnerability can be a person’s biggest strength.

“At the start of every year, we have a night which we call Culture Night, where the team sits down and talks about what they want to achieve for the year and set the team rules,” he recalled.

“Being a part of the football club had really helped me with my mental health and that particular evening two years ago, I took a leap of faith and told people.

“I said that I wanted to make sure everyone else knows that if they ever need someone to talk to, I’m here. On the back of that, I had about five guys who reached out to me and said they had been feeling the same way.”

Last night we came together alongside the Murrumbateman Football Club and said enough is enough.It's time to talk.

Brad said that was the instigator for the club to organise a dedicated round to raising awareness for mental health in 2018. The following year, the club organised a Blue & White Ball with all money raised to be donated to lifeline.

The small club, which comprises of only one team and 26 registered players, set the goal of raising $2,000.

“We said that if we could get 100 people there on the night and we can raise $2,000, we would be over the moon,” he said. “On Saturday night (29 June), 120 people joined us to say something needs to change and the way we talk about mental health needs to change.

“It looks like we have raised a touch over $8,000 for Lifeline Canberra, which is equivalent to 320 answered phone calls.

“As a football club, we know all too well the stereotypes and stigmas placed around young men and talking about their mental health. We know this needs to change and the only way we can create change is by speaking out about it.”

The club is now formulating a five-year plan to make their Lifeline round a part of the Canberra community and drive change in their club and competition.

“It is OK to ask someone for help, it’s normal to feel overwhelmed by life and the more we normalise it, the easier it gets for people to speak out and say they need help,” Brad said.

“Our goal is to never rename this event in honour of someone who thought they didn’t have someone to talk to. That’s our goal.”

Bloody legend, good on you Brad, an important issue that’s too easily left in quiet.

John MacCallum - 3 hours ago
Justin Evans that’s true because plenty of Truck drivers have driven through them to their death. View
Justin Evans - 11 hours ago
Lights, bells and even boom gates aren't going to stop someone if they aren't watching the road View
John MacCallum - 16 hours ago
All level crossing collisions are avoidable. It just takes people to drive appropriately and not be complacent. See and avoid... View
Opinion 31

Tonna takes loss in his stride with quarantine kilometres for Lifeline