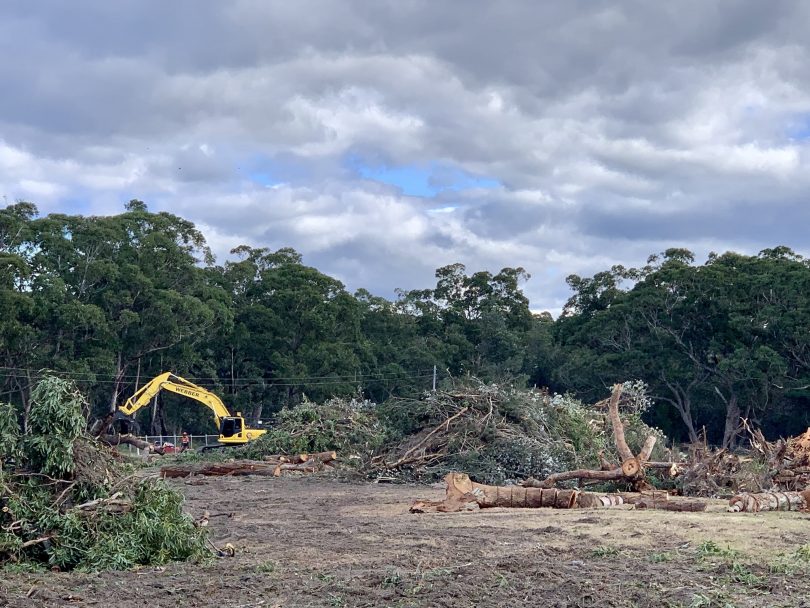 Broulee community members say they are furious about Eurobodalla Shire Council’s lack of consultation as bulldozers begin ripping through trees on community land ahead of a new 48-lot development.

More than 100 people attended a last-minute meeting held during the past weekend, and there are reports that at least one protestor subsequently entered the site, blocking bulldozers from further work.

The heavily treed land is situated on the corner of Broulee Road and Clarke Street, adjacent to land owned by developers Sue and Paul Gillan. Community members say it has been zoned for community use since 2004.

Members of the Broulee Mossy Point Community Association said that on 22 June the entire area was fenced off and bulldozers moved in to clear both sections.

It is believed the community land was under consideration to be sold to the developers for use as an Asset Protection Zone (APZ), mitigating bushfire risk.

Eurobodalla Shire Council said development consent for this stage of the housing estate was approved by council in February 2021.

“The area has been zoned for development for many years,” said Eurobodalla Shire Council’s director of planning, Lindsay Usher. “It went through a significant and detailed ecological assessment as part of the biodiversity certification process. 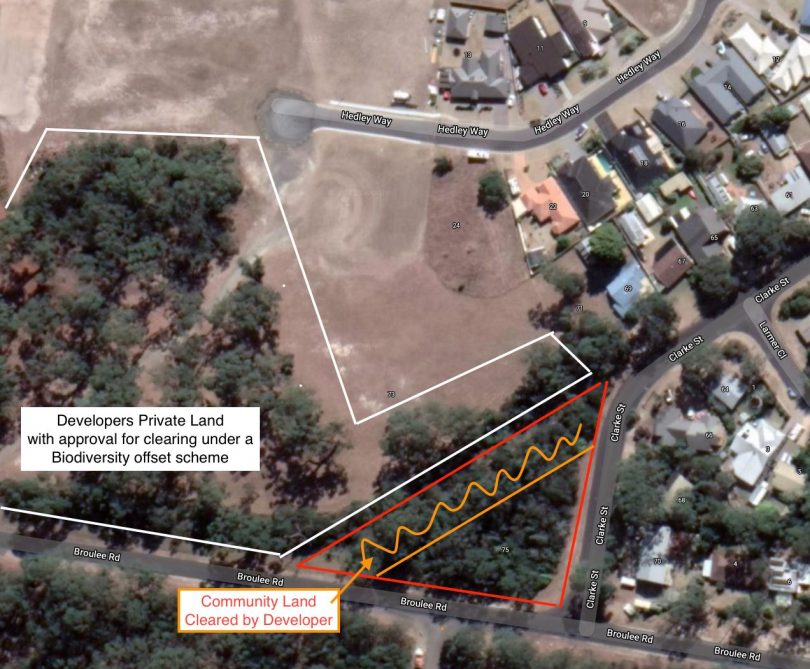 “The developer has already paid approximately $700,000 in offsets, with additional payments required for further approved clearing.”

Mr Usher said the biodiversity certification “included comprehensive community engagement … where we talked in detail with the community about what was going to happen, including clearing”, and letters went sent to nearby residents seeking feedback in February 2021.

A council-owned road reserve of roughly 2300 square metres between the community land and the estate also had approval for some clearing under Rural Fire Service requirements.

Mr Usher added that a corner portion of the block nearest the Broulee Road and Clarke Street intersection – at around 900 square metres – is community land and that the trees and vegetation there remain untouched.

But he said it can be a difficult task for council to manage multiple expectations from the community and get outcomes that work.

“Often people want to see bigger blocks and more trees, but that means more land area needs to be developed,” he said. “There are impacts whichever way you do it.” 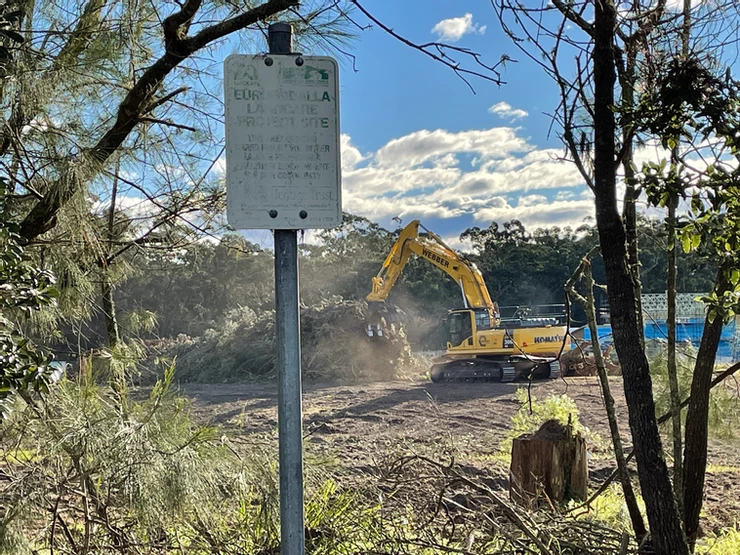 Opponents say they believed the now cleared land in Broulee would not be sold. Photo: Supplied.

Opponents to the project have hit back, claiming there has been little consultation, and asking why the required APZ land was not taken from the developer’s own lot.

Andrew Bain from the Broulee Mossy Point Community Association said representatives met with council in April and are able to present evidence from 2003 that council had converted the triangular block into community land.

“Council wrote back to us and said they wouldn’t proceed with the sale,” he said.

“This is a registered Landcare site, signposted on both sides in conjunction with council.

“It was a total shock to Landcare, too. The bush they have been caring for and keeping weed-free for well over a decade has just been bulldozed.

“The main thing is the lack of consultation. Why didn’t they tell us what they were going to do? They still haven’t consulted the community. Developers should maintain fire protection within their own boundaries, not take community land.”

Concerns were aired at the public meeting that every remnant of forest at the entry to Broulee would eventually be removed, and that in the longer term, back fences would line Broulee Road.

“The mood at the meeting was really angry – people are very opposed to what council has done,” said Mr Bain.

Tempers have reached boiling point in the community. There are allegations that hate mail has been sent and that bulldozer drivers have been the subject of verbal abuse.

He urged non-resident ratepayers to vote in the forthcoming council elections and register their protests with council rather than engaging in abuse.

“What we’ve seen is an utter disregard for the community,” said Mr Bain. “Council’s view seems to be that you can treat residents like a mixture of mushrooms and cows – keep them in the dark and milk them for rates.”

A little closer to home, a number of old trees have been cutdown at the Phillip Oval for some reason. 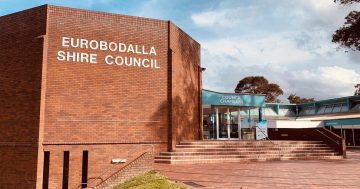 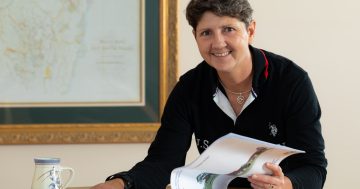