Brumbies 37-10 over the Rebels in Canberra 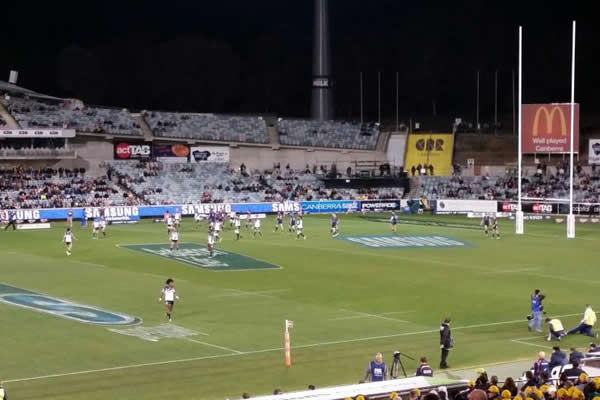 A classy Brumbies dominated the Rebels last night in Canberra strolling to a 37-10 win.

A first half double to Matt Toomua saw the Brumbies go to the break with a 25-3 lead.

Nic White put in a man of the match performance as national coach, Ewen McKenzie watched from the stands.

A six-try bonus point win will give the Brumbies a lot of confidence after a disappointing South African tour.

10 Brumbies are involved in the Wallabies three Test series against France throughout June.

The Brumbies next face an in-form Waratahs in a must win match at ANZ Stadium on 28 June.

Rob Fielding - 4 minutes ago
Melissa Henry that’s why I don’t Donate Charity’s are the Biggest scammers going Donate $1 take out administrative fees... View
Ian E Wheeler - 57 minutes ago
Thank you for your donation. It has helped me after I lost everything. Amount received *might* have paid for something like t... View
Trish Roberts - 60 minutes ago
This is appalling. They aren’t trying to game the system. They are simply 2 people in a family relationship who need a home... View
Lifestyle 84

Anthony Stewart - 1 hour ago
Really 104.7 is no surprise I turned off after a month of the ‘new’ breakfast DJ when they started View
Guy Noble - 2 hours ago
Tom Adam I dont think he and Bec have done anything to promote themselves lol View
Tom Adam - 3 hours ago
Happy to use this to negotiate a better radio advertising rate. View
News 4

Stas Idowu - 1 hour ago
EL2s beware View
ChrisinTurner - 1 hour ago
I hope the panel addresses the problem of attracting technical specialists like engineers and certain IT people. The current... View
Matthew Davies - 3 hours ago
Funny how work level assessments always seem to favour the kinds of skills that are required to work in a Human Resources dep... View
Sport 1

@The_RiotACT @The_RiotACT
Belinda Nunn has been lauded for her dedication to her seven children and the community, but now her family faces homelessness as they join the long queue for public housing https://t.co/sZq5Z0XRNE (19 minutes ago)