Brumbies crucify the Rebels and qualify for the finals!

It’s hard to say what the best thing about tonight was.

— The jinking running lines?
— Big Noodles running rampant?
— The passing out of contact?
— The six tries?
— The second string players standing up?
— The power and pace?

Foxports has the match report.

The Brumbies have qualified for the Super Rugby finals for the first time in nine years after beating Melbourne Rebels 39-17 at Canberra Stadium.

It’s the first time the Brumbies have qualified for the Super Rugby finals since winning the competition in 2004.

But if they play like that against the Lions it will be a hell of a night! 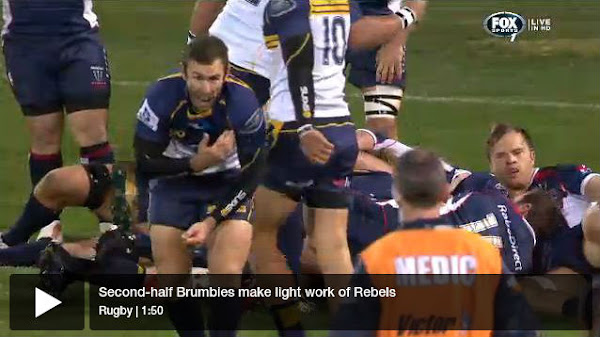 Eric Staal - 2 hours ago
Jake Badger change is scary and bad View
Kylie Beer - 7 hours ago
Ian Hubbard Ian, I know you know that the YWCA does a lot more than childcare. The current buildings on the site haven’t be... View
Joan James - 8 hours ago
Rob Parker my thoughts too! View
News 51

William Coats - 12 hours ago
Lee McDowall and he personally probably wont face the people again. It is good of the union not to strike until the week afte... View
William Coats - 12 hours ago
Nathan, The ACT is run as a union town, unless we complain nothing will be done. "fix my street" is the perfect example, why... View
chewy14 - 16 hours ago
The whole point is that developers have worn the costs of their proposals based on the current land use and policies in place... View
News 52

Jaala Hamilton - 13 hours ago
Loris Manns couldn’t agree more! View
Lisa Bishop - 14 hours ago
Inmates should be made to contribute to their keep. Get them outside building and planting out vegetable gardens etc View
Breaking 4

JessP - 15 hours ago
Went over Evatt, low and loud! View
show more show less
*Results are based on activity within last 7 days

@The_RiotACT @The_RiotACT
'With One Voice' is starting its second Canberra choir and they're inviting everyone to have a go at a workshop Wednesday night in Gungahlin https://t.co/AA21xBsz1w (7 hours ago)

@The_RiotACT @The_RiotACT
Proud parents of adopted RSPCA animals share how their COVID-lives have been enhanced with their new forever friends https://t.co/gpmCbdgwat (8 hours ago)

@The_RiotACT @The_RiotACT
Hot in the City: Good Brother in Dickson has found its brojo & hit its stride https://t.co/5RhiSdyq6H (9 hours ago)