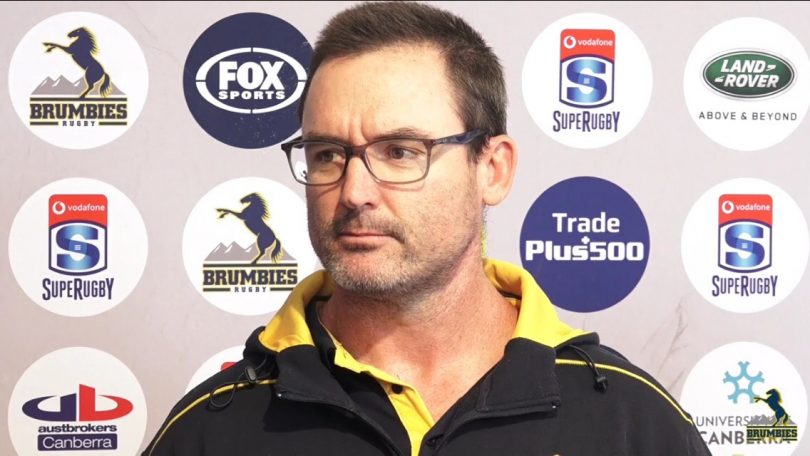 The Brumbies have defied Wallabies coach Michael Cheika’s request for David Pocock, Allan Alaalatoa and Scott Sio to sit on the sideline for their clash against the Sunwolves on Sunday afternoon and have named the trio to start.

Cheika asked the Brumbies to rest three of their high-profile stars ahead of the Test against Ireland in the same week the Brumbies are trying to rebuild their crowd support.

But Brumbies coach Dan McKellar refused the request and named his experienced trio in the starting XV, with only one change to the side that defeated the Bulls in Pretoria last Saturday.

After the second smallest crowd in the club’s history, the Brumbies are desperate to hit their target of a strong 15,000 crowd at GIO Stadium.

The Brumbies hooker depth has been obliterated by injury and suspension this year, with the recent suspension of Folau Fainga’a for a headbutting incident in South Africa, leaving inexperienced Connal McInerny to start.

McInerney, who has won two Brumbies caps off the bench and has played a total of 17 minutes, is the only fit hooker at the Brumbies.

A decision on who will provide cover for the hooker position will be made closer to kick-off.

The Brumbies have only ever met the Sunwolves once before in Canberra, winning 66-5 in May 2016 and will be searching for back-to-back wins for the first time in nearly a year whilst the Sunwolves remain on the hunt for their maiden Super Rugby win away from home, having lost their previous 20 away matches.

Daniel Palmer - 43 minutes ago
Minus the fires, has me stumped why. View
The Garden, botanicus perfectus - 4 hours ago
Ann Gottaas View
Dee Small - 4 hours ago
Saw a young one on the O’Connor ridge yesterday... View
Lifestyle 16

aussie2 - 4 hours ago
Here is another for the "shopping list". It is government responsibility to ensure its citizens have access to pools and othe... View
2902 - 7 hours ago
Imagine the money one could make building apartments on this site, right out the front of the proposed light rail track View
ChrisinTurner - 8 hours ago
There is not enough attention to maintaining services in areas with dense populations. The government seems to be working on... View
Opinion 75

@the_riotact @The_RiotACT
Have you been shocked by your latest #electricity bill? One Bonner resident saw her last quarterly #bill soar $1000, and she's not the only one https://t.co/0fib4XxA9r (42 minutes ago)