Brumbies do enough to keep the train on the tracks. 30 to 23 over the Canes

Foxsports has the happy news of the Brumbies hard fought win over the Wellington Hurricanes at home tonight:

Brumbies sharpshooter Christian Lealiifano has kicked six penalty goals from as many attempts to boot his side to a narrow 30-23 victory over the Hurricanes in Canberra.

The Brumbies looked to have the match sewn up after a try to blindside flanker Peter Kimlin gave them a 14 point lead with 20 minutes left on the clock.

But the Hurricanes came home with a wet sail, first through a converted try to halfback TJ Perenara and then a disallowed TMO decision in the corner to captain Conrad Smith.

The desperate Hurricanes continued to smash away at the Brumbies line, questionably turning down several penalty shots at goal before an accidental offside allowed the Brumbies to escape with a narrow win. 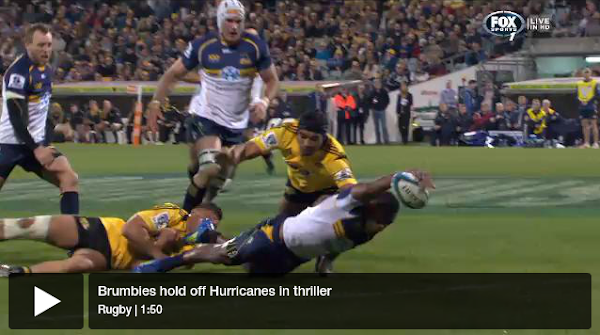 2 Responses to Brumbies do enough to keep the train on the tracks. 30 to 23 over the Canes
Filter
Showing only Website comments

Headline made me think they lost!

Canes are a tough team, and winning beats the hell out of losing.

Here’s hoping the Brumbies are just keeping their powder dry!

Phil Ebbott - 13 minutes ago
Industry? In an industrial area? NO WAY! View
Breaking 44

Helen Goddard - 24 minutes ago
Read the article ... that's not the story at all. These people had, like politicians, agreed to isolate for the mandated 14 d... View
Anne Cahill Lambert - 44 minutes ago
We had already agreed to self isolate for 14 days - same as politicians! Except we wouldn't be allowed out to Parliament Hous... View
Anne Cahill Lambert - 45 minutes ago
I've been in NE Victoria where there is no Covid. We go straight into isolation if/when we get home.... View
Sport 11