Brumbies impotent against Rebels 25-24 (With Video)

But we lost closely tonight against a team largely staffed by Brumbies rejects.

And for mine we lost because the Brumbies of 2011 are a headless chook.

But no-one’s running the show.

The Melbourne Rebels got thrashed last week by NSW and they beat us tonight, that’s how low things have fallen.

And don’t forget the ACT Government is paying to keep this pack of real estate spivs on the road.

One would think the Brumbies would be aware Mark Gerrard, after the many years he kept the team in the hunt with his booming boot, was not to be kicked to when playing against.

But that’s how dumb these jokers are. 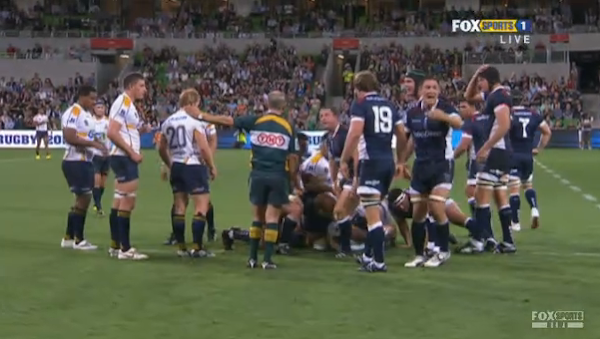 Horrible game, should have been a better flowing game for both sides with the caliber of players involved, Kaplan sucks the life out of Australian rugby yet again.

It wasn’t a total disaster and it’s small things that can be fixed. The thing is, do they have the smarts to fix it? I agree with the kicks to Mark Gerrard, I mean come on! And to think he wanted to to come back here and we said no. And Mafu’s penalty to lose it. It was soft sure, but within kicking range I’d take a punch in face face and not retaliate if it meant we’d win.

All the stats, except the one that counts the most, were heavily in favour of the Brumbies. They’ll be pretty dirty they lost I imagine. If there is disharmony in the ranks results like this certainly won’t help.

I was at the game, and it was a much better game of rugby than you’re making out. The Rebels, with all their individual’s experience, were bound to learn some lessons from the ‘tahs game and actually show up to play better as a unit this week. The Brumbies made so many minor mistakes when it counted and the Rebels did well to capitalise on those mistakes, but the Rebels were relying on Brumbies mistakes to make their plays. I feel the last penalty was so dubious it should not not have been given. The Rebels did not play well enough to deserve a win.

Also Johnboy, although you make a few valid points in your post it reads like someone a bit angry and bitter about losing, especially since its a ‘new’ team with the ‘they should be losing’ stigma. It sucks, but its week 2 and anything may still happen, and the reality is the Rebels haven’t played enough yet to show what they can do against the established teams. The Brumbies do have some work to do to bring themselves back to the scratch of a few years back as well.

Cheryl Thuillier - 46 minutes ago
Was a great place. View
Opinion 128

@the_riotact @The_RiotACT
In the last week alone, @genesisowusu took home 4 ARIA and two Triple J awards. We sit down with the #Canberra artist behind Owusu's most iconic piece of gold jewellery - his gold grill https://t.co/r576TmanM0 (35 minutes ago)