Brumbies of Old Rise At the Graveyard 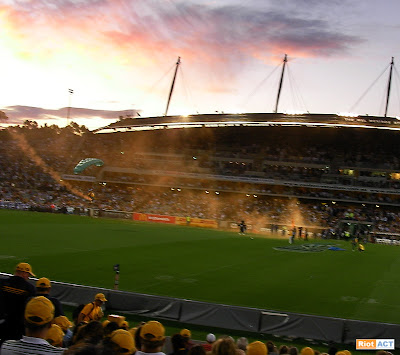 The previously undefeated NSW Waraahs came and left the graveyard that is Canberra stadium with plenty of bruises but zero precious Super 14 points in their collective pocket. Helped by a shaky Kurley Beale boot and a crowd who for 80 mins made a noise akin to a 747 landing, the Brumbies led from start to finish in an enthralling and brutal exhibition of rugby tarnished only slightly by incessant scrum-resets.

At the expense of sounding trite, it truly was a team effort from the men with the gold stripes along their chests. Every single player who took the field played with the absolute vigour and intensity. While the Tahs were probably the better team in the first 40, the Brumbies hung in there and deprived them of producing anything meaningful on the scorebored before trampling the flower-power in a masterful second half.

For me, Gerrard, Lealifano and Tyrone Smith stood out in the backs while in the pack George “I’ve never had a bad game in my life” Smith was a constant menace for the hapless Tahs. The great George Gregan also showed great competance in his new career running the touchline.

The only downside for our boys was an injury to Stephen Hoiles and a brutal KO (via elbow) to a very battered Mark Chisolm. But in a game as physical as this was, we probably got off fairly lightly.

Must have been a top night for those doing the Caps-Brumbies double!

He did look taller than Greegs on the TV though!

But any victory over the pretty petals is a sweet victory!

> Oh, and should add, the perfect end to the Oils concert (which included US Forces!!) was to find the Brumbies had done the hated Tahs..

I was getting SMS updates during the gig….helped me cheer even louder. 🙂

Oh, and should add, the perfect end to the Oils concert (which included US Forces!!) was to find the Brumbies had done the hated Tahs..

Berserk Keyboard Warrior I really enjoyed reading your post. Since the subject is sport this is bordering on the miraculous!

When we kept the ball in hand we actually looked like doing something positive. More positive at least than the poor options provided by poor kicking. If Beale had kicked straight….

P.S Apologies for the numerous typos and spelling errors. Fingers are still a bit shaky from last nights celebrations..

Fergus Thomson - 2 hours ago
Bek Clark I dunno about that, but after a series of operations, nurses are my heroes - I couldn't do what they do daily (incl... View
Bek Clark - 10 hours ago
Absolutely. They should get that just for having to work with doctors. View
News 24

Elizabeth Martin - 2 hours ago
All these comments that indicate they couldn’t even read the headline. It’s for public events - ie Floriade, Enlightened... View
News 6

Anthony Fleming - 3 hours ago
You have NPD. Enjoy.... View
Business 15

Paul Conn - 4 hours ago
Glenys is a great manager and one of the nicest senior colleagues I ever had the fairly brief pleasure to work with. View
Deborah Gale - 4 hours ago
A great boss and a nice lady. View
Karen Baldwin - 8 hours ago
Tania Parkes yep, me too View
Lifestyle 22

Sean McGrath - 4 hours ago
They are a gimmick and will 66 soon vanish like a Footsal pad. View
Arleen Stark - 8 hours ago
Considering the lonely scooter I see every day abandoned all over the city, I reckon it would take days, not hours, to find t... View
Teagan Erin - 18 hours ago
Shelby inside anu residences 😂😂 View
Opinion 96

Megz Bites Inglis - 7 hours ago
I think they are both a head ache, pretty much going round in circles. I think Dean has the weaker argument here. View
Liam Grimshaw - 12 hours ago
I’m vegan View
Buddy Edwards - 13 hours ago
Dean Newman you have given me a migraine reading your words. View
Breaking 3

jwinston - 14 hours ago
Let them go because they are under 14 and don’t know what they’re doing. View
News 32

The ACT Government will become the first in Australia to be able to declare public events single-use plastic-free under a...
Best of Canberra 23

@The_RiotACT @The_RiotACT
A beautiful diamond with a few rough edges… meet Nala, a beautiful, boisterous pooch who is at @rspcaact waiting to find the perfect new family https://t.co/Zs2Jwv8S8c (5 hours ago)

@The_RiotACT @The_RiotACT
The lovely four-bedroom, two-bathroom family home in Amaroo is ready & waiting for a new family to move in and make memories https://t.co/B659msa69u (6 hours ago)