Brumbies scrape home over the Cheetahs. 24-23

It was like watching hobos fight with star pickets for a pint of whiskey.

But of the two crap sides duking it out at the Stadium In Bruce ours wanted the whiskey more.

Foxsports have the report of a gutsy come from behind win by a team that played badly in general but with touches of promise.

Down 23-10 well into the second half it really looked like we were going to get thrashed by the worst team in the competition, at home.

But what the Brumbies of 2012 lacked in skill, flair, or execution they made up for in sheer determination.

Which, all things considered, is a great improvement over recent years.

Next week taking on the Chiefs and the rampagins Sonny Bill Williams will be the real acid test. 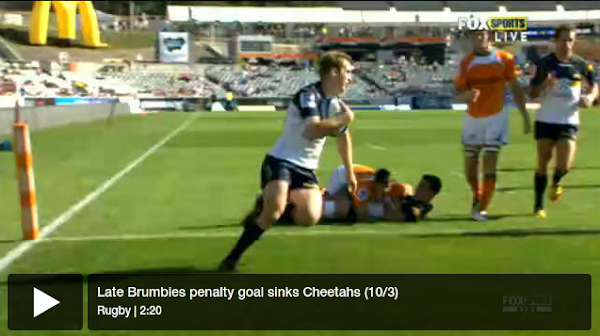 2 Responses to Brumbies scrape home over the Cheetahs. 24-23
Filter
Showing only Website comments

Possibly the worst Brumbies game ive seen in recent seasons. A wins a win but geeze they got lucky with that final penalty.

It may have been about as ugly as seeing Dame Edna showering, but a win is a win. I thought that Sam Carter had a particularly strong game.

Buck Johno - 17 minutes ago
From what I remember of night rider busses it was only over summer. View
PE TE - 9 hours ago
Sean Bishop but the Uber rapes have increased View
Kim Rumble-Kozjak - 19 hours ago
Jacqleequack it was all good fun until the two hour wait in the cab line, in stilettos, without a jacket in -2 🥶❄️ View
Property 28