Brumbies take the Chiefs down to the wire 29-22

The Brumbies didn’t win tonight. And I didn’t tip them to.

But I didn’t tip them to hold the competition front runners right down to the wire, away from home, either.

What they did do was play like a team of men who gave a damn, and they came within an ace of success (as is often the way with teams who play like they care).

Foxsports have the details.

But the important thing for the fans is that once again the Brumbies are playing like rebel angels.

A team from Canberra can’t win by playing the same game as everyone else in a comp against teams from Sydney, Auckland, Cape Town, etc. But in the past they’ve been willing to redefine the game, and tonight they looked like a team that can do that.

Losing always sucks. But even the best teams don’t win them all. Tonight they came very close to beating a great team away from home.

So here’s some Giambattista Marino for them:

We fought against the empire of heaven. We were – that I will not deny – vanquished in that conflict: yet the great intention was not lacking in nobility. Something or other gave them victory; to us remains the glory of dauntless daring. And even if my troop fell thence vanquished, yet to have atempted a lofty enterprise is still a trophy.

Here’s to rebel angels, may we see more of their like. 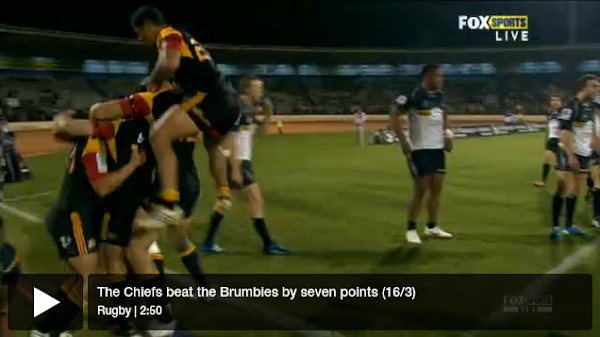 Proud of the way they played and completely stuck it to them. Some costly handling errors and mistakes due to inexperience, but hey I didn’t mind them losing,

‘…What though the field be lost?
All is not lost—the unconquerable will,
And study of revenge, immortal hate,
And courage never to submit or yield:
And what is else not to be overcome.
That glory never shall his wrath or might
Extort from me. To bow and sue for grace
With suppliant knee, and deify his power
Who, from the terror of this arm, so late
Doubted his empire—that were low indeed;
That were an ignominy and shame beneath
This downfall; …’
Milton, ‘Satan’s motivational speech for the Brumbies, 2012’.

Although some think that angels, fallen or otherwise, look more like AFL players than rugby players.

Excellent display, showed a lot of heart to get back to 22 all. If the ref called that forward pass inside the Chiefs 22 we would have won I reckon.

Brumbies were extremely unlucky not to at least come away with the 22 all draw. Signs going forward a very positive though. It’s a young side who are performing at a higher level than expected.

Gabriel Spacca - 2 hours ago
By 2027 I hope to be able to retire and move to a community that is less at the whim of developers. View
Capital Retro - 5 hours ago
"by 2045 there won't be anyone car maker in the world still making petrol vehicles, and a good thing too." Remember "peak pet... View
Tom Adam - 5 hours ago
And yet we keep pointing out that Mawson is a much better terminus for stage 2B to remove bus trips of 1 stop for thousands o... View
Community 16

Caroline Le Couteur - 4 hours ago
Good work View
Natalee George - 7 hours ago
Louise Bilston you definitely were a big part of me getting back into coaching 💙💚 View
Louise Bilston - 7 hours ago
Thanks Brendhan! NACT couldn’t ask for a better Chair for their FARM committee. You have big shoes to fill following Scott... View
Community 12

Olympia Muir-Williams - 5 hours ago
Molly Salim as the person who brought frugii into my life i want to grieve with you View
Jas Alice - 6 hours ago
Alexander Kary omg noooo thats awful! View
JS9 - 6 hours ago
Such sad news to hear of the passing of someone that has brought such happiness to so many! Condolences to his family at this... View
Opinion 3

cockneyreject - 5 hours ago
There’s a lot of good down here in Canberra but there is a certain insularity and in some ways management is a generation b... View
Property 4

tr0jan - 7 hours ago
I grew up in Narrabundah, Danny’s bakery has been there as long as I can remember and our family have been enjoying the del... View
sebastiancampbell - 9 hours ago
I think that the traditional atmosphere and service in Danny’s is fantastic. It is something that is sadly lacking in the f... View
Katie Humphrys - 10 hours ago
You sound nice. Drop in and introduce yourself one day! If it was as bad as you describe funny how it’s still going; must b... View
Opinion 5

c j - 10 hours ago
Indeed. Completely overlooked the negatives and displacement that this will bring thousands of Canberrans View
News 11

The owners of the Zoo Bar and Grill are taking Canberra's nightlife to the next level by launching the Mile High...
Community 12

@The_RiotACT @The_RiotACT
Relax with rhinos and giraffes as the @national_zoo & Aquarium offers a series of unique morning yoga classes among the animals https://t.co/qIekMt93ot (6 hours ago)