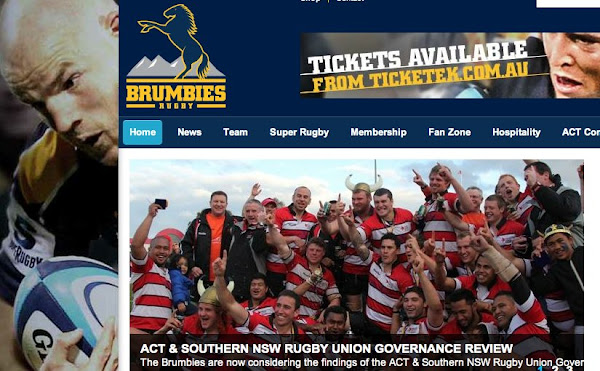 The Brumbies have announced Dr Michael Crawford plans for the governance of the ACT & Southern NSW Rugby Union.

• The Brumbies (team and commercial business) be managed through a wholly commercial entity separate from ACT&SNSWRU, to which ACT&SNSWRU leases the intellectual property and management rights for the Brumbies, while retaining ownership of those rights.

• ACT&SNSWRU be conducted as a volunteer driven organisation, focused on actively managing the health and growth of Community Rugby in the ACT and Southern NSW.

• The licence fee from the new Brumbies organisation is set as a proportion of its revenue, at a level that ensures a substantial increase in resources available to Community Rugby.

• The licensing arrangements also include a share of any increase in the value of net assets of the Brumbies organisation (including net of any capital contribution by other parties).

• ACT&SNSWRU decide whether to seek private investors to manage the Brumbies or to establish a Rugby community aligned entity for that purpose.

What do we think sports fans?

Lindi Loo - 56 minutes ago
Are these two 'paid actors'? If not, they should be! Brilliant 😂👏... View
Emily O'Shea - 58 minutes ago
Jen O'Shea watch the video in this View
Shannen McCann-Geiger - 3 hours ago
The wife looks super happy to be there View
Sport 130

Jim Reid - 56 minutes ago
ACT Govt doesn’t need any more $$ they’re literally the worst financial managers and they wouldn’t be transparent as to... View
Graham Smith - 1 hour ago
Michael good suggestions. Another consideration is certainty that the revenue from pay parking is well and truly sufficient t... View
Simon Ford - 2 hours ago
Bev Anderson paid parking and a toll on the road to get you there. Then you can be just like Sydney! 😁 View
Lifestyle 10

Chris Partridge - 58 minutes ago
Denise Show Monica... View
Kathy Johnson - 2 hours ago
Barb made our eldest sons blanket 38 years ago, then the blanket was passed on to our eldest grandson 11 years ago. Our blank... View
News 6

Jon Billows - 1 hour ago
Warwick Bradly Canberra doesn't have a price cycle like other states, just constantly expensive. Other states prices fluctuat... View
Warwick Bradly - 1 hour ago
Did you not read the article? All cities are copping higher petrol prices. If you check Petrolspy.com, you'll see Canberra ha... View
Opinion 18

The number of wild horses in Kosciuszko National Park would be slashed under a new proposed plan to manage their...
News 51

An ACT public school principal has come out against the ACT Government's COVID-19 vaccine mandate for teachers in a Facebook...
News 55

@the_riotact @The_RiotACT
Former #gambling addict Markus Fischer used to win big, but then he began chasing his #losses and his life spiralled out of control. Now reformed, he's encouraging others to seek #help during Gambling Harm Awareness Week https://t.co/fzdCR1Zec7 (13 minutes ago)