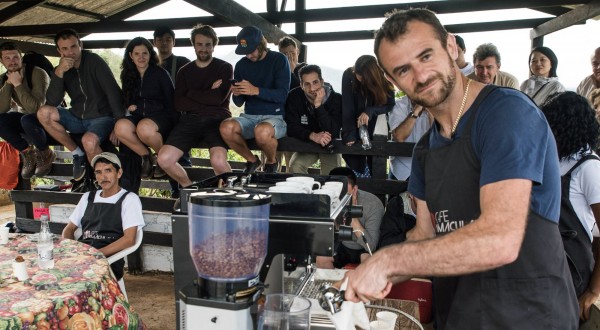 There is one man, a Bosnian who came here to make a difference and is doing so in a dramatic way in Canberra, to whom we must pay tribute – it’s the coffee man, Sasa Sestic, who has had a movie made about him that I have just finished watching. It was inspiring to find a man so passionate, so dedicated and so possessed in his search for the perfect cup of coffee.

Sasa himself says, “I don’t think I will ever have a perfect cup of coffee,” as he scours Ethiopia on a ten-day, eight-hour-a-day tour looking for the perfect cherries (where coffee beans come from).

He says in the video, “I’m like a kid in a lolly shop,” speaking of his findings of the perfect coffee beans in and around Bonga in the Geisha forest, where wild, natural coffee trees grow. “My wife will kill me, as I have three containers now shipping to Canberra rather than just one, which was what I promised her I was doing.”

“I believe the relationship between farmer and barista is prime.” These are the words that set him apart from most coffee shops. The fact that he scours the world for the best coffee he can find and makes deals with the growers themselves, means that he is cutting out the middle-man and the end product, the coffee you sip in his coffee shops, will be among the very best you can find in this town.

His young daughter, Ana Sestic also tells us that her dad, “is obsessed” and his whole family surrounds him in a loving, supportive way. His wife accompanies him (along with his team from Canberra) to the World Barista Championships, and as we watch him (on the video) on the fourth day of the Finals, even though he was very sick at the time, he was in control and it was obvious that he saw this as his best shot.

After a few tense moments, when we heard the announcements regarding the final placings in this prestigious competition, France was announced as taking 6th place, the UK 5th place, 4th was taken out by Hong Kong, 3rd Canada (and by this time we can sense the sweat on Sasa’s brow, the tension he must be feeling through knots coursing through his stomach and in ours), US in 2nd place and then a pause – as you always get when such tension builds. What excruciating agony that must be for the remaining contestants.

“1st place goes to Sasa Sestic, from Australia!” As Sasa was handed the trophy, his bear hug that went for far too long, and the emotion on his face told the full story. This man put everything he had and then some, into this competition and he absolutely deserved to win it!

This wonder of wonders, this uniquely passionate Bosnian-born Canberran, did us proud on the world stage. Isn’t this what makes multi-cultural Australia the best country in the world? Aren’t stories like these the stuff of our national dreams? He trained at CIT, right here in the capital, and he’s truly one of our own.

In terms of business, this is what bucking the trends means. To me at least. Someone who has inordinate passion, extreme work ethic and a plan to build something unique, and is able to commercialise their dreams.

ONA coffee is the result of this man’s dream. I was privileged to have a tour of their factory in Fyshwick, with Jordan, their marketing manager, where they roast their own coffee blends and supply other cafes with their coffee, as well as run barista courses.

There are three cafes within the organisation at the moment, where you can have that coffee experience: ONA coffee house, in Fyshwick, The Cupping Room in the city, and ONA on the Lawns in Manuka.

You might also (like me) ask yourself what is the term “cupping” exactly? Well, apparently it’s like a wine tasting is to wine, but it’s a coffee tasting. There, I learnt something new!

Their website states: “Welcome to our passion. We believe that coffee is more than just a drink. Like a great wine, truly great coffee tells a story. It’s a story of community, history, culture, climate, time and, above all, passion. That’s where the ONA story began. With one man’s passion for the perfect cup of coffee and his obsession to find it.”

“Via our ethical trading company, Project Origin, we source the highest quality green beans produced in the most sustainable ways possible, deal directly with producers and empower communities in Ethiopia, Colombia, Honduras, Rwanda, El Salvador, Panama, Nicaragua, and India, among others.”

The company has won several awards so far (watch this space), including Sasa’s World Barista Championship in 2015 and Australian Barista Champions 2015 (Sasa again) and in 2016 (Hugh Kelly).

I would highly recommend you read the article in the News section of their website, which discusses the Origin Project and begins with: “If we give these people a little more care, a little more love and we can pay them better wages, do a little bit more…we won’t just have better coffee, but we’re going to make a real change.”

Is this company bucking the trends? You betcha!

For a real experience of the sensual, go and have your next coffee in one of their three coffee shops.

Julie Macklin - 8 hours ago
Fortunately the long grass looks prettily scenic, until they do get to mow it. View
Tom McDonald - 8 hours ago
Correct. Same complaints year after year. View
Nathan Horton - 9 hours ago
Julie Macklin they have known for 3 months it is going to be a wet spring and summer. Yet chose not to be proactive and prepa... View
Community 4

ssek - 17 hours ago
Give it time and the greens will have all kinds of legislation around halloween to prevent children having fun. View
News 1

ssek - 17 hours ago
These marine parks are ridiculous. Stopping a few people with a rod and fishing line from catching a couple of fish does not... View
Opinion 5

Capital Retro - 18 hours ago
I don't agree with a few of your claims. I am a senior person and at no time in my life have I ever heard of house ownership... View
Motoring 10

oh_ - 18 hours ago
As much as the noise, disruption and burnout smoke is trying for nearby residents, it does bring money and something differen... View
Rob Thomas - 1 day ago
Floriade? View
Tim White - 1 day ago
David Perkins you do know that it created jobs and brought millions into our local economy and in some cases kept many small... View
News 7

Chris Hobbs - 20 hours ago
Will ACT residents benefit from 30% canopy cover by 2045 from a massive tree investment, yes! Will we need to remove some old... View
Alice Paris - 21 hours ago
I dont think you understand what is happening here Chris. The Greens and Labor are responsible for the removal of so many mat... View
Bill Gemmell - 21 hours ago
Alice Paris I think people need to talk to their MLAs and let them know how the feel about various issues. I certainly will b... View
Food & Wine 32

ACT Policing has a blunt warning for e-scooter users: be an idiot and you will face the consequences. With e-scooters...
News 83

Leadfoot drivers beware - the ACT's speed detection net is about to be widened with the addition of two new...
News 83

The Best Coffee Shops in Canberra

@The_RiotACT @The_RiotACT
The election's over and it's time for some fun. Our poll this week asks if we should celebrate Halloween or if it's commercialised nonsense https://t.co/JvbB9hOhZp (9 hours ago)

@The_RiotACT @The_RiotACT
There's plenty happening in Canberra over the coming week. Here are ten great things to do in the next seven days https://t.co/u9dwGfwghO (10 hours ago)