Bucking the trends in business – Big and Tall 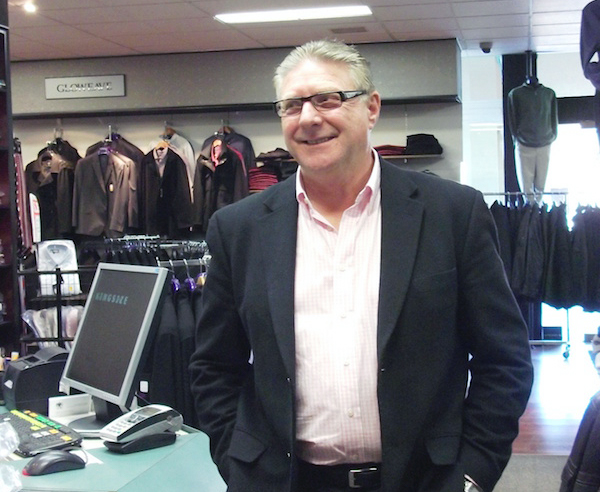 Remember when we used to say that “cash is king”? Well, today times have changed, and in a global retail world, it is more accurate to say that “niche is king”. That is why I recognised that Gary and Lyn Rumble run a little gem of a retail business, right in the heart of the city. Kingsize Big & Tall, located in the Melbourne building and commonly referred to as the “Paris” side of town, is a boutique menswear shop which caters for men who are king size, big, or tall.

Their website boasts: “Our aim is to provide fashion and business clothing, footwear and accessories for the man who struggles to find sizes that fit in mainstream stores. We have clothing for large men, tall men, and large, tall men. Our emphasis is on providing a range of good quality fashion clothing for the fashion-forward young man, along with the more traditional older gentlemen.”

Their service is so good that most of their customers are regulars; long-term clients who often found out about the shop through referrals.

The owner, Gary Rumble, is a local lad who grew up in Canberra. He went to Telopea Park high school and graduated in the class of ’72. After school, like many other young fellows, he wasn’t sure about what he wanted to do, so he tried lots of odd jobs and eventually ended up in the public service, working for the Department of Immigration. He found after a few short years, however, that the public service was not for him, and so he sought opportunities in other fields.

He did some interesting work in marketing and even had a stint in radio before buying into a bedroom shop in Belconnen, which specialised in manchester and new waterbeds. It is then that Gary discovered he loved working in the retail trade and especially conversing with customers. Wishing to end that partnership, Gary sold his share and bought into a menswear store in Cooleman Court called Swannies. This menswear store had a section with “big men’s clothing” that only took up 20% of the floor space ­and did not have much variety. He then realised that the demand for this category of clothing was greater than they could supply.

Following this revelation, Gary and Lyn travelled to the USA to join a buying group for “Big and Tall” menswear stores. They came back convinced that specialisation in that concept was the way to go and opened a store in Canberra City 17 years ago called “Kingsize Big and Tall”. When they moved, they found that people followed them to the Melbourne building, which helped establish the new business. Eventually, the store became affiliated with the Kingsize Group, which established multiple stores Australia-wide. With the advent of online retailing, they created a website called bigandtall.com.au, which has also become a successful online enterprise. The aim of the business is to cater for big and tall men who want to be just as fashionable as the rest of the population.

I met up with a customer and fan of the brand, who told me, “I’ve been searching mainstream shopping malls and found that most of them only offered clothing for young, skinny males, and offered nothing for real people. Then, when I found this Big and Tall store, it was a godsend. I finally had some choices. Thank goodness for this store. I am sure I am not alone in appreciating the range of clothes on offer for real people like me!”

Gary occasionally travels overseas on purchasing trips exclusively for Big & Tall. He is able to do so because of his tremendous staff who have been with him for a long, long time.

“They are really good at what they do. They learn their trade through bricks and mortar, but can equally fulfil online orders as needed”, he said.

A large proportion of the clothes they sell in Big and Tall come from Australian suppliers who have factories and warehouses in Asia, with a few more suppliers from Denmark, the UK, and a select few countries in Asia. They source extra-long pants, long-sleeved shirts, large shoes and all kinds of fashion for men young and old, and boast a supply of well-known, exclusive fashion labels like RM Williams and others that have an equal reputation for quality and panache. Their main clientele falls between the 20-55 year age range.

Online sales are targeted only at an Australian customer base for now because Gary is adamant that they need to conquer the Australian marketplace before selling into other countries. He is quite the savvy entrepreneur and loves the brand they are creating. Gary says they won’t be moving anywhere anytime soon, and if he had an exit plan it would be to sell to someone who knows a lot about this niche and could take it to another level.

For now, though, Gary and Lyn are not keen to move on and are enjoying their enterprise, with plans to keep improving it.

His advice to new retail business owners is, “Look for the bit others won’t do, and do it in the very best way you can.”

Well, that is what he has done, and it is working well for him! Big and Tall is certainly bucking the trends

Michael Hardy - 36 minutes ago
it needs to be moved View
Më Batterbury - 5 hours ago
I think 50 is ok but 40 is just ridiculous View
Jazzy Dhooria - 6 hours ago
You voted them in... Just sayin View
Property 1