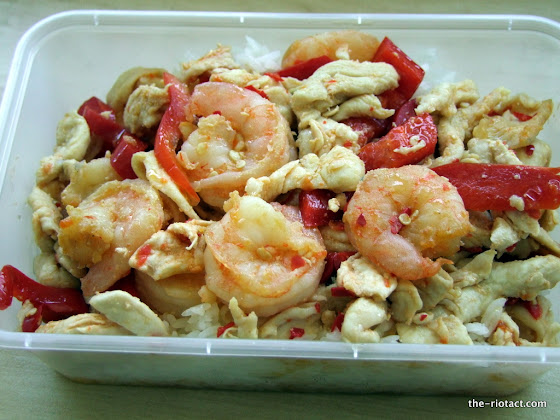 The simply named “Burmese Curry Place” in the bus interchange is a relatively new player in Civic. As we’ve recently learned that RiotACT is banned in Myanmar it seemed like a good time to give it a try.

They’ve got a simple, but charming layout and for $7 takeaway they load up rice with curry and have you on your way in no time flat.

I went for the “Chicken and Prawn Curry”.

It’s not the most appealing thing to look at. Nothing like the rich thick sauces of Indian curries.

But after a couple of mouthfulls?

It’s got some zing without being overbearing and the sweetness of the red pepper sets off the other salty flavours perfectly.

I was seriously impressed.

The 4 & 9 (fish balls with the vegetables – beans, potato and carrots strips) is pure heaven for $7. Love the thick spicy hot sauce and the cruch of the vegetables. It’s the best of all the dishes! The family running it are great too.

not recommended for vegetarians. inoffensive but boring vegetarian curry.

Got to agree with the review. It looks dogy and its cheap. I even love the number system, I’ll have a number 2 and 6 with rice…

Love the Egg curry as well and its got some spice/heat to it but just enough, without killing off the flavour.

Great relevant reviews for the more frugal of us here :). Thank-you!

I always try and go here whenever I’m in civic for lunch. Unpretentious with wholesome servings and fantastic tasting curries for a seriously good price.

It seems the whole family works the kitchen and the counter which adds a bit of charm too.

Phil Hopkins - 7 minutes ago
Tim Cole But through the middle of a suburb????... View
Tim Cole - 8 minutes ago
Heaven forbid that we build transport infrastructure for the greater good of everyone. View
Shiva Sapkota - 19 minutes ago
Geoff Richardson it’s actually 40 as per the mayor... View
News 5

Ricky Toms - 14 minutes ago
Hopefully Vodafone View
Ann Parker - 4 hours ago
A lookout would also be lovely View
Annie Clarke - 8 hours ago
What is also needed is a rest area with a toilet half way, on both sides. View
Opinion 30

John Elliott - 53 minutes ago
I used to vote Labor when Jon Stanhope was running the show and I voted for Katie in 2012 ... But the current Labor leader Do... View
Michael Quirk - 5 hours ago
Barr is no visionary. He makes decisions without evidence. Stanhope is right to expose... View
Leos Nikias - 5 hours ago
Zakzook Chico There were a few other failures by him.... View
Community 9

Marea Fatseas - 9 hours ago
Ashley Wright sorry, can you please explain how it makes sense to make Canberra a magnet for waste from interstate? When I lo... View
Ashley Wright - 12 hours ago
Alex Troy Elsworth Adkins it makes sense to me too. But FYI the sidings have long been removed. The space is still there to p... View
show more show less
*Results are based on activity within last 7 days

There is a convention that former political leaders are supposed to stay out of the spotlight once they have left...
News 35

@The_RiotACT @The_RiotACT
Chief Minister Andrew Barr has stepped into the row over Geocon's plans to build a 6-8 storey apartment building in old Kingston, saying the proposal goes too far and is not the right fit for the suburb https://t.co/kvWSsXddLL (46 minutes ago)

@The_RiotACT @The_RiotACT
It's tax time again, and the ATO says it is making things easier this year, given it has been an unusual one for many people. Here are some things to keep in mind when doing your return https://t.co/KzJMzg2nIS (1 hour ago)