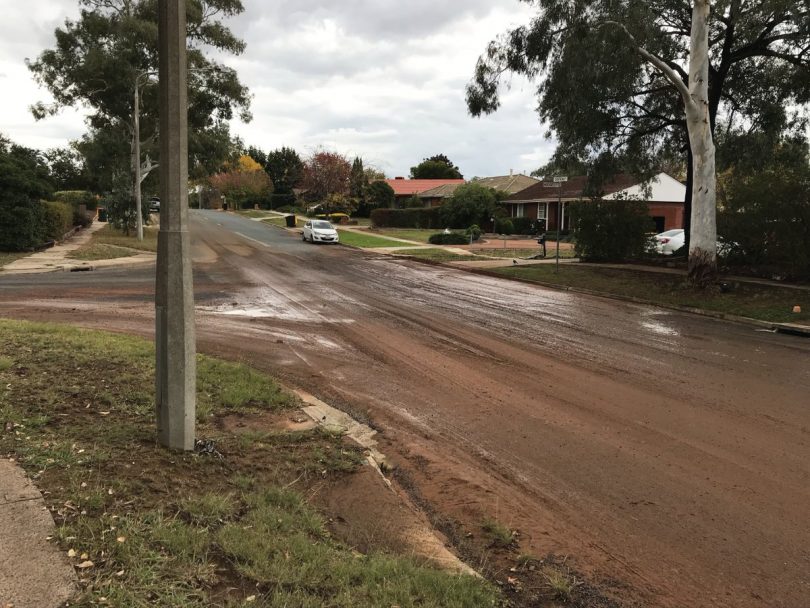 Flooding in the Higgins area has subsided and work continues to repair the burst water main. Photo: Supplied by Icon Water.

A burst water main has caused flooding in the streets of Higgins as well as water discolouration and reduced water pressure across Belconnen suburbs on Thursday afternoon (2 May).

The large water main burst on the corner of Kingsford Smith Drive and Castieau Street around midday, flooding several nearby streets with muddy water.

An Icon Water spokesperson said flooding in the Higgins area has subsided and they are repairing the burst water main.

Tap water across Belconnen suburbs may be affected over the next 24 hours, with water discolouration and reduced pressure to be expected.

“We are working to flush the sediment that has been stirred up by the burst water main. This is expected to reduce the duration of discolouration,” Icon Water said.

St Francis Xavier College decided to send their students home as a result of the burst main.

Ewww. Hey #canberra @ACT_ESA @The_RiotACT @actgovernment Anyone else getting this effect? It's actually getting worse. pic.twitter.com/ClONZxKjk3

Robyn Baer - 43 minutes ago
Drove back today. LOTS of potholes due to the rain. View
Jenny Drenkhahn - 7 hours ago
not to mention changes further South in the Bega Valley Shire; rebuilding in Cobargo and Tathra, Twyford Hall in Merimbula ;... View
Lifestyle 9

Doug Jackson - 55 minutes ago
Really bad plan. If you need a fence then you may not be paying appropriate attention to your child. Even with a gate somebod... View
Cary Elliot Johnson - 5 hours ago
Claire Lee Koo because its a democracy with varying opinions on an open column. View
Elizabeth Jones - 5 hours ago
I saw the petition but it wasn't clear it was supposed to be a few fenced playgrounds per region. I know being in an older pa... View
Opinion 67

@the_riotact @The_RiotACT
They may not be haute cuisine, but #local cookbooks are full of treasured family #recipes for everything from apple cake to homemade Irish liqueur. What's on your shelves? https://t.co/nHni3nSBrk (54 minutes ago)