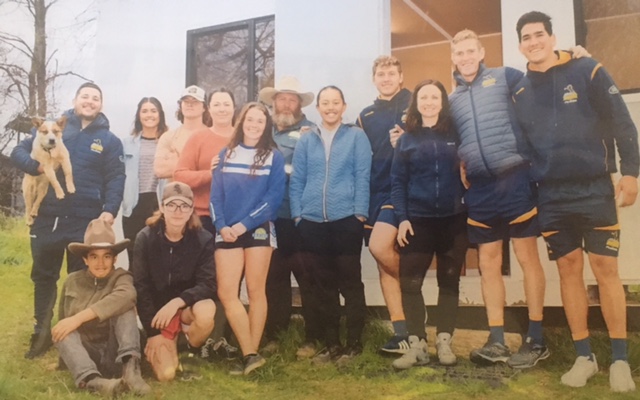 A photo saved from the bushfire shows the Bellchambers family with visiting Brumbies players. Photo: Supplied.

A year after Steve and Vicky Bellchambers lost their house, farm, machinery, sheds, vehicles and business from bushfire, the couple is still waiting to rebuild for their children and foster children.

The bushfire tore through their Batlow farm on 4 January, 2020. Vicky and the children left to find refuge while Steve stayed to defend their neighbour’s property.

Most of Steve’s livestock survived, however he lost a stud bull and 12 horses and he has been unable to continue his rural and environmental contracting business that was run from the house. This is due to the loss of equipment in the fire and the fact that Steve is still recovering from a major car accident almost two years ago that affected his brain.

Fortunately, Vicky has been able to continue her employment as a social worker at Anglicare, helping at-risk children. Steve has also been busy with the clean-up and managing the farm.

Since the bushfire, the community-minded couple, their four children and two permanent foster children have been living in the manager’s quarters on an orchard owned by Batlow apple grower Ian Cathles.

However, they have to move out by mid-February so contractors can move in to help Ian pick a good crop after he similarly lost eight hectares of apple trees in the fires. 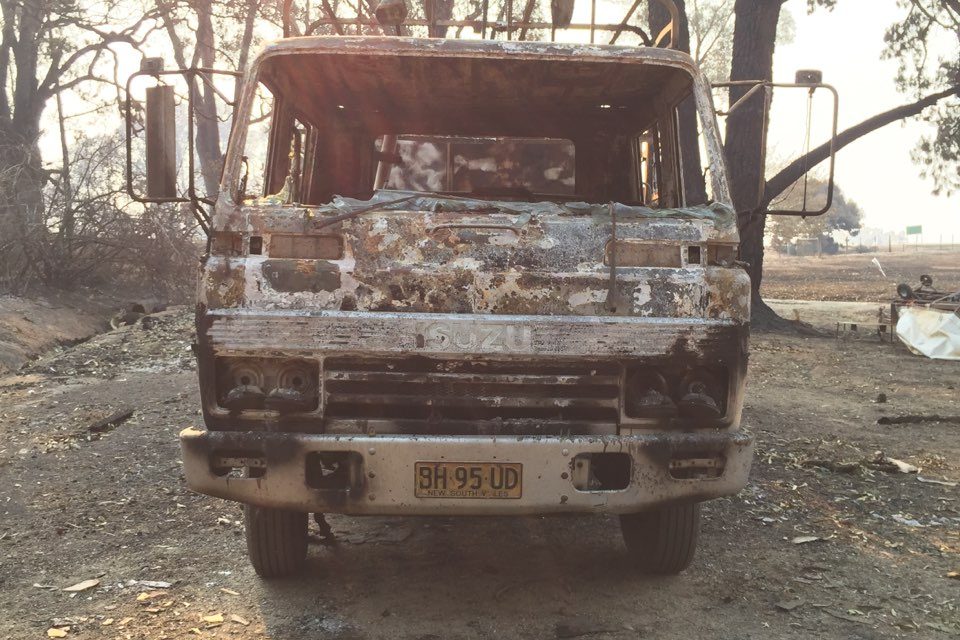 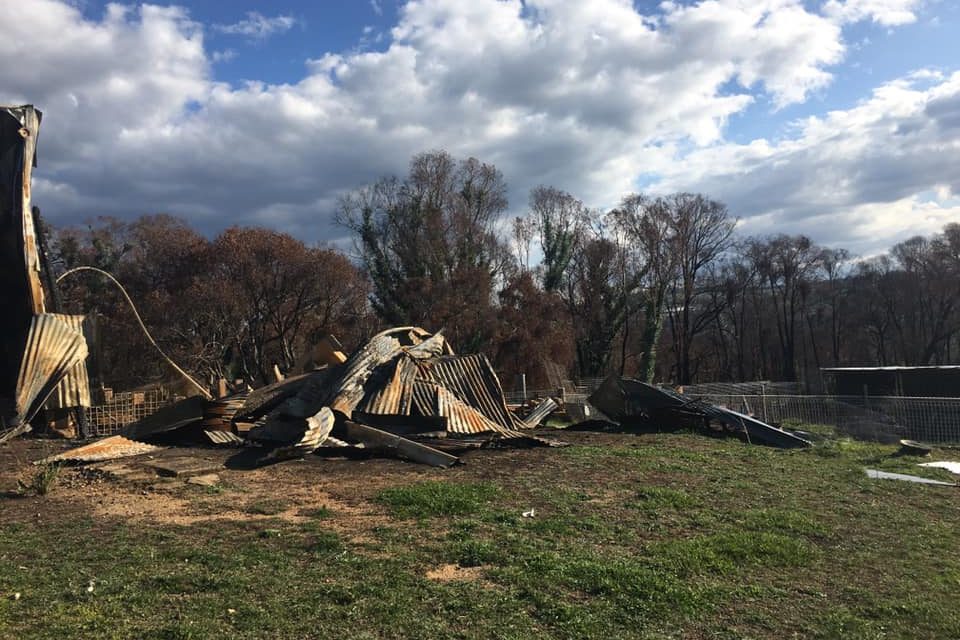 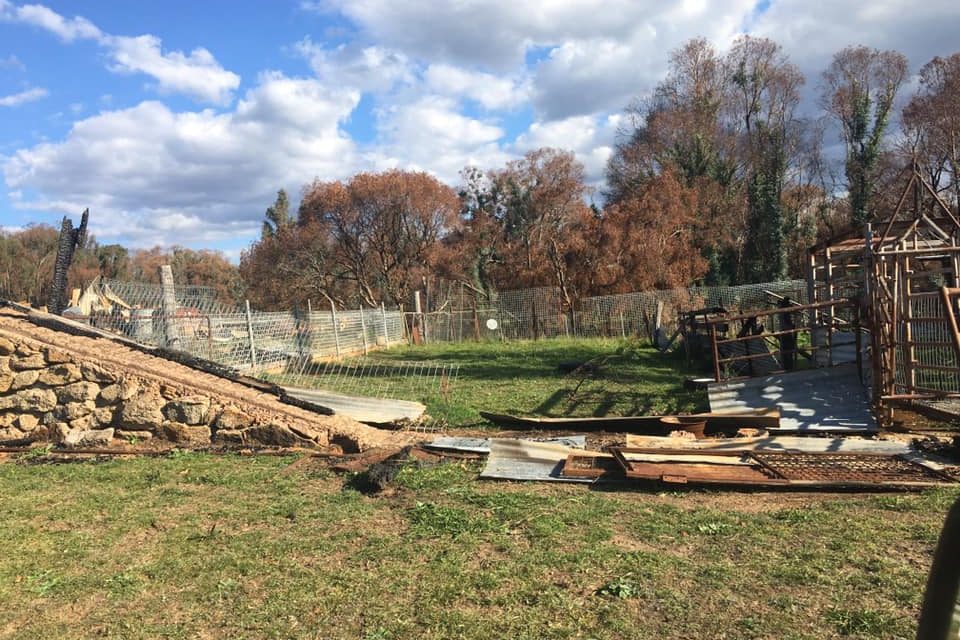 Steve and Vicky hope to receive short-term public housing assistance, but plan to rebuild a big enough house at their Batlow property in the long-term for their current children and more foster children.

The selfless couple’s foster journey began in Queensland where Steve and Vicky had unofficially taken in children in need for many years.

They decided to become formal foster parents when they moved to NSW about 12 years ago. Now they have two permanent foster kids, an adopted grandson and will hopefully have more when they return home to their property.

The site of their former family home of five years has been cleared and deemed safe to rebuild.

Originally their plan was to build an environmentally friendly, fire-resistant house that could serve as a proof-of-concept, available for the public to inspect. They even had a construction company onboard that builds modern carbon fibre houses, and had generously offered to match the government grant. However, there has been a recent setback.

Steve and Vicky were eager to rebuild a rural house that suited the country, however the construction company only had one design in mind that was like “two shoeboxes put together”, says Steve.

The family needs a house that will support them for the foreseeable future, and must provide each foster child with their own room.

The couple hopes to have at least three bedrooms for additional foster children, and had to decline the chance to build a carbon fibre house based on the shoebox design.

Now they are back to the drawing board to see how far their budget can stretch. However, Steve is adamant their new house will still be environmentally friendly.

“We’re very keen to do things better,” he says. “I think this is an opportunity for people to look at what they had and step forward from that.”

The Bellchambers are reluctant to ask for help, and despite their own trauma they have spent the past year helping others.

Straight after the bushfires, they set up a depot for farmers to collect hay and talk to people as they overcame the shock. They also plan to use their business insurance to establish an emergency assembly point for people and livestock in Batlow that was missing during the Black Summer.

“We live fairly old school, and part of that is helping each other out,” says Steve. “You don’t look up at how big the hill is, you just keep looking at the ground and walking.”

A GoFundMe page has been set up by Adrienne Steward, who ran the Yass Bushfire Relief Centre during the Black Summer bushfires. She met the Bellchambers while delivering supplies to the Snowy Mountains.

The page had aimed to raise $40,000 towards the carbon fibre house. So far, $5193 has been raised and Adrienne says the money will be redirected to the rebuild despite the recent setback to the carbon fibre plan.

Steve had hoped to rebuild within the next four to five months but now doesn’t know when his family will be able to return home.

“It’s just a matter of time unless someone knows the magic lotto numbers,” he laughs.