I spoke to Luke Moseley, the man behind the musical project Butternut Sweetheart about his self-described “underwater post-apocalyptic indie” debut single, Paper Cut. He tells me that he was hanging out next to the ocean a lot and learning to surf while he was writing the single and other songs for this project, and it was that “pseudo-drowning kind of feeling” that comes with learning to surf that inspired the music.

“A lot of the production elements make me feel like I’m being held underwater, and then I get a moment of clarity somewhere later in the song.” 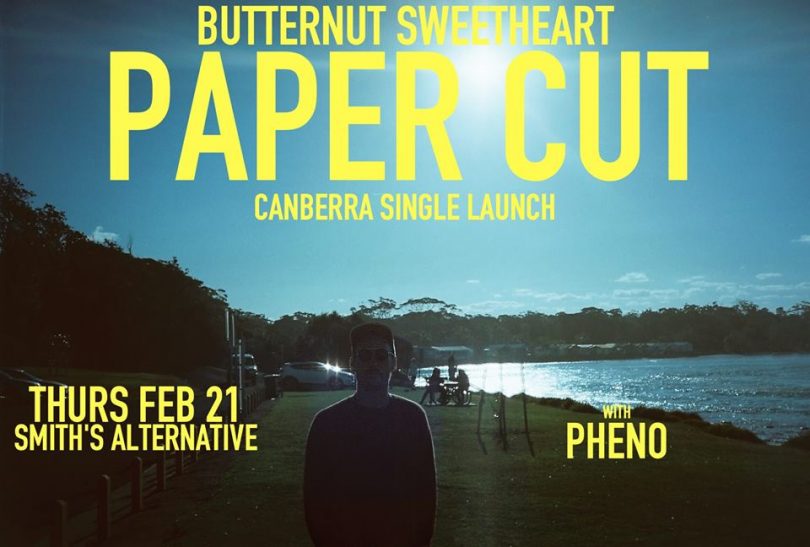 Butternut Sweetheart is a pretty quirky name to bestow upon yourself, and when I asked Moseley how he settled on it he explained that he always finds it really stressful to think up titles for things, “but it could have something to do with the fact that I used to eat pumpkin every single day for an 18 month period.”

Moseley has been working in the music industry as a guitar tech for a few years now, setting up for other artists’ shows. This experience has undoubtedly influenced his own music career. “It’s difficult not to absorb some kind of inspiration just by being around so many musicians, and gigs and audiences. It’s really infectious.”

Some of the artists that Moseley has worked for in the past include RUFUS and Ball Park Music, who he cites as some of his important inspirations for this project along with DD Dumbo and Unknown Mortal Orchestra.

We can expect to see Butternut Sweetheart’s sophomore single released in May of this year, and soon after that he will be going on tour with Ball Park Music.

Stu Williams - 3 minutes ago
If they are considered old enough and mature enough at 16 to influence an election that affects the entire country, they are... View
Noel Benjamin - 8 minutes ago
My frustration with the Greens is that this party appears to be engaged with peripheral issues. I hear very little of its pol... View
Brian Ashcroft - 23 minutes ago
David Chadwick pointless View
News 14

kenbehrens - 47 minutes ago
Has anyone ever been fined for smoking at a bus stop? Has anyone been fined for not wearing a mask on public transport? There... View
Nathan Lofthouse - 3 hours ago
Complete with Benny Hill music View
Steve Frame - 3 hours ago
What are these for if not a quick scoot to Braddon for a pub scoot? View
Opinion 77

Patrise Dowling - 53 minutes ago
Nah. Get a dog. Demand free love. View
Michael Strand - 1 hour ago
So when she asks if she needs to lower her standards, what does that mean? Maybe looking at a guy is not not 6ft tall, or a t... View
chewy14 - 1 hour ago
This!! The author even admits as much when she talks about "settling" in such a strange way. Too many people these days have... View
News 29

Chris Thomson - 57 minutes ago
Wayne Britten got a hotline direct to the manager now lol View
Wayne Britten - 1 hour ago
Chris Thomson sounds like you rung that number a few times mate View
Sharron Baig - 3 hours ago
So what is it you's will actually go out for, when you's are called?????? View
News 72

BlowMeDown - 3 hours ago
I recall my father and I taking the boat out on the western shore in the mid 1960s, where the water has yet to return. It was... View
Capital Retro - 3 hours ago
I think groundwater that enters the artesian aquifers originatesin mountainous country through rock strata. The water in Lake... View
Patrick Keogh - 3 hours ago
What percentage goes into replenishing groundwater compared to what is list to evaporation? View
Food & Wine 8

@the_riotact @The_RiotACT
Looking for something to do in #Canberra this week? From #Christmas markets to Korean #films, here are 10 things to do in the capital https://t.co/FGRP1gEBLz (25 minutes ago)

@the_riotact @The_RiotACT
Virgin is restarting its Canberra-Sydney service using Link Airways planes, with up to nine flights per weekday https://t.co/QGcgoaSMTa (30 minutes ago)

@the_riotact @The_RiotACT
Should young people aged 16 and 17 have the right to #vote? The @GreensACT have introduced a bill to lower the voting age https://t.co/p7JvzQmHs9 (2 hours ago)