Buy your own landmark hill, home and fine wool operation an hour from Canberra 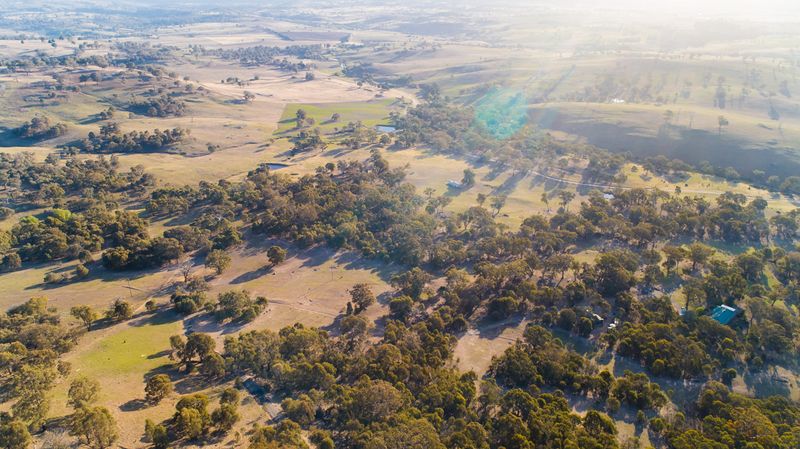 The 150-acre Bowning Hill property is on the market for $900,000 and includes a four-bedroom home and a landmark hill with stunning 360-degree views. All photos supplied by Ray White Rural Canberra & Yass.

Every thought of buying your own landmark hill and enjoying stunning 360-degree views?

Reigning world target crossbow champion, Stuart Atkins and his wife Frances are selling their Bowning property to relocate to the UK and with it comes a four-bedroom home, 150 acres and even a dormant volcano.

Located under an hour’s drive from Canberra and four minutes from the historic town of Bowning, the property boasts views of as far away as Black Mountain Tower and is currently set up as a fine wool operation. 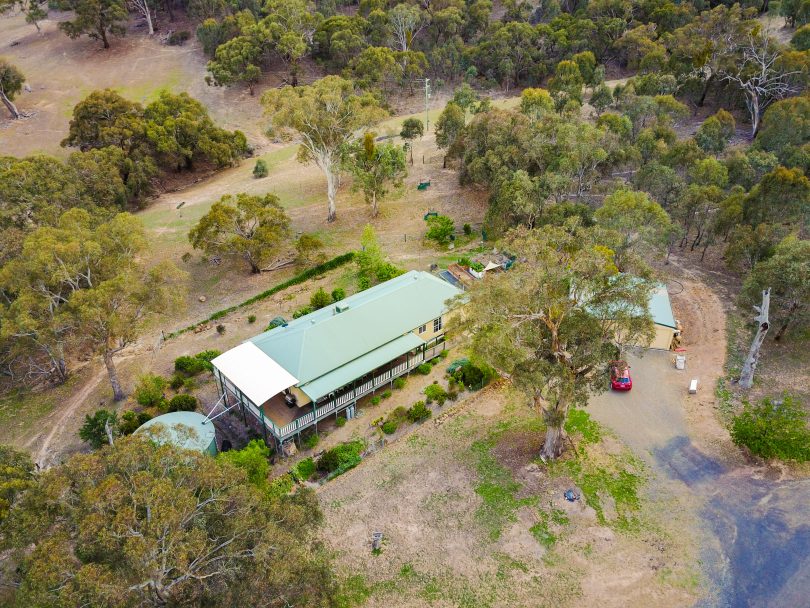 Listing agent George Southwell of Ray White Rural Canberra and Yass said that anyone who has ever made the trip along the Hume Highway, past Yass and Bowning, will be familiar with the hill that sits atop the Hume Highway.

“It’s not too often that you get the opportunity to purchase such a landmark, that thousands of people drive past every day,” Mr Southwell said. 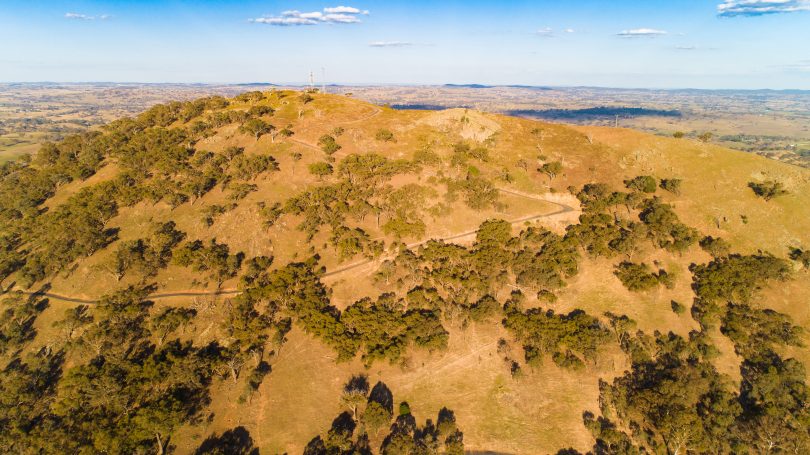 “The views are amazing over the Yass Valley to the Brindabellas and beyond, overlooking the centre of our democracy.

“Few people know that a paddock on the property was once a World War 1 rifle range. The property has many interesting landforms, it is one of the only opportunities I have heard of to own a dormant volcano.” 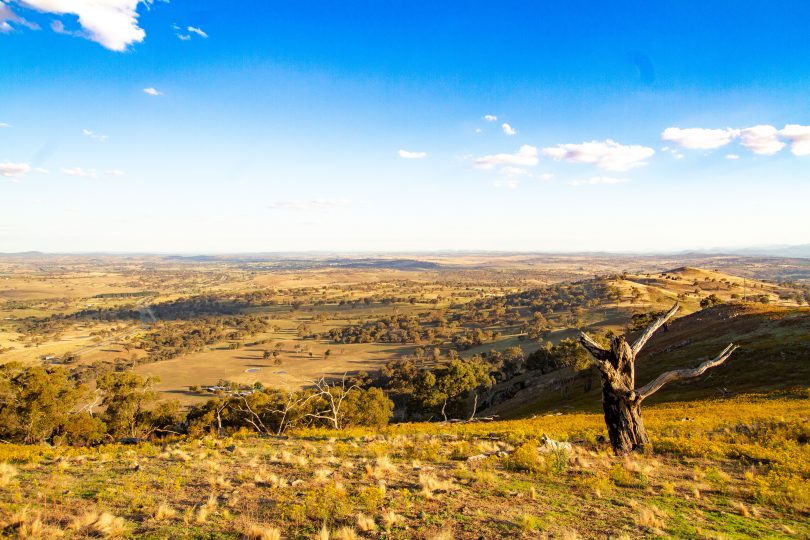 ‘Bowning Hill’ at 79 Common Road is on the market for $900,000 and includes a four-bedroom, two-bathroom home on 60.73 hectares (150 acres) of rolling countryside leading up to the top of Bowning Hill. 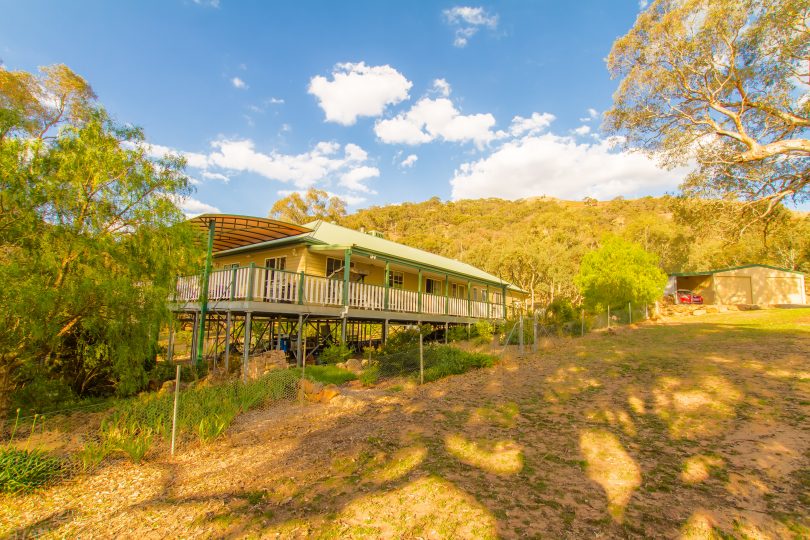 There are also five paddocks, a shearing shed, a two-car lockable garage with power and concrete floor, a one-bay carport, a two-bay machinery shed, water tanks and a large dam. 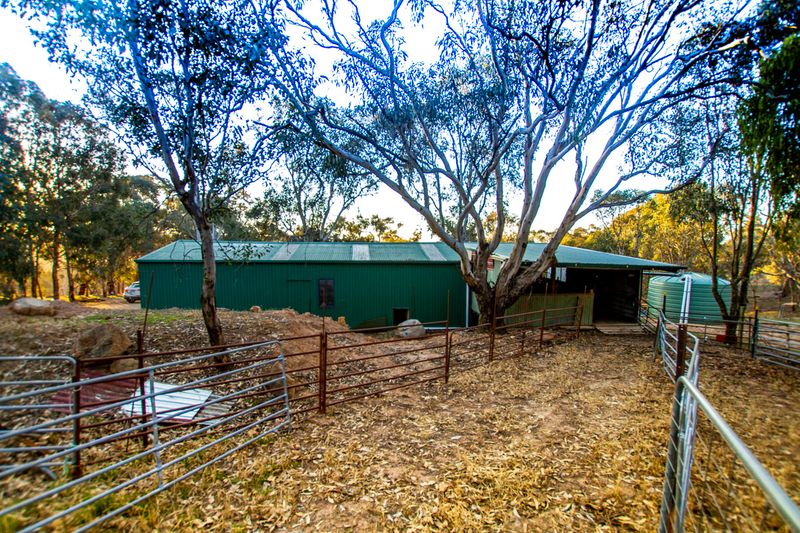 Mr Atkins is selling the property to head off to Germany where he will defend his world title.

“When we first bought the property in 1997, it was just one big block and we’ve created it into a small farm by making five paddocks,” Mr Atkins said. 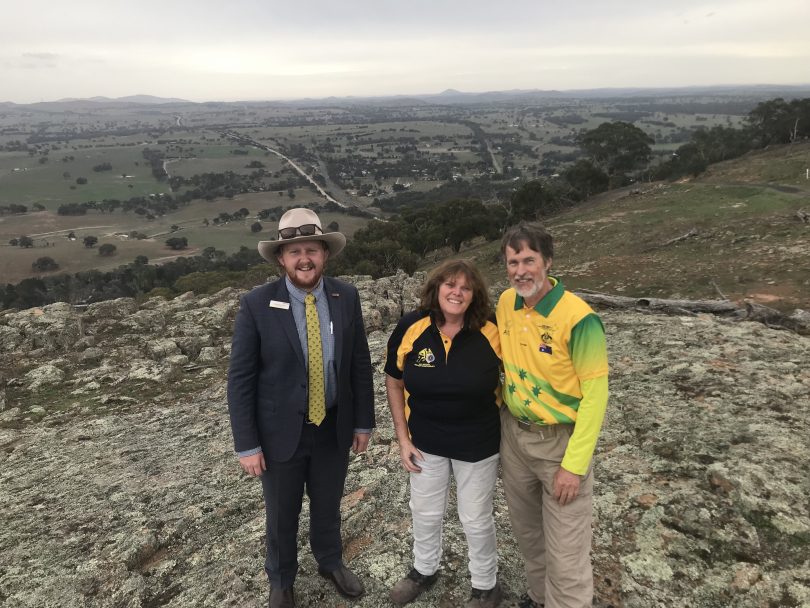 Agent George Southwell with Stuart and Frances Atkins at the property.

“We improved the place with removal of weeds and made it quite accessible for the stock. It also has an abundant wildlife population too.

“We have sugar gliders, wombats, lizards, birdlife, kangaroos, rock wallabies and wedge tail eagles living on the hill, with echidnas in the garden digging their nests.”

Mr Southwell said the likely buyer may be an introductory level farmer or a professional seeking a tree-change weekender. 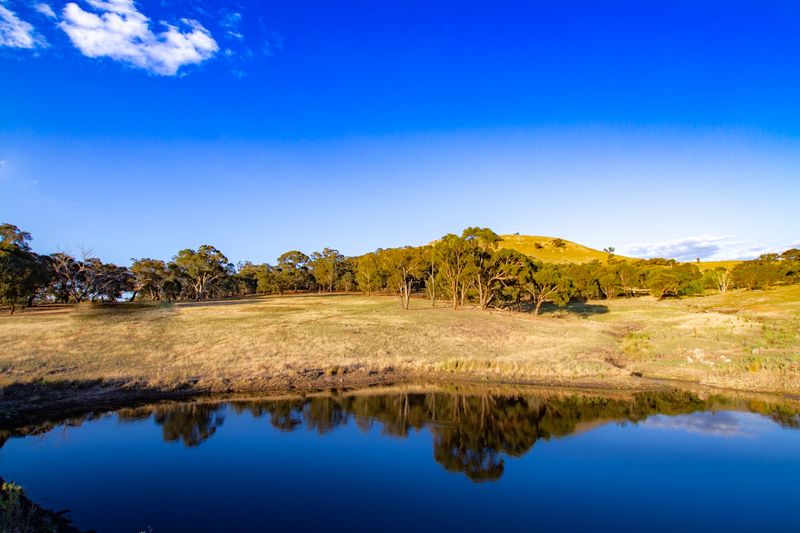 “The Atkins have turned a vacant block into a true small farm and Frances has been leading the charge with fine wool production,” Mr Southwell said.

“Her most recent yield was 16.2 micron, which is an awesome achievement with their smaller line of sheep which are easily managed. 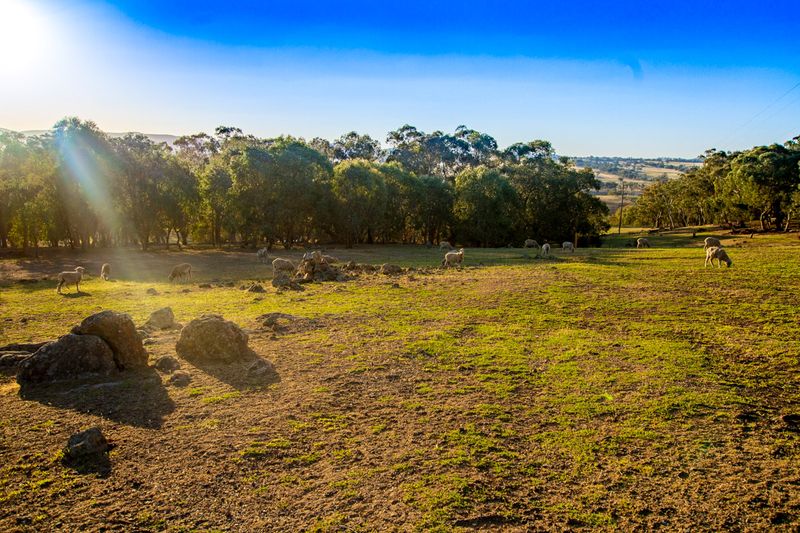 “The property includes a single stand shearing shed with covered room for roughly 100 head, however many uses could be adapted by new owners from an outdoor sports destination, suitable family property or even a great property to retire to.”

The Atkins have hosted an annual ‘Walk the Bowning Hill’ charity fundraiser at their property for the past six years.

“Locals love walking the hill, which has 360-degree views and on a clear day you can see the Black Mountain Tower in Canberra.

“The home is a four-bedroom PAAL kit home; with the highest point of the house being three metres off the ground. We’ve held some great parties on the big covered three-side deck and in the shearing shed. 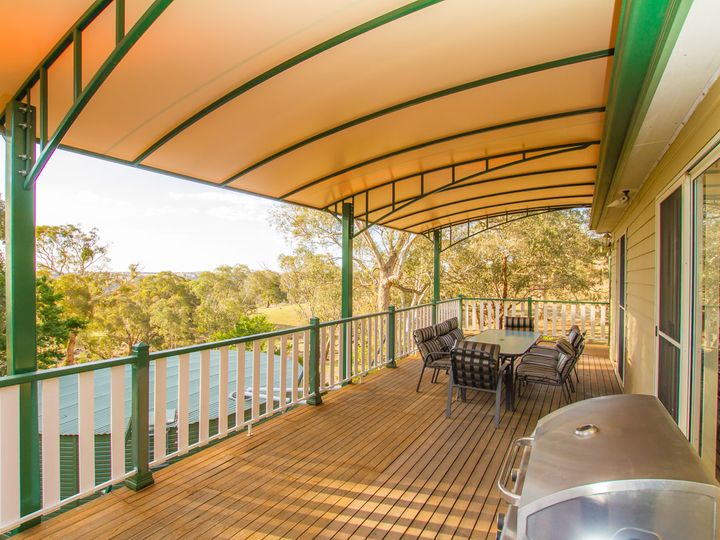 “The gardens are all set up: mostly natives and some fruit trees. We have a beautiful aspect, with stunning views looking down the Murrumbidgee valley and the Brindabellas, but very secluded and serene.

“For winter there’s a beaut wood heater, and during the summer we use the evaporative cooler.”

The floor plan of the home includes a formal dining area which leads into the lounge, a large master bedroom with an ensuite and walk-in robe, and a main bathroom with a spa bath. 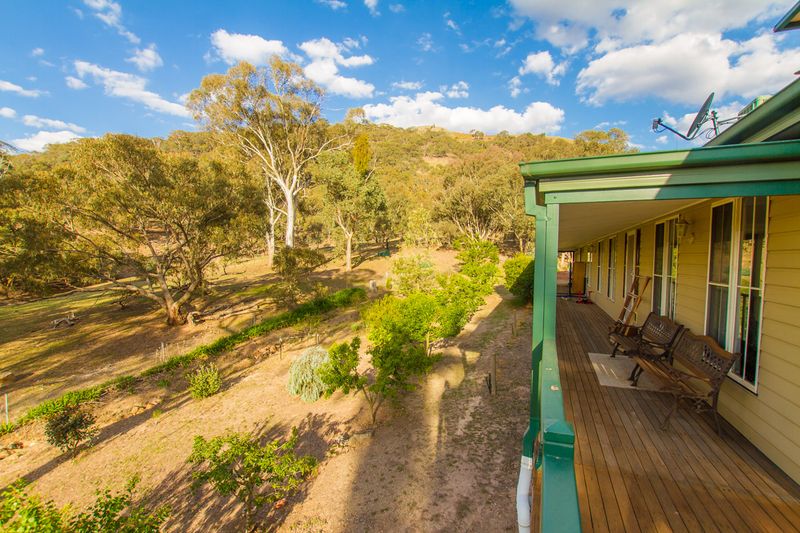 Adjoining the Bowning Hill property is also a 51-acre property named Northside which is in the process of being subdivided off and is also being sold by the Atkins. This property also boasts stunning views and a place to build a new home, with a price tag of $345,000. 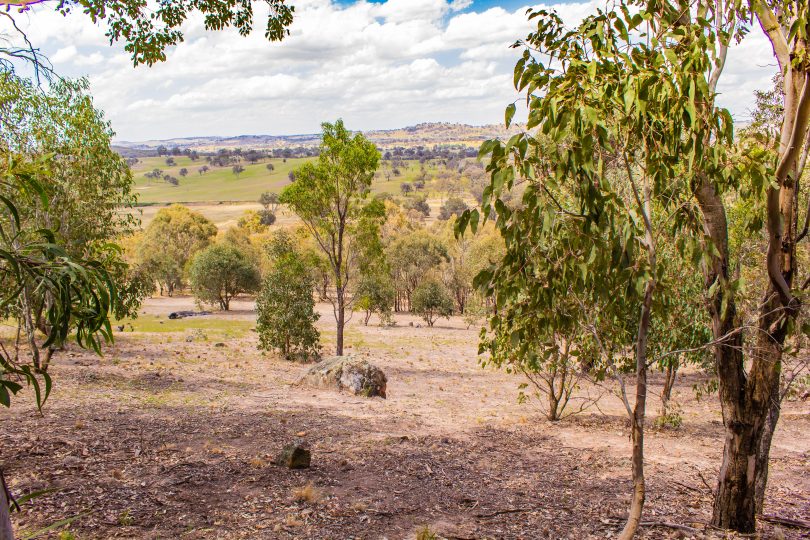 Robyn Holder - 2 hours ago
They were Microbuses in 1973 not Kombis. View
Tijana Delov - 5 hours ago
Slavoljub Zivanovic should have kept your bright yellow one!... View
Maria DeAngelis - 6 hours ago
Antonio Schaivello, interesting read for you 🙂... View
News 2

Chris MacDonald - 2 hours ago
They have to keep him - he’s so good at competing the Chat 10 Christmas special View
Kim Gower - 7 hours ago
Julia Bishop as Chancellor and Brian Schmidt as VC - it doesn’t get much better this! View
News 3

Michele McAskill - 5 hours ago
Great idea. View
Anita Berresford - 7 hours ago
Love the idea. Unfortunately my puppies are not well enough behaved to take them out in public to make use of this 🙄 View
Ludie Popowycz - 7 hours ago
Thank you Icon Water View
Opinion 48

Garry Gordon - 6 hours ago
Tony Tony - you are spot on. In NSW they would sack the Council and put in an administrator. I recall a resident saying in on... View
Garry Gordon - 6 hours ago
Lorraine Welling / and Australia’s worst politicians. View
Tony Tony - 7 hours ago
Wish we could ,,,, sack the A,C.T polies.. sue them for wasting a billion dollars,,, don't U think the community would have b... View
News 75

Alberto Castillo - 6 hours ago
Nobody is prevented from practising lawful religious practices these days. The Bill is designed to wedge progressives. No mor... View
show more show less
*Results are based on activity within last 7 days

Canberra’s ‘Castle Hill’: One of the ACT’s largest farms to be auctioned at Old Parliament House

@The_RiotACT @The_RiotACT
If you like food, wine & Kate Ceberano, there’s never been a better time to head to the hills of #Tumbarumba than 21 & 22 Feb https://t.co/hNKud6i3cZ (4 hours ago)

@The_RiotACT @The_RiotACT
What does it mean when someone says a house has 'good bones'? You'll find a perfect example at 18 Rosenthal Street in Campbell https://t.co/9pN0692HjI (6 hours ago)