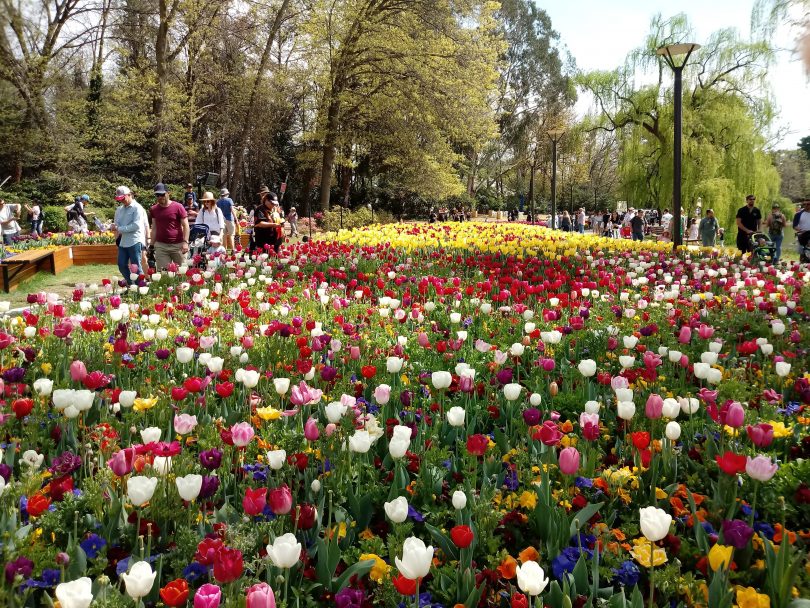 With no Floriade in Commonwealth Park this year, the call is go local, go small, go drive-by. Photo: File.

A re-purposed Floriade this year could include an online design competition for pop-up, roadside displays in suburbs across Canberra, according to the Weston Creek Community Council.

The council has written to Transport and City Services Minister Chris Steel suggesting a range of ideas to salvage Floriade after the annual spring floral festival was canned because of the ongoing COVID-19 restrictions on social gatherings.

The government has suggested that instead of the central celebration in Commonwealth Park, there could be floral displays across Canberra, seeing that more than a million bulbs have already been acquired.

The council says this offers a unique opportunity for community engagement and audience participation.

It says the government could work with community councils and other local stakeholders Canberra-wide to coordinate a four-week online competition in which individuals and groups enter designs that could either be an interpretation of this year’s existing Floriade theme or a new one.

Sites could be identified within districts suitable for small drive-by Floriade pop-ups, at least one per suburb and ideally by the side of roads for easy viewing.

”People can drive by the sites observing social isolation principles if they still apply in September. We could even create a bus route for people to see the flowers if the COVID-19 situation has abated,” the letter from council chair Tom Anderson says.

It says small teams from Events ACT and City Services could deliver the project, assisted by volunteers.

The project would bring a sense of connectedness with community during this difficult time, the council says.

“Council sees this as a unique opportunity for both the Canberra Community and the ACT Government to display leadership nationally in the Tourism and Events forum by repurposing a national event in ever-changing conditions,” Mr Anderson says.

“We also see that this would be a great way to involve everyone while we are ‘Staying At Home’.

”This would certainly bring Floriade and its spirit to the community and brighten, I would hope, our emergence from over five months of self- isolation.”

Mr Anderson told Region Media the design competition would give children stuck at home, in particular, an opportunity to express their creativity.

“I’m sure they would come up with some good ideas that people can’t think of,” Mr Anderson said.

He said the concept fitted with what the government had already suggested, and would take little time to organise.

But Chief Minister Andrew Barr said the government was already moving ahead with its plans and locations for planting throughout Canberra were being finalised.

”Unfortunately the horticulture timeframe means extensive community consultation on the design of flowerbeds is not possible,” Mr barr said.

He said bulbs and annuals would be planted in existing garden beds in and around each town centre, and in portable flower beds, wheelbarrows and smaller pots around Canberra.

”We are now finalising the location suitability and safety assessment, planting plan and schedule. Planting will take place in the final few weeks of April and May,” he said.

”We are lucky to have a dedicated team of gardeners who are looking forward to continuing to work on Floriade this year, despite the impact of COVID-19 on the community.

”Come spring we expect the city to come alive with bright flowers in a wide range of locations so they can be safely enjoyed whilst avoiding crowds and maintaining physical distancing.”

We could mix veggies and herbs in with flowers and have kerbside neighbourhood beds.

They would certainly look better than the “rainbow roundabout” in Braddon.

@the_riotact @The_RiotACT
With work-from-home and workplace flexibility now the norm, businesses are focussed on creating offices that are more homely and enhance staff wellness. Specialist #office space business #Burgtec has some novel solutions https://t.co/I1bnCGMuRp (20 minutes ago)