Call of the Beast: The verdict 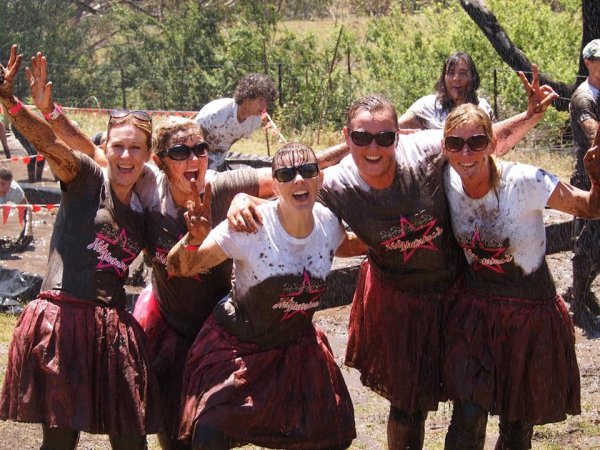 I finished my first Tough Mudder last year and loved it, so when Call of the Beast organisers Dan and Luke generously offered me tickets to this year’s event, held last Saturday 8 November, I was excited to find out how Canberra’s own and original obstacle course race compared.

The verdict: Call of the Beast is the pleasant middle ground between Tough Mudder, a gruelling 20km+ course that includes electrocution, walking through fire and signing a death waiver; and Miss Muddy, a female-only course that’s less than 5km in length and counts foam as an obstacle.

There are several Call of the Beast race options depending on your fitness and whether you want to compete against others. My partner and I chose the 10km Fun Beast option, which wasn’t timed.

On the morning of the event, we’d allowed an extra 45 minutes to park, register, drop our bags and join the 40 or so other participants in our wave at the starting line, but the whole process took only a few minutes. Big tick.

Once we were underway, we climbed over cargo nets, swung from monkey bars, carried sandbags up hills, ran vertically up half pipes and crawled through a lot of mud. My favourite obstacle was climbing over an old mini van covered in carpet, closely followed by abseiling down a small incline using a rope. There were no ice baths, five-metre drops into murky water or underground tunnels half-filled with water. Another tick.

It was obvious that a lot of thought had gone into designing the course, which made the most of the natural terrain, including dried riverbeds, creeks and some very, very unforgiving hills. The obstacles were spread out to minimise long stretches of running and queues at some of the more challenging obstacles too.

Call of the Beast was more casual and less macho than similar obstacle course challenges I’ve completed, which is definitely a positive if you don’t like getting electrocuted for fun and can’t bench press double your own body weight. It’s also a good incentive to bring your kids along for some family friendly fun.

While Call of the Beast was challenging (and I have the bruises and scrapes to prove it!), the 8km and 10km courses are definitely achievable if you have a decent base level of fitness.

Would I do it again? Absolutely. The event was in a beautiful part of the world (Caloola Farm in Naas Valley, just south of Tharwa), less than a 30-minute drive from home and a good excuse to get outside and covered in mud in a relaxed atmosphere.

Well done to organisers Dan and Luke, and to the team of volunteers who helped make everything run smoothly on the day. I know I’m not the only one who’s keen to come back next year.

3 Responses to Call of the Beast: The verdict
Filter
Showing only Website comments

Sounds like a whole lot of fun! Glad to hear the event will be on again next year.

It was great. Maybe you should sign up next year, MBird?

Sounds like a whole lot of fun! Glad to hear the event will be on again next year.

So were there any aspects that were not so good or could be improved upon in the future?

Tom Adam - 54 minutes ago
Why won’t they make it multi storey, instead of stealing parklands?? Not a wise investment.... View
Steve Herczeg - 5 hours ago
I've always wondered why there's a statue to celebrate single mothers at the top of the street. View
Bill Gemmell - 5 hours ago
Ashley Wright no worries. It is a morass to wade through. You made me look again as well. The definition of temporary is the... View
Motoring 14

Julie Macklin - 1 hour ago
You haven't convinced me. But I never said I did this, so that was presumptuous of you. I don't. But because I didn't see any... View
Gregg Heldon - 3 hours ago
Julie Macklin you are still controlling the car whilst it's stationary at the lights. The amount of times you have people dis... View
News 1

Chris Adkins - 6 hours ago
I don't know when I have heard anything so stupid. We are either social distancing or we are not. Solidarity with the Black L... View
News 35

Ian Daun - 6 hours ago
How about replacing the letter boxes that have been removed. View
Adam Meadows - 7 hours ago
Yes, to hell with the homeless. It was only -4 last night, the big girls' blouses. View
Robyn Holder - 18 hours ago
Hey whingers, there is money being spent all over Canberra at the moment. And if it's needed more in older more used places,... View
Community 12

John Brinsmead - 9 hours ago
wonder when we'll see a da for an 8 to 20 story building. View
Theresa Rand - 14 hours ago
Very sorry to read this article... my husband and I do not live in Weston but would make a trip to Weston to visit the booksh... View
Josh Devenny - 17 hours ago
Ada oh noooo 😪😪😪😪😪 View
News 12

Jay Gurney - 19 hours ago
Karley good news View
HiddenDragon - 20 hours ago
"The ACT Government has also flagged further stimulus and support for community and social housing" Good - when Jobkeeper and... View
Sarelle Woodward - 20 hours ago
Is there such a thing in the ACT? View
News 27

Chelle Belle - 24 hours ago
I agree the vacant hospital should be used for addressing low to medium mental health issues. Problem is getting the psychiat... View
News 49

COVID-19 restrictions are easing just enough for some of our favourite Canberra businesses to re-open this weekend, with appropriate social...
Breaking 0

Police have released photos of three young men involved in a dangerous vehicle burnout recently, and are calling for witnesses....
News 3

@The_RiotACT @The_RiotACT
NSW Police have reintroduced stationary breath and drug testing ahead of the Queen's Birthday long weekend, coinciding with eased COVID-19 restrictions for pubs and clubs https://t.co/hxYIRcdkyy (1 hour ago)

@The_RiotACT @The_RiotACT
ACT power bills are on the way down, thanks to the growth in renewable energy driving down the price of wholesale electricity. See what you will save https://t.co/5eDsZoeTpM (2 hours ago)

@The_RiotACT @The_RiotACT
It's #WorldEnvironmentDay and @iconwater is encouraging Canberrans to do their bit by making small changes https://t.co/1OwGcuOhZE (4 hours ago)