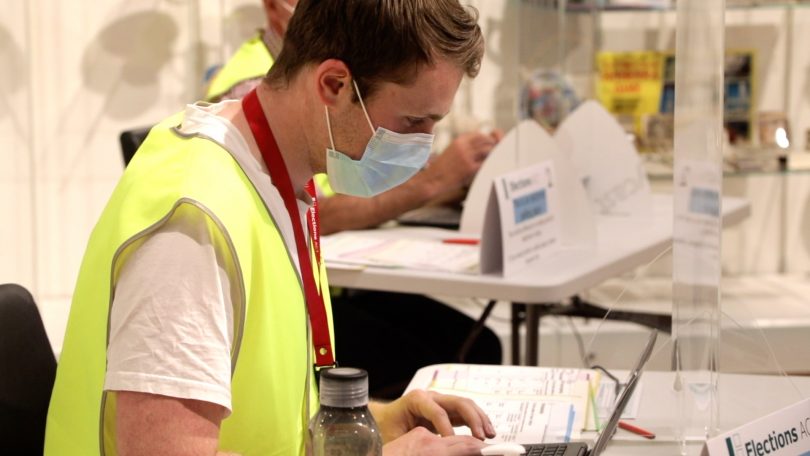 There have been a record number of early votes this year. Photo: Region Media.

On The Campaign Trail today, voters get in early, the Libs’ candidate woes continue, and which leader spent $9500 on Facebook ads?

More people have officially voted early in 2020 than at the last ACT election. ElectionsACT reports more than 87,000 Canberrans cast their ballots by the time booths closed yesterday (8 October).

Almost 92 per cent of votes have been cast electronically, meaning a result could be known within hours of polls closing at 6:00 pm on 17 October.

This year’s early votes eclipse the 83,700 in 2016 and there are still eight days of pre-polling remaining.

More than 20,000 postal ballot applications have also been received, meaning that around 35 per cent of Canberrans either already cast their vote or requested their vote ahead of the election. This is up from around a third of voters in 2016.

ElectionsACT has forecast pre-poll numbers to go above 100,000 tomorrow. An influx of voters in the final week is also anticipated and around 80 per cent of Canberrans are expected to vote ahead of election day.

The total number of votes cast at #ACTvotes early voting centres as at COB yesterday was 87,199.

With 8 days of early voting remaining the figure has now surpassed the total number of early votes cast at the previous ACT election in 2016 pic.twitter.com/ITxQRTmBvd

The Liberals’ candidate for Kurrajong and special advisor to leader Alistair Coe, Robert Johnson, allegedly served as a director of a company with links to the propaganda arm of the Chinese Communist Party (CCP), The Canberra Times reported.

Mr Johnson was appointed to the ACT branch of the Association for the Promotion of Peaceful Reunification of China in 2014, an association described as an organ of the United Front Workers Department by the Australia Strategic Policy Institute.

The role of the UFWD is to advance the strategic interests of the CCP both on the mainland and overseas.

A website post reported that Mr Johnson said he would mobilise more young Chinese to participate in the anti-independence and reunification movement, but the page was taken offline yesterday, according to The Canberra Times.

The Canberra Liberals rejected any links between Mr Johnson and the CCP.

Almost $5 million will be spent on the Tuggeranong foreshore precinct between Reed Street South to the Town Park if Labor is re-elected next week.

The money will be spent on new playgrounds, recreation facilities, green spaces and greater accessibility.

The Conservation Council has given The Greens a gold star – well, 40 of them – in its new environment report card and ranked the Canberra Liberals last for environmental policy.

The Greens consistently scored above Labor in areas such as achieving net-zero emissions by 2030, more cycle paths and incentives for electric cars and bikes.

Despite their promise to plant one million trees over the next decade, the Liberals were given fails for protecting land, cutting ties with fossil fuel companies and no new gas connections.

The Liberals have been criticised for including pot plants in their one million trees policy through its kindergarten vouchers, counting as many as 15,000 thousand small plants for the backyard under the policy.

To view the scorecard, visit the Conservation Council. 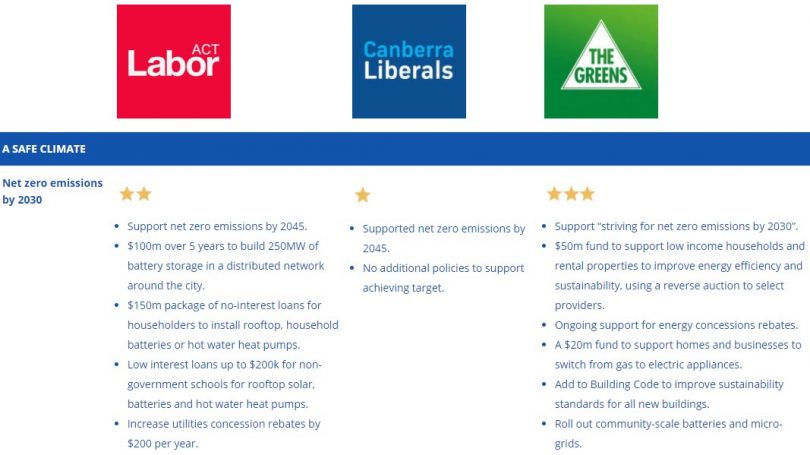 The Canberra Liberals have spent almost $40,000 in the last month on Facebook advertising, compared to $9,200 from Labor and $2,700 from the Greens. 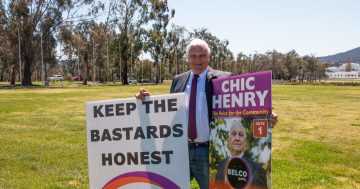