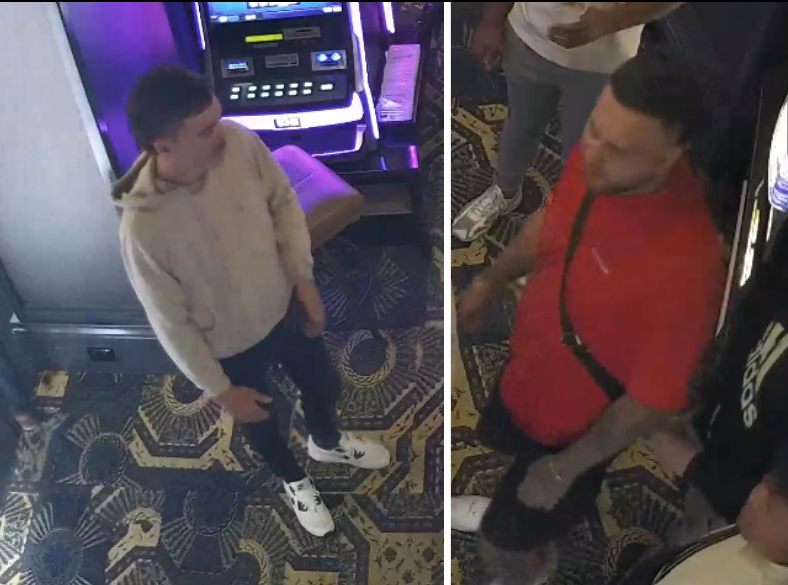 Police would like to identify these men in relation to an assault at the Hellenic Club on Anzac Day. Photo: Supplied.

ACT Policing is seeking the public’s assistance to identify two men involved in a disturbance inside the Hellenic Club in Woden on Anzac Day.

At about 6:55 pm on Sunday, 25 April, three men were involved in an altercation. One man was punched and stomped on.

Following extensive investigations, police have released images of two men they believe may be able to assist with their investigation.

At the time of the incident, one person was wearing a red shirt with black shorts and had sleeve tattoos on his left arm and hand.

The other person was wearing a light coloured jumper with black pants.

If you can identify these men, or have other information about this altercation that could assist police, contact Crime Stoppers on 1800 333 000, or via the Crime Stoppers ACT website. Quote reference 6783973.

2 Responses to Can you identify these men?
Filter
Showing only Website comments

How did they sign into the club? False ids or did no one check?

Bloke on the left is a Muppet, and his mate in red frequents the Munchers most evenings.

Julie Macklin - 52 minutes ago
Alicia Conley The ACT has no cycle paths. They are shared paths. Yes, those around the lake were built with people on bikes i... View
chewy14 - 2 hours ago
"That they are public doesn’t mean there are no rules for using them." Exactly my point. That the rules should preclude cyc... View
Craig James - 2 hours ago
Keep riding your bicycles on the road, Darwinism at it’s finest 🤷🏼‍♂️ View
News 9

Mazzie Woodward - 1 hour ago
We don’t have a working hospital and they are building a giant battery 🔋 does anyone else find this utterly ridiculous? View
HiddenDragon - 5 hours ago
"....will ensure that the nation’s capital remains at the forefront of a booming industry – supporting new jobs in emergi... View
News 21

chewy14 - 1 hour ago
Nobody, Interestingly, one year later, that number is down to 100 under construction or "planned", with another 300 "proposed... View
whatwik - 7 hours ago
There's certainly a nuclear reaction from the usual suspects here any time renewables are mentioned. View
Futureproof - 8 hours ago
Nuclear - the Greens say no New hydro dams - the Greens say no Windfarms in remote areas - Bob Brown says no... View
Community 49

Juanita Tee - 2 hours ago
David Keir what are you specifically doing for them 🙃... View
Liv Miller - 4 hours ago
Rachel Edmondstone love 💓 this View
David Keir - 7 hours ago
Virginia Loizou sounds like you’re the one whinging champ View
Property 28

UPDATED: Can you identify these people?