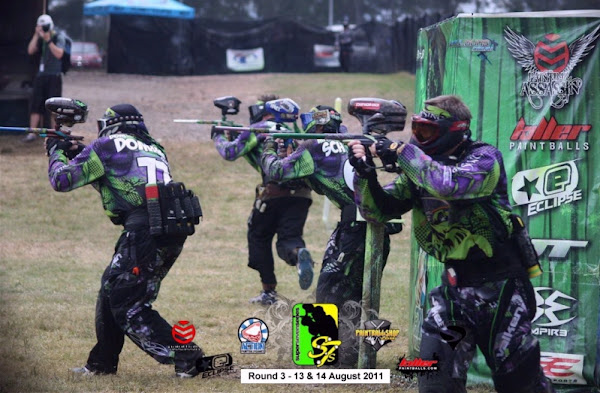 Paintball teams from Canberra will be in Sydney on the weekend of 13 and 14 August competing in round 3 of the Australian Super 7s series.

In the ‘Pro’ division, an injury affected Apocalypse will be attempting to improve on its current series ranking of 5th but will struggle without stalwart back player Aaron Sillis, who is suffering from back injuries sustained in a car accident and with some inexperienced players slotting in to the line up.

Team captain Andrew McElligott said “I’m hoping that our newer players can step up for the occasion and the regular line-up can regain form to take the game to the opposition. We will still have Aaron Sillis coaching us from the pits so we’ll be looking to him to help us take some games off the top teams”.

In the ‘Semi-Pro’ division, Canberra’s Uprising is 2 points off first place but with 3 teams in that 2 point space, this round is critical to any plans for taking the series championship. Uprising’s captain, Mark McElligott, is confident of a strong showing, with the team capable of beating any team it faces.

“We are aware how tight the leader board is but have beaten every team in our division before – we need to come out strongly on Saturday and make sure we’re 5 wins up by the end of the day to be reasonably sure of finishing first or second after Sunday morning’s concluding round games, for a shot at top points for the round and a share of first place on the series ladder and to make it worth the while of our Adelaide based player, Paiden Kosowski coming over! We’ve been training well, working hard on our on-field communication, on making our preliminary bunkers and not losing early bodies, so we’ll see how we can take this in to strong competition”.

The other Canberra team competing in Semi-Pro division, Thundercats, is currently in 4th place on the series ladder but will need to improve to be regarded as any threat to the series leader board.

Canberra is also well represented in the third division, with Uprising B leading the series ladder by 4 points from ACT Notorious in 2nd place and with the all female Divas team in 6th place overall. New Canberra team Death Squad will have a run in 3rd division for the first time.

Uprising B captain Geoff Holder said “Winning Round 2 has really helped give us the confidence to know we can match the stronger Sydney teams and if we can repeat that performance then we have the team to take out the series and look at promotion for next year. There’s quite a few tournament teams starting now in Canberra and in our division it’s now important for us to play well regularly to support our semi-pro team and our sponsors”.

All matches are being played at Action Paintball games tournament fields at Rouse Hill in Sydney. Round matches start at 8.00am Saturday and Sunday with finals expected to be played from mid-day Sunday.

good stuff – anything local coming up?

Corunna Farm at Corunna is one of those rare properties which represents a generational opportunity for a landmark holding on the...
Property 21