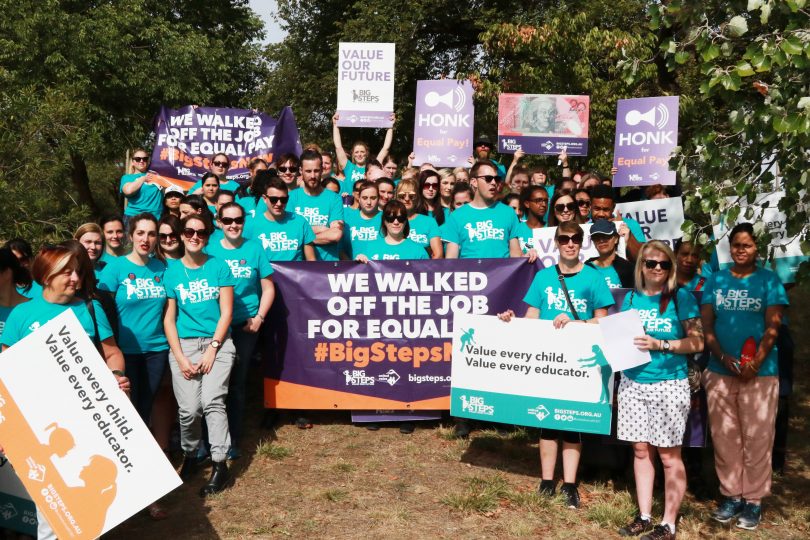 More than 150 Canberra early childhood educators will walk off the job tomorrow afternoon to protest at “appalling levels of pay” which are as low as $21 an hour.

A number of Canberra childcare services are expected to close early when the protesters leave work at 3.20 pm tomorrow (Thursday) and assemble near Commonwealth Avenue Bridge for a ‘Honk-A-Thon’ – where drivers are encouraged to honk in support of their bid for equal pay.

Other childcare centres will take part in the protest by holding supporting events in their centres.

The Canberra workers are participating in a national protest organised by the union United Voice which is billed to be “the biggest early education walk off in Australian history”.

It will be the second ‘walk off’ this year as part of the campaign for professional pay for early childhood educators.

“They are fed up with government policies that do not address the fundamental issue of low wages.

“They are highly a skilled and dedicated group, the vast majority of whom are women, who just can’t put up with poverty wages any longer,” Ms Ryan said.

“This Thursday ACT educators are taking further action to demand that the government address this issue.

“Parents accessing early education services are amongst their greatest supporters knowing as they do the amazing work that is performed each day in services across Canberra.”

Ms Ryan said that the educators and supporters will assemble near Commonwealth Avenue Bridge around 3.45 pm.

“They will encourage drivers to honk to support equal pay for early childhood educators,” she said.

“Everyone is invited to join the educators on the bridge and we certainly want plenty of passing traffic to honk their support.” 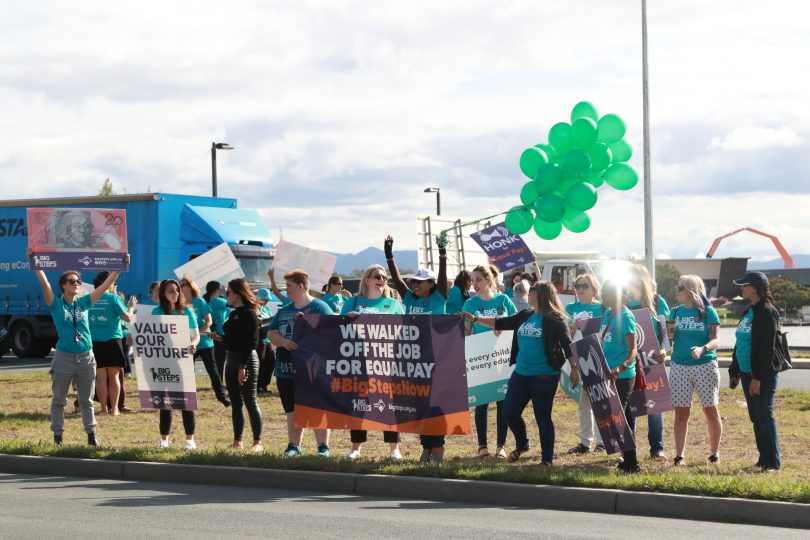 “As long as the government continues to ignore them and pass the buck on funding equal pay, from here on in they will continue to escalate their action,” Ms Gibbons said.

“It is outrageous that in 2017 female-dominated industries are still fighting to receive equal pay. This needs to be a national priority.”

Ms Gibbons said the early childhood educators are walking off the job at 3.20 pm “as it represents the time of day that educators effectively start working for free because of low wages”.

Do you think early childhood educators should be better paid? Should their pay rates better reflect the importance of their work? Let us know your thoughts in the comments below.

I do think early childhood educators should be paid better. I currently have children in childcare in the ACT and recently moved them from a for profit big-name chain to a non-for-profit that employs higher qualified staff and pays them more. My experience has been the educators who are paid more and work under better employment conditions are more engaged and provide a much better level of care. My children are much happier at the non-for-profit, they are learning more and they are better cared for. The staff don’t leave them too long in wet nappies, they take more care with dietary requirements. My kids also get sick now less often than they did at the for profit centre.

Plain and simple people who don’t value early childhood educators don’t value the kids they are looking after.

It’s hard to believe they are serious with all those smiling, happy faces. It was the same impression conveyed on TV last night with many waving to passing cars. They had a lot of printed corflute placards and signs too; they don’t come cheap so I guess the union was digging deep for them.

Actually they are child minders or babysitters but “childhood educators” sounds better when you have a barrow to push. Part of the reason for the pay rates is that it is a comparatively recent industry. 50 years ago it didn’t exist & babysitting was done by grandparents, neighbours & friends.

I had 3 kids in childcare & found that there was little relationship between the qualifications of the workers & the quality of the care given.