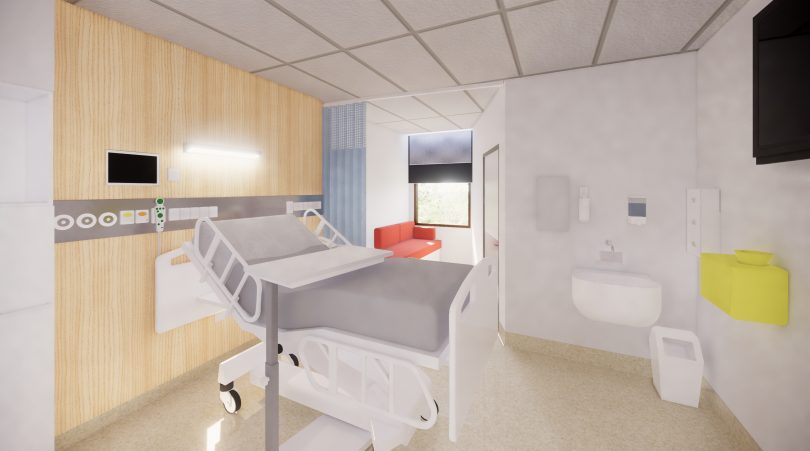 An artist’s impression of a room in a refurbished cancer ward at Canberra Hospital. Image: Supplied.

The redevelopment of wards 14A and 14B in Building 3 will mean cancer and haematology inpatients receive treatment in completely refurbished surroundings within 18 months, with Ward 14A scheduled for completion in the second half of 2019, and Ward 14B in the first half of 2020.

“There will be more single bedrooms to support patient privacy, infection control and recovery, and daybeds in patient rooms to enable family members to be more involved,” Mr Mooney said.

“The redevelopment will also feature positive pressure environments to reduce the risk of infection to immune-suppressed patients. These rooms are designed so that air flows out rather than in, keeping airborne bacteria away.”

Upgrades to the Clinical Trials Service area will allow it to add the testing of new drugs to its existing program of intervention testing.

“These changes will allow us to build on the exceptional care our staff provide to inpatients of the two units by providing a more comfortable environment for them and for those who support them,” Ms O’Neill said.

She said that steps would be taken to minimise disruption and discomfort for patients, friends and families during construction.

Preliminary sketch plans were finalised in August 2018 and demolition of Ward 14A was completed in October 2018. Construction of the new-look ward 14A will begin shortly, and Ward 14B will be decommissioned once 14A is re-opened to patients, with the second phase of construction due to get under way in October 2019.

The redevelopment will be connected to the neighbouring Canberra Region Cancer Centre (CRCC) by a new walkway extending the central corridor. Design features within the ward refurbishment will be consistent with the appearance of the CRCC, which opened in 2014. A new plant room will supply essential building services.

A tender process was held in late 2018 for completion of the design and to undertake the rebuild. The tender was awarded to national fitout and refurbishment contractor Shape Australia, which is in the process of establishing a site office and will soon begin engaging user groups on the finer points of the project, from design to furnishings.

Lets hope they make all the rooms single if the majority are and they gear all their services to patients with support people.
Unlike postnatal where there is one double room but they treat all patients like they are in single rooms

phydeaux - 28 minutes ago
"Penalising “poorer” [sic] people less, is an incentive for them, and a serious grievance to others" So sorry to hear tha... View
kenbehrens - 31 minutes ago
Difficult question. I've often thought that fines are inequitable with those on higher incomes not adversely impacted. Yet th... View
domenic - 2 hours ago
Penalising people differently based on their ability to either do well for themselves or not is a socialist ideology that I d... View
News 4

bj_ACT - 50 minutes ago
Tuggeranong’s water quality has not been getting better. I didn’t know you were such an easy marker on the score of ACT g... View
chewy14 - 2 hours ago
BJ, The problem is that short of getting rid of the Lake entirely, there is no easy (or cheap) solution. Most of the problems... View
Mikey Moore - 3 hours ago
Turning an artificial pollution trap into a clean waterway with actual amenity is a huge ask with countless unknowns. It was... View
News 1

“If you sit next to someone who is dying, you get a different view”: family-friendly cancer ward opened at TCH