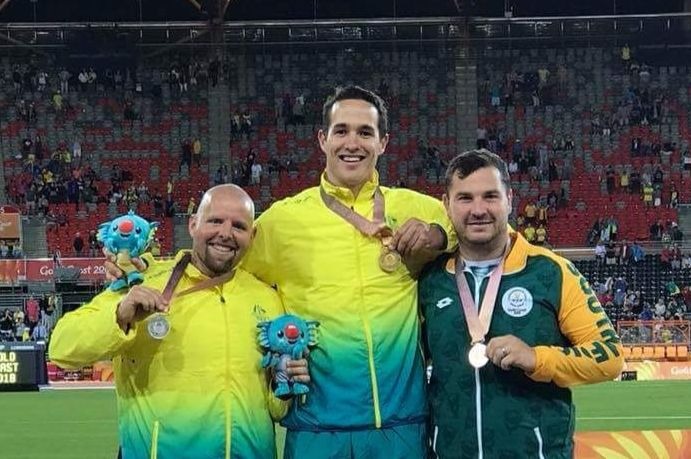 The Canberra sales agent made light work of the eight-man field, with his throw of 15.74m well clear of countryman and silver medallist Marty Jackson’s throw of 13.74m.

Javelin wasn’t included as one of six para-athletics events at this year’s Commonwealth games, so Sawyer turned his attention to shot put last year.

Crombie entered his first Commonwealth Games as the overwhelming favourite to bring home the gold and he did not disappoint the parochial home crowd.

“It won’t sink in for a while yet, it could be a few weeks or months. I haven’t had much sleep and I’ve only eaten once since 3 pm yesterday,” he said.

“My event was so late and by the time I finished with doping control it was midnight, so it was a late night.”

“Right now my body is recovering but what an experience! It’s one that I will never forget.”

The 32-year old, who suffered a stroke when he was a kid, began his para-sports career in rowing. He later moved to track and field and the decision proved to be a successful one as he became a world champion in shot put. 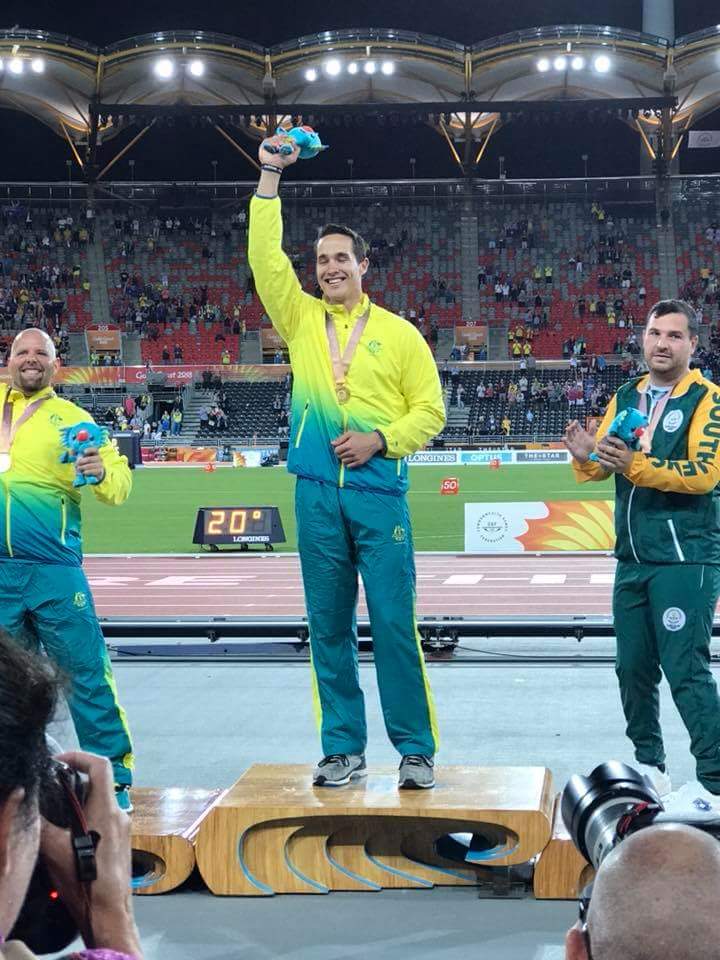 Crombie thanked his team at Ray White Canberra for supporting him and his 25 hours of training each week.

“I had a stroke as a kid when I was born and that took out some motor function on the left side of my body, so it doesn’t quite function as the right side,” Crombie said.

“My twin brother is fine and he was there to watch last night. He might be better looking than me but he doesn’t have a gold medal now does he?”

The Gold Coast Commonwealth Games is being applauded for its integrated para-sport program, giving athletes a chance to compete against others around the world.

“There are actually some guys who have been throwing shot put since 1988 and been to nine straight Paralympics and World Championships but never had an opportunity to go to Commonwealth Games because their particular category has never come up,” he said.

“So to have a para event at all is the first big stepping stone and then to have an event that you are the current world record holder is like a stroke of luck.”

By day, the star athlete is a sales agent at Ray White Canberra, selling residential homes in the capital.

Crombie thanked his team at Ray White Canberra for supporting him and his 25 hours of training each week.

“Ray White Canberra are focused on the right areas and that is why I decided to work for them,” he said, who has been an agent for five years.

“The support from Ray White has been amazing and I couldn’t hope for a more supportive and enjoyable place to work.”

Between his career in real estate and elite sport, Crombie still finds time to be heavily involved as a volunteer firefighter with the ACT Rural Fire Service and a committee member of the Ginninderra Athletics Club.

The world record-holder now has his sights set on the Tokyo Paralympics in 2020.

Ashley Wright - 23 minutes ago
Jennie Smith vast majority of the tram works were done in the median strip of flemmington road with minimal impact. There was... View
Property 3

Robert Hawes - 2 hours ago
Should be done via the nurse walk-in centres. View
Lyn Christie - 7 hours ago
Ian E Wheeler maybe somewhere you can register if you don't see community nurse and are unable to get out to receive the shot... View
Tom Porter - 9 hours ago
Maybe the carer can arrange for the community nurse. It is not prohibitive. Then again the government could contract Aspen to... View
News 21

Andrew Dale - 7 hours ago
Rory Bourke I'm both mate 🥸🥴 View
Lucas Anasdow - 9 hours ago
The Left are pushing to have the Event Renamed as the Term 'Black' is deemed to offensive and upsetting for segments of the C... View
Rory Bourke - 9 hours ago
These days they don’t call it old, they call it experienced. View
News 3