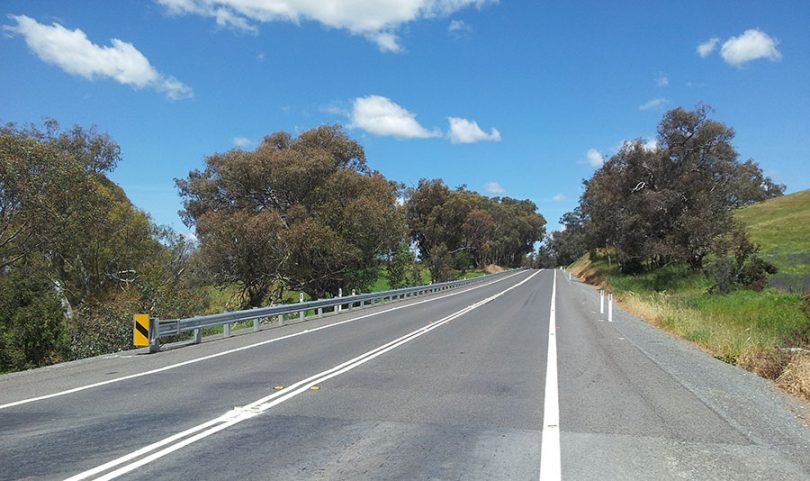 The driver who died after a head-on crash on a “dangerous” road near Tumut on Sunday morning has been revealed as a 67-year-old man from Canberra.

NSW Police said the 67-year-old Aranda man, who was driving a Toyota RAV4, died at the scene while his passenger, a 48-year-old Dickson man, was taken to Canberra Hospital in a serious condition.

The driver of the second vehicle was taken to Wagga Wagga Hospital with non-life-threatening injuries.

NSW Police said an investigation into the cause of the crash was ongoing.

Gocup Road is a 31-kilometre two-lane rural road from the Snowy Mountains Highway at Tumut to the Hume Highway at Gundagai, and has a high rate of accidents on its narrow lanes.

In 2012, the NSW Government committed $70 million over five years to upgrade Gocup Road, largely focusing on widening and strengthening the road.

He labelled the road as “dangerous” due to increased traffic and said that the upgraded road works were “overdue.”

“The traffic flow over the last seven or eight years has really increased and there are more logging trucks using that road which makes it quite dangerous,” Mr McAlister said.

“The upgrades are really overdue and desperately needed, so it is unfortunate there has been another fatality.

“Where they are working now, they will put in overtaking lanes which will make a huge difference in traffic flow but there are still accidents on the road and it is due to the high volume of traffic and hopefully the improvements they are currently working on will accommodate that increase.

“It is a road that you still need to take it steady and it is still very narrow in places because with its terrain in the hills, they can’t make the roads too wide, but it is a great relief to see work being done.”

A $3 million project began in January to resurface and widen 5.1 kilometres of the road between Yarra and Smarts roads.

It is of significant concern that it seems as many ACT residents have died in motor vehicle crashes over the border in NSW as have died in the ACT. While being tough on those close, is there any work being done on the causes? What do we know about serious injury rates?

Craig Sutton - 20 minutes ago
Kathie Nash Yeah thanks scoop 🙄 I was referring to the entire northern part of Australia. Cairns, Townsville, Darwin etc... View
Sharon Cabban - 31 minutes ago
Lani Metcalfe future for Jack View
Kathie Nash - 1 hour ago
Canberra will never get its own AFL team while we only have a 'stadium' that holds 13,000 at maximum. Need a bigger stadium t... View
News 31

Ashley Hillstead - 40 minutes ago
That being said it looks like losing a prop won’t take their drones out so I guess they just hack it and repair any damage View
Ashley Hillstead - 42 minutes ago
Dean Okeeffe anyone who’s ever used drones even recreationally knows birds go for them too, there are hundreds of videos on... View
Food & Wine 15

Julie Macklin - 43 minutes ago
Peter Hatfield Not faster if the bus gets stuck in peak hour traffic in Sydney, as has happened to me. I used to catch the bu... View
Peter Hatfield - 1 hour ago
Or just go to the Jollimont and catch a comfortable coach and be in Sydney an hour faster, and at a fraction of the real cost... View
Greg Myat - 4 hours ago
Ross McConchie I agree with you entirely about using rail more to get trucks off our main routes. But trains are the most eff... View
Property 13

Kacey Butterworth - 45 minutes ago
Tim, let’s move. View
Jodie Kerec - 2 hours ago
Lisa Van Schieveen we could live here together. View
Gabrielle Driver - 3 hours ago
Lauren Edney look how nice it is. I'd have the cottage View
Sport 7