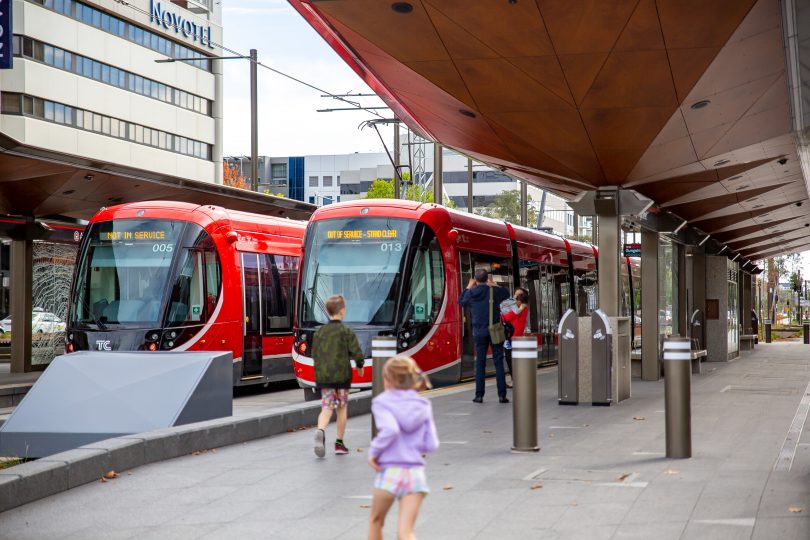 Almost 100 infringements have been issued for fare evasion since 1 October. Photo: File.

Canberra Metro staff have issued 386 infringements to passengers for fare evasion since light rail commenced, with nearly a fourth of those infringements handed out this month.

Fare evasion infringements have been issued to 306 adults and 80 kids since the light rail took its first passengers in April, but Transport Canberra said fare evasion is still very low. A spokesperson said the vast majority of light rail customers travel with a valid ticket, with just 0.12 per cent of total tickets checked actually incurring a fine.

This month has seen an increase in the number of people pinged for boarding the LRV with an incorrect fare paid or no ticket at all; a total of 94 infringements have been issued for fare evasion since 1 October, to 80 adults and 14 kids. But Transport Canberra said it only represents a very small proportion, only 0.2 per cent, of total tickets checked during the period.

A Transport Canberra spokesperson said 16 customer service officers are responsible for checking that light rail customers are travelling with a valid ticket. Police or staff may request a passenger to produce a valid ticket or MyWay card for inspection including applicable concessionary entitlement.

The spokesperson said the officers do not target particular times of the day or particular stops.

“The first priority for our customer service officers is always the safety and security of our customers travelling on the light rail, while also supporting customers in using the system and providing an exceptional customer experience,” the spokesperson said.

“Ticket checking is conducted randomly across the light rail’s hours of operation, and across the 13 stops along the route.”

Earlier this year, Canberra Metro apologised to a 16-year-old girl after staff threatened to fine the teenager for not carrying ID while on a light rail vehicle.

I tapped my card and the customer service officer or more like a dictator of tram checked it and said I did not tap it...they machine could not read it..and they insist I did not tap it properly..she was so rude telling me how not intelligent I was for not tapping...she the the old lady at night.....she was just insisting that I did not tap properly...how proper you put your card...i put it on the machine and ping...it was a big drama..she just act like she was a police....gosh...really..

As they say, "build it and they will come up with means to evade paying its fares"

About half of the participants? Just asking😎

People should be publicly flogged for this crime😎

No issues with the light rail however the idea that so much money and resources are being poured into light rail while absolutely nothing is being done to reverse the damage to public transport in Canberra by the new bus network is mind boggling! Have we forgotten the whole purpose of public transport??

So they managed to get there infringements working perfectly to see who’s avoiding paying for there trip. But still can’t get it to work for a month straight without something not working right ?? Makes sense good job Canberra

I do have to give a shout out for one of the TC fellows that was checking people’s fares late last Saturday night. He was so very merry and cheerful and polite to everyone that you just couldn’t be annoyed at him for the inconvenience of needing to drag out your cards to show him.

I almost got fined on the weekend. I have a my-way card with plenty of credit on it, but it has been a while since I caught the bus. I swiped my card and oh, my card no longer works! What the hell?!! Apparently your card now lapses after a certain period and you have to buy a new one.

So I had to buy another card in the city, pay an extra 5 bucks for the new card, and now have to chase up with TC to get the credit from the old card transferred to the new one. In the meantime, I had to pay $5 to get the tram from Dickson into Civic, where on my card it would have cost something like $2.60.

Rebecca Norris..I'm sure you overhear this being disucssed at length at work...

That’s an annual wages bill of at lease $1 million so what is the point in doing it (apart from soliciting another 16 Labor voters).

A mate of mine got fined for not travelling with her student ID while using a student my way card in her school uniform. A bit dodgy I reckon

That's one way to pay off the toy train set.

Interesting that there are 16 officers checking tram tickets yet the government can’t manage enough drivers to run a full weekend timetable for our buses. Train them as bus drivers please.

What a joke, You gonna use those fines to pay bus drivers? Telling everyone you just dont have the staff cause you laid them off is pretty garbage.

I wonder how many of those infringements were due to a myway card running out of balance. It maybe better if you could still tag on and off if your card is in arrears but running out of money on the card then generates a text or email with a link that allows for mobile recharge of the card within 72 hrs. I for one would like more data about why people are evading fares before we all jump in to create more complicated fine structures. The Admin costs of means tested fines would be huge....

Rob Thomas - 2 hours ago
you wish to retire somewhere no one wishes to live? well good luck with finding services there. View
What's On 10

Leanne Kerri Pascoe - 2 hours ago
It should be legal when you are unable to care for your self. View
jorie1 - 11 hours ago
Well said Chewy14. Certain people cannot just change the Constitution because they feel like it or think it will work better... View
JS9 - 12 hours ago
You have no idea whether the majority want it or not at this point in time. That statement may have held in the late 80's/ear... View
Community 9

Karen K Holliday - 4 hours ago
Lucy Long it will be sad to see it go but I’m excited for a new bridge. View
Steve Tsiamis - 7 hours ago
John Bosch I lock myself at home on these weekends. A short walk for a fish down at Cullendulla. View
John Bosch - 7 hours ago
Yep. Hopefully the traffic won't be backed up half way to Mogo like it was yesterday afternoon. View
Food & Wine 111

Maya123 - 4 hours ago
That's how I felt when I used to rent. I could only afford very cheap rent. I put on extra clothing in winter and would rathe... View
jorie1 - 4 hours ago
Rates and land tax are huge amounts of money. The ACT government only cares about making money. On my small property (it's an... View
bj_ACT - 5 hours ago
My niece is the second person I’ve had recently complain that they have ended their long term cheap lease due to required p... View
Community 2

Shane L.J. Ryan - 10 hours ago
Dorothy Tangney was the first woman elected to the Australian Senate in 1942. Dorothy Tangney Place in Parkes, ACT is named i... View
Lifestyle 3

Lauren Nihill - 11 hours ago
We are all so proud of you Kirrah! View
News 4

keek - 11 hours ago
They are an introduced pest and should not be roaming wild in any case. View
News 76

JS9 - 12 hours ago
Very true JC - as you say a lot of information is given away voluntarily, and with pretty much every phone having GPS in it t... View
JS9 - 12 hours ago
So you turn up to cafes and sit down for a lunch with people who you don't even know their names then CR? Surely across a gro... View
show more show less
*Results are based on activity within last 7 days

For more than 20 years, Rodney Plumb has quietly enjoyed one of the best views in the Eurobodalla, if not...
What's On 10

It's a big week in Canberra, but if you're missing the Canberra Show, hit the highway for a day trip...
*Results are based on activity within last 7 days

Many Canberra renters are suffering through heat waves and cold snaps or paying through the nose to heat and cool...
News 28

The developer of the problem-plagued Gungahlin pool has been absolved of liability for building defects, including if further damage or...
Food & Wine 18

Did it start when you hauled those buckets out during a recent storm? Did you hear shaking sounds overhead that...
Opinion 15

@The_RiotACT @The_RiotACT
Hot in the City: Lilotang in Barton’s Realm Precinct has a revamped interior, a new menu & 70+ varieties of whisky https://t.co/9eDFsw4aQp (40 minutes ago)

@The_RiotACT @The_RiotACT
Kambri's student-led exhibition pairs artists with academics from across ANU to provide a unique take on the knowledge & research of the uni https://t.co/YPf4UU0xNF (2 hours ago)

@The_RiotACT @The_RiotACT
A group of Canberra teenagers have been filmed racially harassing Dickson cafe staff. But owner Vincent Wong says he wants the incident to promote education, not hatred https://t.co/w2FheRpXhz (3 hours ago)