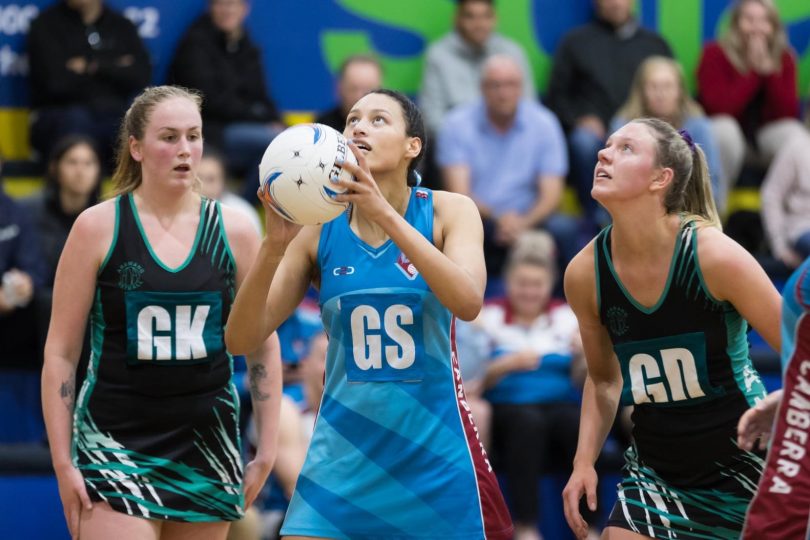 From the beginning of her netballing journey, Nalani Makunde’s natural talent was there for everyone to see.

This was only in 2015, when Nalani, who at the time was a keen basketballer, tried netball at a school carnival.

“I was a kid who would sign up for any sport as a way of getting a day off school,” she says with a laugh.

“Through that, I somehow ended up with one of my friends – who was on my basketball team at the time – who said to me, ‘You should come train for a bit to see if you like it.'”

It wasn’t long before Nalani asked to try out for the ACT state team, eventually making it and fast-tracking her development.

On Friday, 3 December, Nalani was crowned Most Valuable Player (MVP) for Netball ACT’s premier competition, the HCF State League. Playing at goal-shooter for Canberra Netball Association, she shot an incredible 446 goals in only 10 games this season, at an accuracy of 91 per cent.

Nalani says the recognition is a “nice consolation prize” for not getting to finish the season due to the ACT’s COVID-19 lockdown.

Canberra Netball Association missed out on the opportunity to push for a three-peat of HCF State League titles because of the abrupt conclusion to the competition when COVID-19 lockdown came into effect.

As for who she has to thank, Nalani says it is a never-ending list.

“I’ve had so many coaches and all of them have had an influence on me,” she says. “Tara [Steel] has been my State League coach since 2016 so obviously I owe a lot to her.

“She’s so fantastic and she won the coaching award last year. That really speaks to how good she is, but also [she is valued] as a person.

“I think this year and last year being involved in the Capital Spirit space [has also been valuable], which is our team that plays in NSW. Kate Carpenter is the coach of that team and she’s been great for me, too.”

In 2022, Nalani is looking forward to a return to the Australian Netball Championships after the competition didn’t go ahead in 2020 or 2021. She will also be pushing for a three-peat of titles for the Canberra Netball team.

“We’ve been really lucky to have the past few years that we’ve had,” she says.

“We were on track to defend our back-to-back so hopefully just continuing with that as a club. I think we’re really lucky; we have a lot of depth and some great players moving up so we just need to keep on building and improve on our performances each week.”

“We’re not quite equipped for Super Netball yet,” she says.

“It’d be a dream of mine though. I’d love to see a team pop up in Canberra eventually. I’m a big believer in the ‘build it and they will come’ mentality.

“I think we’re next on the list. I’ve seen Tassie is interested in a team coming up in the next few years so hopefully we see it one day, but I think right now just continuing to build on the state league competition is what they’re looking at, and pathways, which I think has improved a lot in the time I’ve been there.”