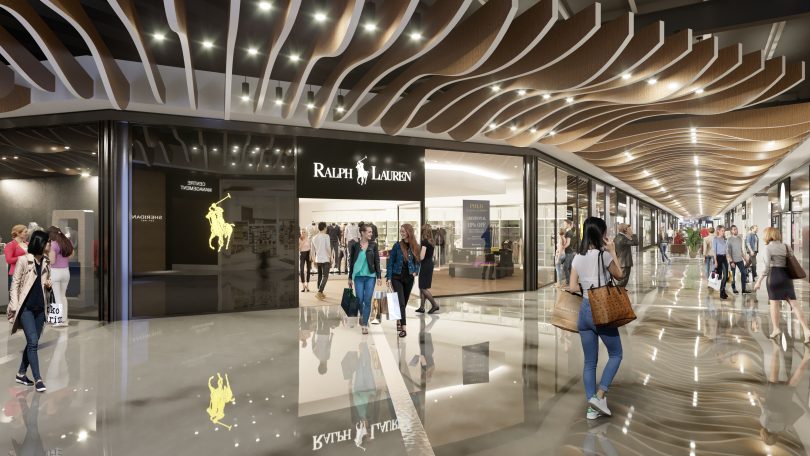 An artist’s impression of the Premium Mall. Image: Supplied.

A steady rise in international visitors to the Canberra Outlet Centre in Fyshwick has prompted a major upgrade and bigger offering of premium brands.

One of the biggest outlet stores of its kind in Australia, the centre has announced it will be undergoing development in preparation for the opening of a premium mall. Work is underway and will be completed later this year.

RetPro Managing Director Graham Terry said: “Our leasing team has been working with a range of international premium retailers and can confirm that major retail brands Ralph Lauren, Tommy Hilfiger and Calvin Klein will be opening flagship stores as part of stage one of the Premium Mall.

“The addition of these international brands will see a new calibre of premium shopping currently not available in the ACT, offering international visitors the opportunity to shop luxury, high-end brands they’re accustomed to in other national cities in Australia.”

The Premium Mall will feature high-end finishes including architecturally designed floor and ceiling treatments offering an elevated shopping experience. The Premium Mall will be located in the west side of the centre near Harris Scarfe, towards Lindt and leading towards the food court.

International visitation has increased by more than nine per cent in 2018, with the contributing factors including the international flights to the capital, Mr Terry says.

The outlet story has come full circle, to some extent, because the Fyshwick site in Canberra Avenue was the subject of an intense auction battle by the owner of Canberra Airport, Terry Snow, and a previous owner of the outlet centre, and winning bidder.

Mr Terry says the Centre has continued to evolve since opening in 2008 and this premium mall is the next stage of that evolution.

In 2017 the centre was acquired by Deka Immobilien Investment GmbH as part of their global real estate portfolio. Since the acquisition, they have been instrumental in bringing the only supermarket to the Fyshwick population with the opening of Supergrocer in 2018 and is now looking to further enhance the centre with the new luxury development.

“The centre has been on quite a journey since RetPro began management in 2013, with more to come as it looks to the next stage of the centre lifestyle, as it continues to evolve into a destination for home and fashion,” Mr Terry says.

The centre boasts a range of international and national brands including Nike, Under Armour, MacPac, Freedom, TK Maxx, Cue, Sheridan, Adairs and more.

Opening daily from 10 am to 6 pm, the Centre is the only Outlet Centre in the ACT.

“It is an exciting time for the centre, as we continue to focus on enhancing customer experience and offering something unique to the market,” Mr Terry says.

“The Centre will continue to remain an outlet centre, and to now extend our offering to include more premium sort after brands,” Mr Terry says.

“The brands will join the likes of other international brands Nike, Adidas and TK Maxx that are favourite for both local and international visitors to the centre.”

Ray Ez - 8 minutes ago
It’s like they never saw it coming! Again! And again….and again… View
Linda Stapleton - 4 hours ago
Oh the poor souls mowed near our home only a couple of weeks ago and oh dear the grass is now two feet high already. I feel s... View
Sport 5

Discounts on discounts at the Canberra Outlet Boxing Day sale

@The_RiotACT @The_RiotACT
Sally Hopman reckons there's no need to #write yourself off if you are struggling with #computers. Just pick up the heaviest thing handy - ancient Remington #typewriters are always good - and take aim at the laptop https://t.co/5SoyRLLAhU (9 minutes ago)