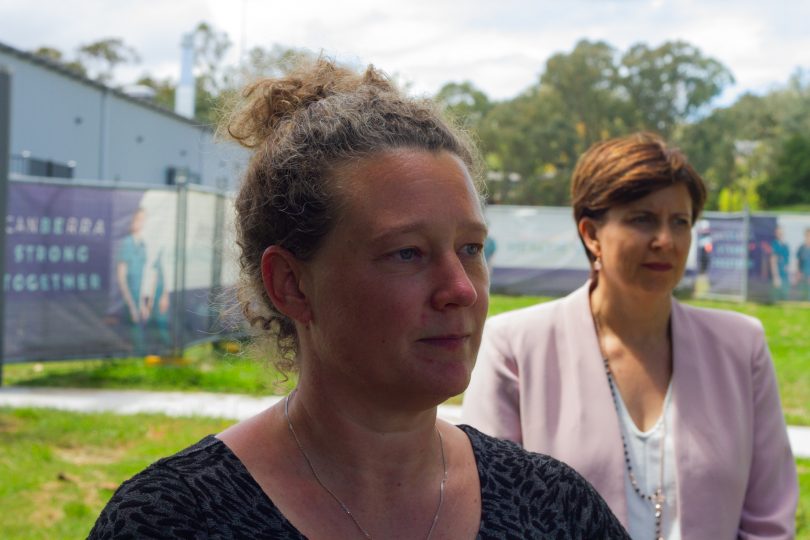 AstraZeneca is the second company to have its vaccine given the green light in Australia after the Pfizer vaccine was approved last month.

The AstraZeneca vaccine does not require the same stringent storage requirements as the Pfizer vaccine, making it is easier to distribute, especially in rural and regional Australia.

Around 1 million doses of the AstraZeneca jab will be rolled out each week from the end of March, Federal Health Minister Greg Hunt said.

Chief Health Officer Dr Kerryn Coleman said the exact number of doses that will be allocated to the ACT is unknown.

“We will have to look to the Commonwealth for more updates [on its distribution],” she said.

The first phase of Australia’s vaccination campaign will target frontline and health workers, including hotel quarantine staff and border force personnel. This amounts to around 4000 in the ACT who will all be vaccinated over a month-long period starting from next Monday (22 February).

The Garran surge centre opposite the Canberra Hospital will become the ACT’s first vaccination centre due to the storage requirements of the Pfizer vaccine but more vaccination locations will eventually become available across Canberra, Dr Coleman said.

“We have plans in place to be able to step up [distribution], including at Calvary [Hospital], and then potentially from some walk-in centres,” she said.

“There are many GP practices that are interested [in administering the vaccine].”

Some community pharmacies may also be able to administer the vaccine down the track, she said.

This is likely to commence when the AstraZeneca vaccine has begun rolling out across Australia as it can be stored like most other vaccines, meaning it will be more accessible to doctor’s surgeries and pharmacies.

Anyone who will administer the vaccine will have to undergo some training despite the administration of the COVID-19 vaccine being like any other jab, Dr Coleman said.

“These people who are vaccinating know how to do this already so it is about [learning] the specifics of the vaccine,” she said.

Any Australian who wants to be vaccinated will be able to receive the jab by the end of the year, Dr Coleman said.

@the_riotact @The_RiotACT
With work-from-home and workplace flexibility now the norm, businesses are focussed on creating offices that are more homely and enhance staff wellness. Specialist #office space business #Burgtec has some novel solutions https://t.co/I1bnCGMuRp (9 minutes ago)