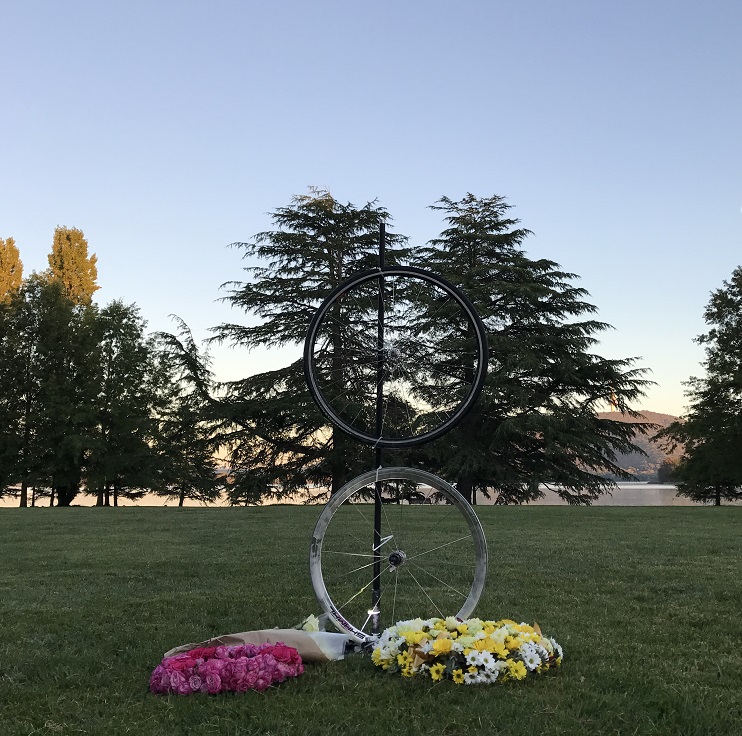 Yesterday morning at 6.22am a group of grieving Canberrans held a minute of silence for a member of the international cycling community who died on an ACT road exactly one week before.

Mike Hall was participating in the Indian Pacific Wheel Race, cycling from Fremantle to Sydney, when he was hit and killed by a car on the Monaro Highway, south of Canberra on Friday 31 March. He died at 6.22am at the scene of the accident.

One week later at Nara Park on the shores of Lake Burley Griffin, hundreds of people from the ACT community came together to pay tribute to Mike Hall. There were cyclists and dot watchers, people who knew Mike Hall and people who had never met him. Most of the Canberrans who were there to pay their respects knew Mike Hall best as a dot on a computer screen, moving from left to right across the map of Australia.

“I know to you he was a hero, but to me, he was just my baby,” said Mike Hall’s mother in a message read by British Deputy High Commissioner Ingrid Southward at the remembrance event. “He would not have liked all of this fuss, because all he was doing was ‘his thing’. The thing he enjoyed the most was riding his bike.”

“He represents in his tragic death something we all feel very acutely, and that is our vulnerability on the roads,” said Stephen Hodge of the Cycling Promotion Fund.

We like to think of ourselves as a bike-friendly place, so what happened last Friday morning made a lot of people step back and consider just what riding on Australian roads means now – to us and to the rest of the world.

“It really is a reminder of how even the most experienced person is vulnerable on a bike,” said Jane Seaborn of cycling safety organisation the Amy Gillett Foundation.

“Nobody goes out to inflict harm on anybody when they hop in their car or on their bike. We recognise that there is a driver out there that is also grieving as a result of this tragedy,” said Pedal Power ACT’s John Armstrong.

“The importance of sharing the road, leaving sufficient space when overtaking and obeying the road rules cannot be stressed enough.”

“Everybody should expect the right to get home safely, irrespective of which mode of transport they choose.”

Mike Hall’s partner sent a statement to the gathering from Britian:

“The best tribute we can pay to Mike is to ride our bikes as often as possible, be respectful and responsible on the road and strive for the day when our roads are safe places for everyone to share.”

Sean Kinmonth - 2 hours ago
Peter Mackay do tell were your information for self driving cars being implemented before the trams are paid off comes from?... View
Maddison Farrawell - 3 hours ago
https://youtu.be/17cxH9p-xps View
Sharon Fuller - 4 hours ago
He would the idiot View
News 46

Lance Hallström - 2 hours ago
Lyndon Ogrady did your house evaporate when you settled? If an investor bought it then it's still for rent. If a renter bough... View
John Hynes - 2 hours ago
Gee, the Labor Party getting commercial policy wrong? Never!... View
Christina Carroll - 3 hours ago
Good more renters might be able to afford to buy now. View
Opinion 24

Amy Jones - 8 hours ago
Britt Shephard shall we attend for a few ciders?? 👍🤷‍♀️ View
Community 19

Bente Hart - 8 hours ago
Susan Nicholls 1kg sugar to 2L water heat gently until sugar is dissolved. Cool down. Poor into shallow tray with straw or th... View
Capital Retro - 14 hours ago
There are definitely more bees than flowers in my garden this season. I think the urban situation will improve but it's prett... View
Susan Nicholls - 15 hours ago
Bente Hart How do you make sugar water? View
Community 39

Caul Fer - 10 hours ago
Tarian Dixon no View
Shannon Lister - 15 hours ago
Michelle Brown your famous. View
Annabel Dobson - 15 hours ago
That’s simply not true. You can see very clearly the damage Brumbies are causing when you ride through KNP. We know scienti... View
Business 6

Malcolmo Oz - 15 hours ago
Trudy Jane Even worse Jane (and Betty) - many have never even come here!! View
Trudy Jane - 24 hours ago
Betty Starbux most people who criticise Canberra have never even lived there View
show more show less
*Results are based on activity within last 7 days

Saturday marked the 17th anniversary of the 2003 bushfires – events that are still seared into the memory of every...
News 46

@The_RiotACT @The_RiotACT
Register for #NightShift - a free & up-late program of talks, music & art-making at @NatGalleryAus, and you’ll be in the running to win a free double pass to the Matisse & Picasso exhibition https://t.co/YAi2P3e2Rv (1 hour ago)

@The_RiotACT @The_RiotACT
Canberra’s recent string of bushfire fundraisers continues this week, and you can find all the details in our latest #GigGuide https://t.co/8TXIEJ5DOu (2 hours ago)

@The_RiotACT @The_RiotACT
RT @AHCPhoto: Massive blaze at Pialligo this afternoon. Less than 20mins from my place. January has truly been a test for #Canberra #bush… (2 hours ago)