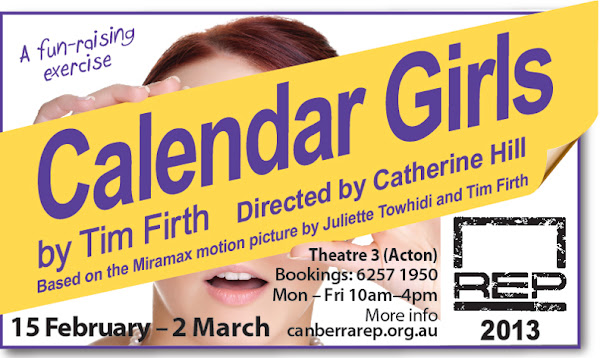 This in from Canberra Rep:

The first production for Rep’s 2013 season is Tim Firth’s Calendar Girls. Opening on 15 February, the production continues until 2 March at Theatre 3,
3 Repertory Lane Acton. Directed by Catherine Hill the play is based on the Miramax motion picture by Juliette Towhidi and Tim Firth.

Based on a true story, Calendar Girls is the story of how two enterprising women persuade their friends from the local chapter of the Women’s Institute to take part in a fundraising calendar with a very saucy difference. When everything is revealed, can their friendship survive the pressures of sudden fame?

This is Hill’s third directorial role with Rep, with her last production being Elizabeth Cameron’s It’s My Party, and I’ll Die if I Want To in 2008.

The cast of this production with the support of REP and Stroudgate publishers are producing a commemorative 2013 calendar. All proceeds will be shared between the Leukaemia Foundation of Australia and the Monaro Committee for Cancer Research (MCCR). These will be available for purchase from opening night.
A Comedy

Lyn Scougall - 36 seconds ago
Margo Bellis you told us that, that’s why we went there 👍 View
Margo Bellis - 22 minutes ago
Lyn....it was far better than Floriade View
Ali McNally - 2 hours ago
Nadine Pickersgill next year! View
Community 7

Grahame Barnett - 10 minutes ago
We "bribe" our magpie gang. We feed them. They don't attack their feeders. View
Karen De Britt - 11 minutes ago
Feed her mealworms, she'll come around 😁 View
News 33

Tramcar Trev - 17 minutes ago
$162million for about 1km of light rail does seem excessive. why do they insist on laying the track inn concrete where the tr... View
Sally Greenaway - 18 minutes ago
Steve Manns but that can't be right. It's too expensive even for our rates... View
Steve Manns - 56 minutes ago
Sally Greenaway no. None. Not a cent comes from private investors. No ones going to invest in that. If you want to know where... View
News 28

whatwik - 22 minutes ago
Ha, try NSW regional travel. Disappointing yes, but prudent. Some of us do wonder about the obsession with the ACT Chief Mini... View
chewy14 - 2 hours ago
JC, No spin here, just facts. Whatwik claims that others have had to backtrack on their plans. Except none of the other state... View
News 8

Clive John Trenton - 35 minutes ago
Come on people. It was replaced for a very good reason! As an old bridge it was likely costing a fortune to maintain due to i... View
Mitch Carrington - 1 hour ago
Was fun riding over this for some reason Mark Humphrey Wheeler View
Greg Grant - 1 hour ago
About time! View
Community 25

Capital Retro - 38 minutes ago
The Australia Post vans deliver mail to them early in the day so that the postie bike person can use them as a suburban pick... View
News 244

Nanna Lola Apted - 40 minutes ago
Who will look after them and keep them tidy. Who will prune them back when they overhang the roads and block drivers vision. View
Geoff Jones - 1 hour ago
Money could be spent maintaining public spaces and mowing. View
Opinion 31

rspg - 48 minutes ago
Bureaucracy at its worst with no concept of real world realities. When Manuka oval and st Christopher’s can’t be accessed... View
News 25