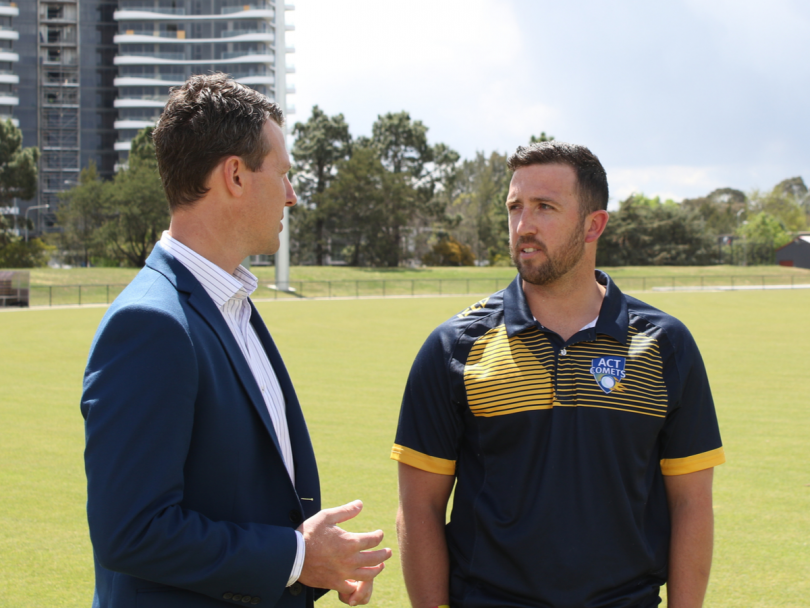 The players will join co-captains Peter Siddle and Dan Christian for the T20 match under lights at Manuka Oval on Thursday, 24 October at 7:10 pm.

Much to Cricket ACT’s delight, Canberra local, Djali Bloomfield, has received a well-earned call-up for the match.

The first local player to play in the PM’s XI in four years, Bloomfield is a proud Indigenous Australian and right-arm fast bowler. He took 11 wickets at 15.63 with an economy rate of 7.8 in last year’s 2nd XI T20 competition for the Comets, proving himself to be a successful T20 bowler.

“Canberra has a proud history of local players competing and performing admirably in the PM’s game over the years,” Mr Allsopp said.

“This match has catapulted the careers of Behrendorff, Carters, Dean and Haddin in recent times but if we wind back the clock a little further, past performances in this match from local players – Cade Brown, Darryle Macdonald and Greg Irvine for example – have become legendary and are now a part of cricket folklore in the territory and greater region. I am thrilled that Cricket Australia and the PM’s office have recognised this and provided Djali with the opportunity to create his own slice of history around our traditional match.”

Bloomfield has been playing with the ACT/NSW Country Comets over the last two seasons. Coach Kyle Piper has witnessed Bloomfield’s growth and he agrees with Allsopp that this selection is well deserved.

“His pride and passion in his performances and in his community are hallmarks of his character. His ability to compete is a key strength and I am sure he will demonstrate this during the fixture.”

Australian One Day, T20 International representative and Brisbane Heat captain Chris Lynn was also added to this year’s team. One of Australia’s most explosive white ball cricketers, Lynn shapes as a major drawcard for the fixture. His career record of 4,425 runs in T20 cricket at a strike rate of a phenomenal 141.96 confirms his status as one of the best players the T20 format has ever seen.

Joining Lynn in the top order is NSW and Sydney Thunder batsman Jason Sangha. Fresh from a breakout 2018-19 season, Sangha will look to build his case for higher honours with a strong performance against Sri Lanka. Sangha also has roots in Canberra, currently playing with the ACT/NSW Country Comets at a state level.

Australian One Day and T20 International representative and new Perth Scorchers signing Fawad Ahmed has been selected as the senior spin bowler in the side. Ahmed’s inspiring story is well known, immigrating to Australia from his native Pakistan, obtaining citizenship and going on to play for his country, win multiple domestic titles with Victoria and claim more than 200 first-class wickets.

Joining Ahmed to form a potent leg-spin duo is Daniel Fallins. Hailing from the Sutherland Shire, situated within Prime Minister Morrison’s electorate of Cook, Fallins recently forced his way back into the NSW Blues’ Marsh One-Day Cup side and plays for Sutherland Cricket Club in NSW Premier Cricket.

Commenting on the selections, CA National Talent & Pathway Manager Graham Manou drew attention to the “excellent blend of experience and youth among this group”.

“We anticipate that emerging players such as Djali Bloomfield, Daniel Fallins and Jason Sangha will take great benefit from appearing alongside the likes of Chris Lynn and Fawad Ahmed. We are confident these players will produce an exciting brand of cricket while remaining true to the traditions and values of the Prime Minister’s XI under Peter Siddle and Dan Christian’s leadership,” Mr Manou said.

“We look forward to announcing the remaining members of the squad and the coach shortly.”

The Prime Minister’s XI will play Sri Lanka at Manuka Oval on 24 October at 7:10 pm.

Tickets are available at www.cricket.com.au/tickets.