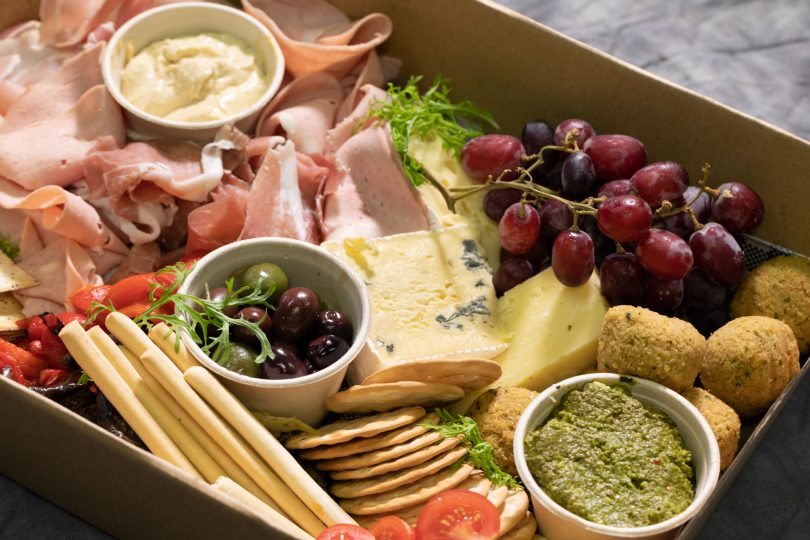 It is a known fact that everything is nicer when you’re hungry. It’s why parents say no to chocolate and biscuits before dinner, because they know that Brussel sprouts are on the way and Brussel sprouts need all the help they can get.

This is not the time to try out new food and then provide a balanced, considered review of it.

The Canberra Southern Cross Club launched a new catering service last month and are delivering some of the products to the Region Media office at 11:30 am on a Friday for us to try. We’re all holding out for it, with increasingly noisy stomachs as the time approaches.

Well, it arrived dead on time. An instant five stars for that.

I am the high-flying CEO of a business, and my Italian suit and I have just taken a break for lunch after a morning of very important meetings. At least, that’s the image I’m getting in my head when I see the three large boxes on the table for the first time, classily packaged with dark green and gold graphics.

The first box is packed with three different types of rolls – 15 in total. The first is a prawn cocktail with crisp iceberg lettuce; the second, smoked beef with seeded mustard, pickle, mayo and gem lettuce; and the third, roasted chicken with baby spinach and brie. 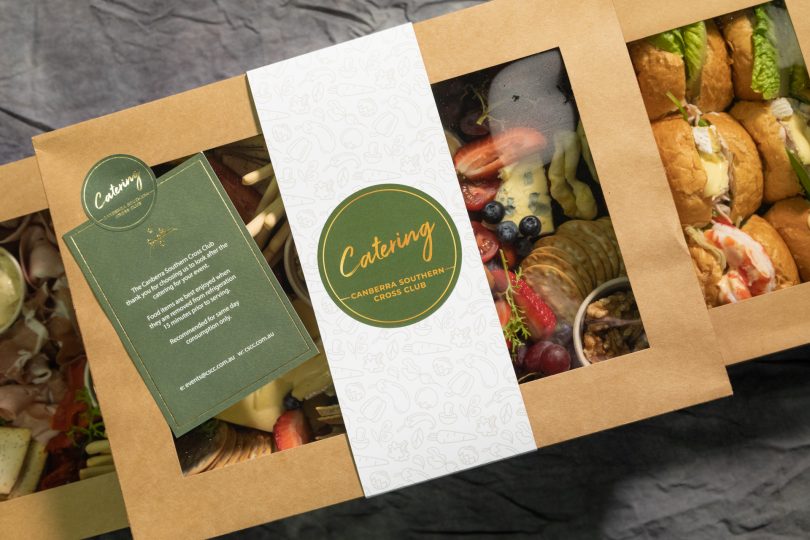 The other two boxes make up cheese platters – ‘Australian Cheese’ and ‘Artisan Antipasto’ – just as generously stuffed and so beautifully arranged you nearly don’t want to touch it (but we did).

General Manager for Food and Beverage Anurag Gautam looks after everything that appears on the menus at the Southern Cross Clubs. He says that for the catering boxes, they looked at what people wanted and it wasn’t overly complicated food.

“Our customers want simple things, as well as fresh, and wherever possible, local produce.”

A large mouthful in and it’s immediately apparent that they’ve nailed the brief. It is exceptionally fresh, and not exotic for the sake of it.

Catering was a product offering born out of adversity. Like every other hospitality venue in the ACT, all the Southern Cross Club venues at Woden, Tuggeranong, Jamison and the Yacht Club were closed for business over lockdown. Only the fish and chip shop, Snapper on the Lake, continued ticking along on the back of takeaway. 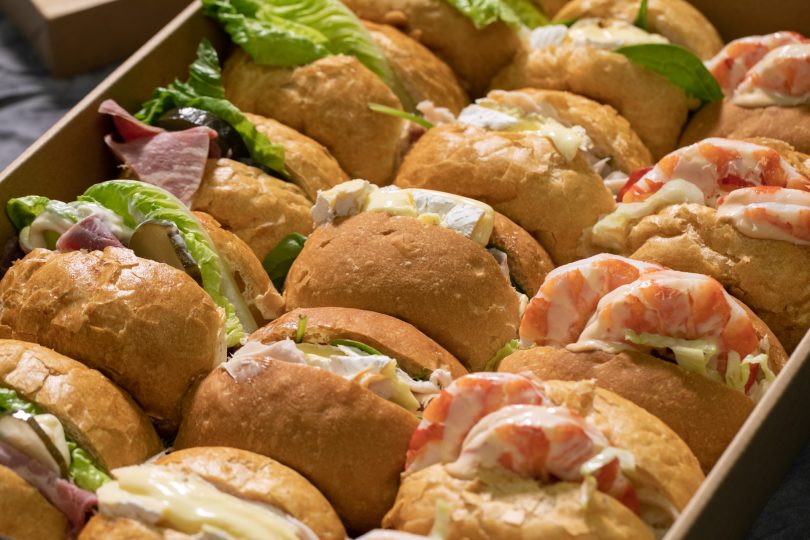 Demand for prepared picnics and grazing boxes soared over lockdown, and the Southern Cross Club wasn’t one to let the opportunity go to waste. The idea of catering boxes first came up during the first lockdown in 2020 as a plan to widen their audience.

It was initially meant to launch on 1 September 2021, but then COVID decided to revisit the ACT in late August, and it was put on the backburner until 1 November. It’s only been on offer for a few days, but Anurag says the signs are already encouraging.

“People are looking. People are used to living at home and eating things in their pyjamas. Now we’re just continuing that. The food comes to you, rather than you having to go to the food.”

Their average customer is a mixed bag, from businesses to the proverbial mums and dads who have a few friends coming over. The Southern Cross Club also provided catering for the closing event of the MensLink walk, which was mightily appreciated by the walkers who’d just finished a 145 km trek around the ACT.

All three boxes are said to serve 15 people and are $150 each. This works out at about $10 a head. Given what’s inside the boxes, it’s hard to fathom how it could be done for less. 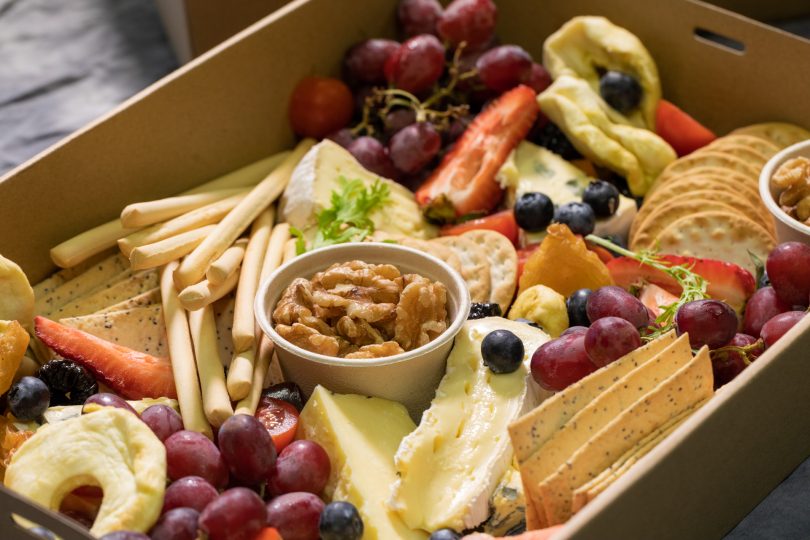 “Imagine trying to do a platter like this for 15 people,” Anurag says.

“You end up spending $200 buying the individual stuff and then having to arrange it, so it all looks good. This way, you don’t have to worry.”

At the moment, pick up is limited to the Woden club, but plans are afoot to wheel it out to other Southern Cross venues. Delivery is also available for $25 on weekdays, $40 on Saturdays, and $50 on Sundays and public holidays.

Anurag says they’ve kept it all very simple, but they intend to build on it.

“We’re looking to see if there’s a demand for fully-fledged catering services. Basically, event organisers would call us and we would look after everything, from the food to the setting up of the venue.”

At Region, we grazed throughout the afternoon, and for some lucky family members there were leftovers, and similar high praise … and it’s hard to get a more comprehensive review than that.

Trudy Anais McInnis - 8 minutes ago
I hated Triple J in the 90s and I love it now. Thank goodness it’s changed! And millions of votes led to The Wiggles coming... View
Monty Ki - 3 hours ago
Onelia Herriot that's my husband, for sure. View
Onelia Herriot - 4 hours ago
Kathleen Beck the band's choose who they cover. The station has no say. There has even been cases of the same song covered by... View
News 237

Tāmati Kentwell - 14 minutes ago
Hugh Gregory most income based schemes like this take into account number of dependents View
Jimbo Lambert - 31 minutes ago
If the reduction is about safety, shouldn't they install a warning speed check at the start of the 40 zone to warn drivers th... View
Jimbo Lambert - 32 minutes ago
Justo Justo I haven't been fined, as I now avoid going that way. In fact I didn't even know the limit had been reduced until... View
Food & Wine 20

TheSilver - 5 hours ago
I posted references here: https://the-riotact.com/getting-omicron-has-been-way-worse-than-i-expected/527040/comment-page-2#co... View
phydeaux - 6 hours ago
I doubt the present value of the QR system compared with its original use, although I am extremely confident it never did hav... View
phydeaux - 6 hours ago
TheSilver, I recall you have previously been asked for the references for those studies but I do not recall seeing a response... View
News 1

Ann Gugler - 6 hours ago
I met Alan many years ago and hopefully I have copies of all his books, but I will keep an eye out for others just in case I... View
Opinion 7

May Welland - 9 hours ago
There were so many drones flying past my house that I decided to count them. In 4 days this week, i have had 63 drones fly pa... View
Community 42