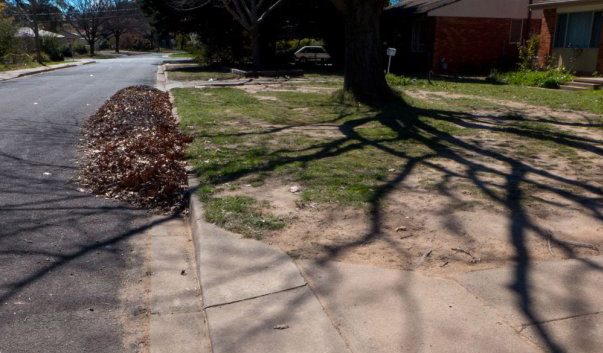 It was not that long ago that winter in Canberra meant that the air was filled with smoke.

These grey blankets across the capital were in part made up of the smoke from the very popular wood-fired heaters used within many Canberra homes. Other additions to the annual smoking events were backyard fires lit to burn off the rubbish and lawn cuttings as well as the ritual large backyard barbecues fires – fired up using wood and any other rubbish to hand. A couple of decades ago Canberrans (mostly blokes) were proud of their raging fires.

While more recent arrivals may not appreciate it, a very significant absence today from life within the inner suburbs is the long-standing ritual of burning off winter leaves along the street gutters. It was not uncommon during winter for households to be smothered in the smoke from the curb-side smouldering mounds of leaves. This was serious stuff. At times it was very difficult for drivers to see down the street due to the heavy walls of smoke engulfing the whole area.

It was also not unusual for temperature inversions to occur brought about by the warm smoke filled air being trapped by cold air above. Flights would be cancelled and sometimes these inversions would last all day.

Surprisingly these whole annual smoking events were seen as normal. It was very unusual to hear anyone complain about these rituals as it was just part of life in winter in Canberra.

I could imagine that many academic hours were spent researching the causes of the smog despite this being very obvious to the observant. 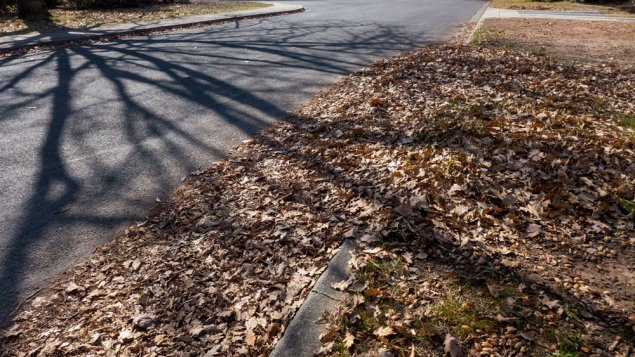 Today many in the inner suburbs still rake their leaves into the street awaiting someone to come along and clear them away.

As I wander these streets enjoying the many clear blue sky days and step over the piles of leaves stacked over the curbs, I am reminded of the former Canberra annual smoking rituals.

How things have changed!

I drove all over Canberra every day for years in the 60s/70s and never saw anyone burning leaves in the gutter.Most people had more sense and used them for mulch.Driving in from Queanbeyan at that time the temperature inversions were obvious but most homes had oil heating.

I too have lots of large oak trees where I live, but most of the leaves don’t hang about my block, because of wind patterns. They end up in the garden opposite. My plan was to leave them where they fell as mulch, but they blow away. I don’t need to rake, or even think of burning them.
I still have an inside wood stove. It’s my only heat source besides the sun. Most winter nights I don’t need to light it, but the occasional night I do, it’s a free source of heat, as most of the wood was free. Those oak trees drop a lot of small branches, which are good to start a fire with, along with the free gum leaves and bark from not far away.

The whole thing, including the burning of leaves, was frowned on and phased out – I suspect by the eighties. Not sure when it became actually illegal.

It is definitely pre-1988. I used to live in Turner in an area that had a lot of oak trees. I loved the smell of those leaves burning away. Rarely would a pile of leaves generate much flame, which disappointed my inner pyromaniac a lot. They generally smouldered away very slowly. People wouldn’t even bother to supervise them. Light it up and walk away. It seemed that mostly older folks got upset when the laws changed. Especially my grandmother – she thought the world had gone mad 🙂

The roaring fires we would get from burning newspapers and junk mail in the incinerators where very impressive. Thick white plumes of smoke could be seen from several suburbs away. And the heat was so intense! Just about every garden in Canberra had one. They even had one at Turner Primary School.

I do miss those different smoky smells from my childhood. Wood fires, burning leaves in street gutters, incinerators, the gunpowder smell after cracker night … all distant and fond memories now.

When did this stop? Not sure. I remember how in the 1970s we used to all enjoy the back yard fires till people starting asking questions about all that smoke – carbon. Those were the days when you didn’t need a shredder for your documents – people just burned everything and cooked some food at the same time. The whole thing, including the burning of leaves, was frowned on and phased out – I suspect by the eighties. Not sure when it became actually illegal.

Interesting read – thanks Paul. When did the smoking rituals stop?

I found this:
“The Environment Protection Act 1997 prohibits the lighting of a fire in open air as well as the burning of garden or other waste in backyard incinerators. Barbeques are allowed providing that seasoned wood, heat beads or gas is used. It is illegal to light any fire, including a barbeque, when there is a total fire ban.”
http://www.legalaidact.org.au/pdf/publications_neighbourhooddisputes.pdf

Interesting read – thanks Paul. When did the smoking rituals stop?

David Pollard - Independent for Yerrabi 2020 - 3 hours ago
Kylie Robinson I’m concerned with mental health support for young people, particularly - but not only - through schools. I... View
Jack Hearps - 9 hours ago
Christopher Stuart Veilands compared to other authorities ... shires etc ... ok.... View
Jack Hearps - 9 hours ago
Bethany Williams your very aware ... the LP is not what it was progressing to be ... it has been taken over by the religious... View
Business 4

Lin Van Oevelen - 14 hours ago
Julie Maynard I know. You're preaching to the converted. :) View
Lin Van Oevelen - 19 hours ago
Kevin Hodder It has long been known that the infection fatality rate is significantly lower than the case fatality rate. Late... View
Darron Marks - 20 hours ago
And how many people can go and get this blood test ? I would personally like to know if I have any antibodies for it ?... View
Food & Wine 5

Kosher Ayatollah - 15 hours ago
Robson Rotation is why we need so many corflutes. Candidates are fighting within their own parties for recognition, not the p... View
News 2

Tara Murray - 18 hours ago
Jason Livingstone not to mention the cull after that which in my opinion wasn’t necessary... View
Jason Livingstone - 19 hours ago
What was the number of wildlife lost due to the fires? 2020 has not been good to wildlife.... View
ACT Election 5

@The_RiotACT @The_RiotACT
A long-running Canberra speakers series on architecture has a new lease of life from COVID-19. The best practitioners from around the country are now on Zoom for inspirational house ideas https://t.co/kTbvy5YAHo (8 hours ago)

@The_RiotACT @The_RiotACT
Keen to get your foot in the property-ownership door? Canberra Raiders star Josh Papali’s home in Ngunnawal, full of sporting memories, will be auctioned on 3 October https://t.co/E0KXmrYRCh (10 hours ago)