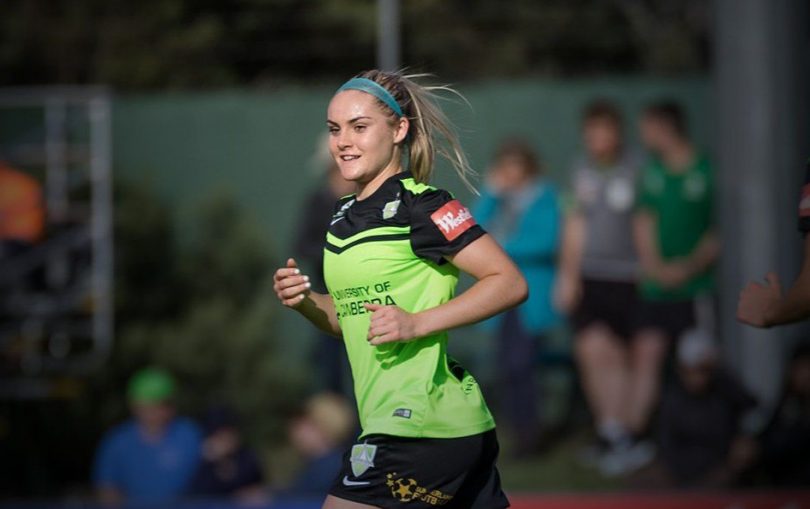 Canberra United superstar Ellie Carpenter has been named the W-League NAB Young Footballer of the Year at the Dolan Warren Awards night in Sydney on 30 April.

Carpenter finished ahead of Melbourne Victory players Kyra Cooney-Cross and Melina Ayres to claim the award for best young footballer in the W-league.

United failed to make the W-League finals for the second time in club history in the 2017/18 season, but Carpenter was a shining light and excelled in her first season in the nation’s capital.

The Olympian said she was thrilled to be named the Westfield W-League NAB Young Footballer of the Year for 2017/18.

“I’d like to thank my club, Canberra United, my coach Heather Garriock, and my team mates. I couldn’t have done it without you guys.”

“I would also like to thank NAB for sponsoring this award and their ongoing support of young female players in the Westfield W-League.”

NAB’s Head of Media & Partnerships, Thomas Dobson, presented the award and congratulated Carpenter on her season.

“NAB is proud to support women’s football, and plays an important role in recognising and rewarding the stars of tomorrow through the NAB Young Footballer of the Year Award,” Mr Dobson said.

“It was also fantastic to provide Ellie’ junior club, the Cowra & District Soccer Club, with a NAB Club Recognition Award upon her nomination. It is great to see our partnership supporting the development of more stars of Australian football.”

Carpenter is currently playing overseas for the first time during the W-League off season after the teenager signed a deal with National Women’s Soccer League club Portland Thorns FC.

simm - 24 minutes ago
PLANNING the main entrance on Canberra Avenue is a sensible and practical choice . Franklin street Cafe/Retail strip already... View
abdul mutawe - 32 minutes ago
Having performed building works for Mrs Liangis over past decades, I have to say she is very astute, capable and fair. And sh... View
News 124

Lyn Kemp - 49 minutes ago
Goodbye Zed, hopefully. You've done absolutely NOTHING for the ACT 😖😖 View
Capital Retro - 4 hours ago
"Climate change, gender equity, citizenship, refugee policy, economic and cultural renewal, and a First Nations Voice to Parl... View
Shane Carter - 5 hours ago
Who-da-thunk-it, the man who’s voted against the ACT having self governance. His seat under threat from the ACT calling him... View
Community 8

bikhet - 50 minutes ago
This seems to be your thing. Never knew the pluviometers were there. Is their output available on the web somewhere? I'm a bi... View
brendan eyers - 2 hours ago
Cool to know what the cubes are, though I've never noticed one. Worth a mention that there are a hundred or so pluviometers a... View
brendan eyers - 3 hours ago
They are called standpipes. Connected to mains water and used to collect water samples for testing. View
News 2

MERC600 - 56 minutes ago
Yep , full marks to the Raven. What I would like to know is what would you pay for a coffee to be delivered by this drone mob... View
Capital Retro - 2 hours ago
The next step is to equip the ravens with lasers. Death to all drones!... View
News 2

chewy14 - 2 hours ago
"A responsible and competent government would" Well there's your first problem. They haven't been forthcoming with robust bus... View
michael quirk - 3 hours ago
The government has yet to provide evidence to justify the light rail extension, the viability of which is tenuous given incre... View
News 41

Neil Chandler - 4 hours ago
Anthony Willing but i have concerns about how it would work in an evacuation where the lifts can't be used by people with mob... View
Opinion 116