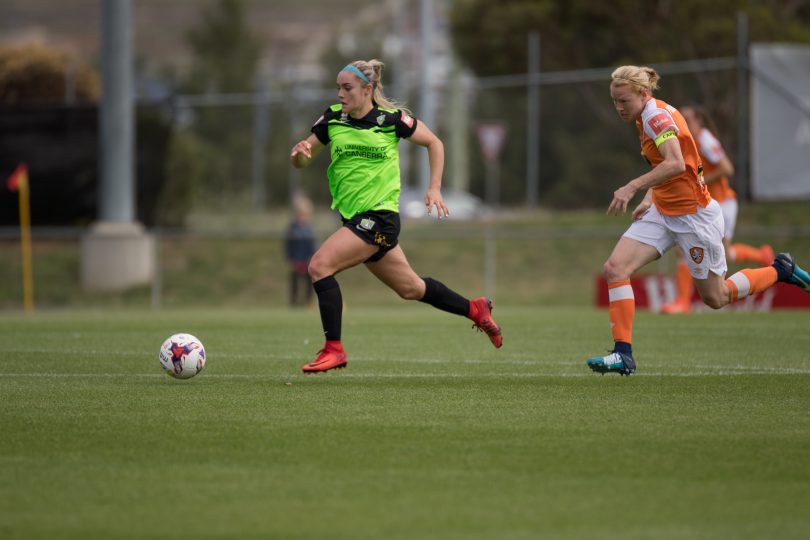 Canberra United defender Ellie Carpenter has been nominated as the NAB Young Footballer of the Year for the Westfield W-League for the month of December.

Carpenter, who is the first player born this century to represent Australia, joins Melbourne Victory’s Kyra Cooney-Cross (November) as a nominee for the prestigious award.

The seventeen-year-old Carpenter said it was great to be nominated and to see her junior club rewarded.

“It’s very exciting to be nominated, and it is awesome to get some recognition,” she said. “Yeah I think it will be good for the club, they started my journey and it will be nice to see them recognised through this.”

Head Coach Heather Garriock said it was no surprise to see Carpenter nominated after her performances so far.

“She has been outstanding not only for the club but for her country as well. This is a big accolade and it is more surprising that she was not nominated already,” Garriock said.

In December 2017, Carpenter featured in all three matches for Garriock’s side. While the team from the nation’s capital didn’t record a win in those outings, Carpenter was a shining light during those losses.

Carpenter displayed her versatility during December 2017, playing in both defence and midfield for Canberra as they sought to enhance their Westfield W-League Finals Series chances against some of the competition’s top teams.

Carpenter will also play an important role when Canberra United face Adelaide United in a crucial clash on Sunday. Canberra is 4 points behind fourth-placed Perth, but have a game in hand. They face an Adelaide team who has struggled in 2017 with only one win so far this season and languish at the bottom of the ladder.

With the past two matches between the two teams resulting in two-all draws, Carpenters defence will be vital to a Canberra United win.

The heat could also play a role in the match, with Football Federation Australia delaying the kick-off of on Sunday due to extreme heat.

There is currently a forecast of 36 degrees for Canberra on Sunday, with the game originally scheduled to kick-off at McKellar Park at 4.30 pm being now moved to 6:30 pm.

Monica Tiffen - 44 minutes ago
They are so lovely, Butsome really worry me Swaying in the wind over Homes! View
Rowena May - 49 minutes ago
and when people express their concerns the govt says no you can’t cut them down….. but hmmm the Northbourne Ave ones were... View
Greg Myat - 1 hour ago
Still it would be a shame to cut everything down due to a once in how many years event. View
Community 47

Peter Miller - 57 minutes ago
Peter Rudd agree agree agree. The govt needs to review street tree policy urgently.... gums are not a good choice. View
Zoe Lewer - 10 hours ago
Bob Foster yep. Us humans sure have made an impact. We are the problem. You are right. The day the people who were invaded ch... View
Joy Gosden - 11 hours ago
Yes. What were they thinking planting them in our suburbs. They drop limbs attract pests and stop grass growing around them.... View
News 319