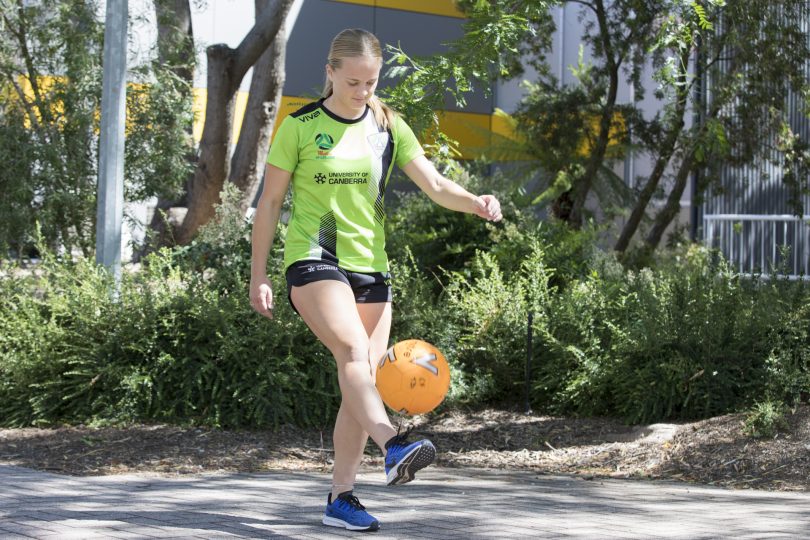 Hayley Taylor-Young doesn’t live the life of a typical teenager, juggling school and half a dozen football sessions a week, on top of traveling with Canberra United to play interstate. Photos: Michelle Kroll, Region Media.

Most school kids can’t find time to clean their room let alone fit in half a dozen training and tactic sessions a week on top of playing professional football interstate. But Canberra United’s newest debutant has done just that.

At just 17-years-old, Hayley Taylor-Young was selected by coach Heather Garriock for her first starting role against Perth last Friday night after making her W-League debut in United’s win against Newcastle in Round 3.

“It is very exciting for me. I’m proud of myself for making it this far and proving myself to everyone that I can be better, and reach this level and play with these sorts of girls,” Hayley told Region Media.

“I wanted to do it so much that I just focused and worked as hard as I could in the beginning and I guess I got there in the end.”

It was a disappointing end to the game for United which conceded a 90th-minute goal from Perth defender Kim Carroll, sharing the points with the Glory after failing to capitalise on numerous chances throughout the game.

While temperatures still lingered around 30 degrees at 8:00 pm in Perth, Hayley says the heat and humidity really started to take its toll as fatigue set in.

“The heat affects us quite a bit because we aren’t used to that level of heat,” she said.

“It is hot in Canberra but Perth was like 40 degrees. It cooled down when we were playing but we were still getting fatigued and a bit tired. I reckon we still put up a good fight, though.”

The debutant admitted she got a bit flustered after being called up to the starting 11, only finding out that day that she would be lining up next to the likes of Norwegian international Elise Thorsnes and American Simone Charley. 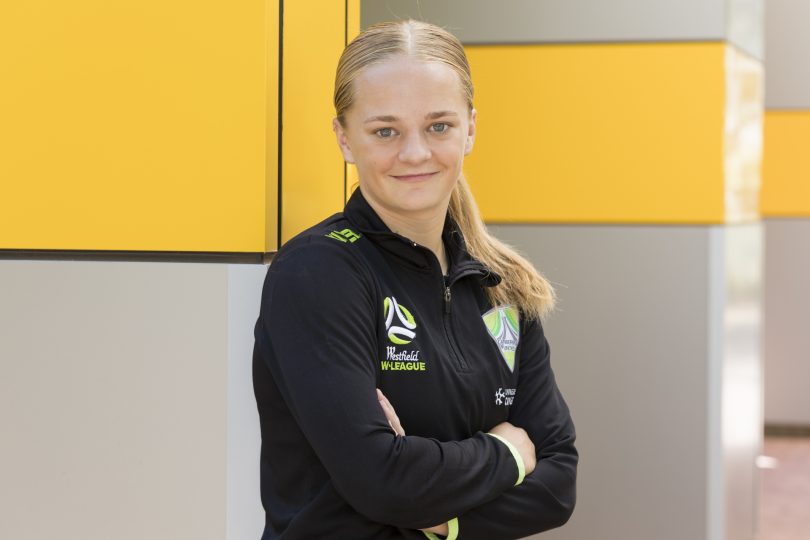 Hayley Taylor-Young is looking to make her mark on the W-League after a breakout season in Capital Football’s National Premier League.

While Taylor-Young says parts of her game could have been better, she is just happy to have her first (nearly-full) game under her belt.

“I think I was just a bit nervous, because of starting the game, I think it just got to me a little bit,” she said.

“I don’t think I did that badly, but there are moments where I could have done better, maybe taken a few shots instead of crossing it in, but it is all a learning curve so hopefully next week I’ll be better.

“I’m not usually shy [in front of goal] but I don’t know, maybe I need to be a bit more selfish and back myself.”

Still trying to find her rhythm on the big stage, Taylor-Young is no stranger in front of goal, netting 30 goals in 17 games for Canberra United Academy in a breakout season in the National Premier League (NPL), after coming through the CU pathway programs.

The performance saw the Canberra local impress Garriock on her way through the United Academy. Garriock compared Taylor-Young to Matilda players Hayley Raso and Ash Sykes. The teenager was then selected to step up to the senior squad, signing a contract with United to follow in the footsteps of Academy proteges Laura Hughes and Karly Roestbakken.

“[The senior players] are a huge help, they have taught me so much,” Taylor-Young told Region Media.

“We have international forwards, we have Karly [Roestbakken], so it is helpful having them because you just learn so much and you want to try and get up to their level so it pushes you to be better.”

While most Canberrans will be winding down over the next week, preparing for Christmas parties and overindulgences, the United girls will be focusing on their must-win match in Adelaide on Sunday, before flying back to Canberra to face Western Sydney on Boxing Day.

Garriock’s girls will travel down to South Australia this Sunday to take on last-placed Adelaide United who are still searching for their first win. In a crucial game for the Canberrans, the girls will be looking to fight against the heat away from home and take all three points in an effort to hold on to a tightly contested fourth place.

Brisbane Roar have been nipping at their heels after defeating Canberra United two weeks ago at McKellar, currently sitting in fifth, only a point behind and with a game in hand.

Canberra United have also announced that an injured Katie Stengel, who did not play against Perth last week due to an ankle problem, will not be travelling to Adelaide and will instead be rested for a couple of weeks.

This Sunday’s game is set to kick off at 4:00 pm at Marden Sports Complex in Adelaide. Tickets from Ticketek.