Canberra winter favourite turns 100 this year, but what makes the puffer jacket such a hit? 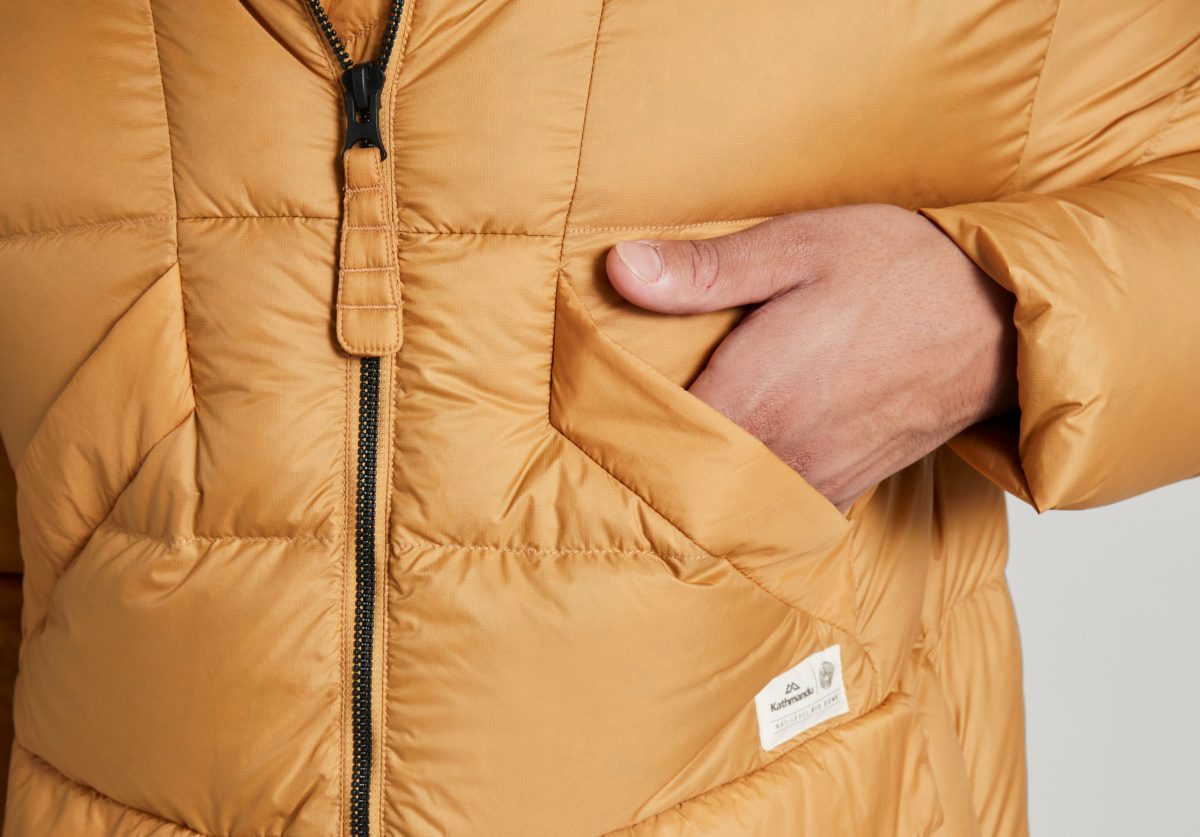 Elizabeth Coleman showcases her fashion adventures in styling, thrift shopping, upcycling and resizing on her Instagram account elizaknowsclothes. A school finance officer by day, she’s hardly ever to be seen wearing the same combination. And during the colder months, chances are there’ll be a puffer jacket in the mix.

“Once considered ugly, the puffer is now a staple of the Canberra wardrobe and has diversified in style, length and colour,” she says.

This year marks 100 years since Australian chemist and mountaineer George Finch first revealed his invention on the slopes of Mount Everest. While the others in his team were in balls of wool and tweed, he donned a jacket made from the skin of a hot-air balloon stuffed with eiderdown.

A fellow climber apparently retorted, “I always knew the fellow was a shit.”

Further into the climb, however, the mocking had fallen silent. It might not have looked all that great, but the new-fangled puffer jacket had no peer for warmth. Equipped with his other invention – oxygen bottles – Finch reached 8,360 metres – the highest any person had climbed.

Nowadays, you don’t have to tackle the world’s tallest mountain to catch sight of a puffer jacket – a walk down Lonsdale Street in Braddon is enough. 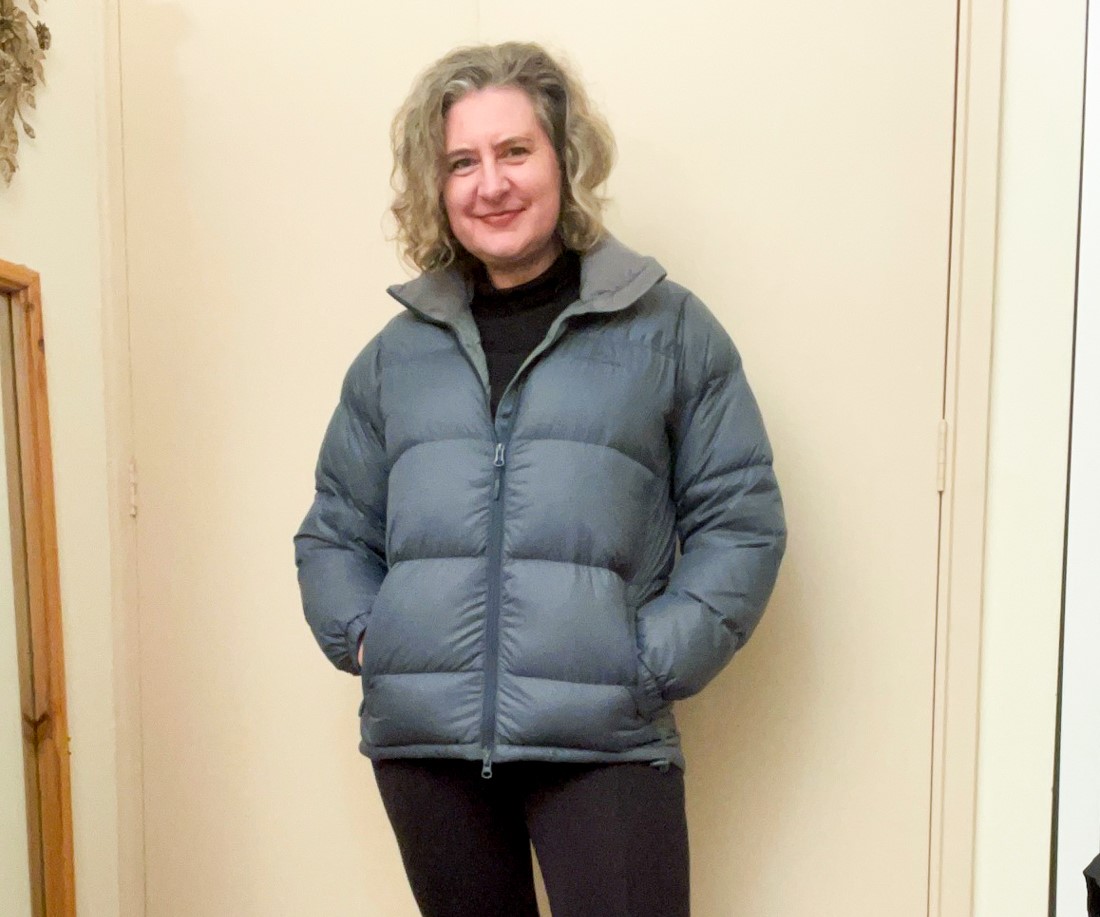 “I think I have seven puffers,” Elizabeth says.

“They’re water-resistant, wind-resistant, ultra-light and really, really warm. And if they get dirty, simple sponge them down and hang up somewhere to dry.”

Her collection starts with the “plain Jane of puffers which always does the job”.

“It’s the Canberra hip-length go-to puffer for everyday all-around winter use. Usually bought at Kathmandu, these most commonly come in a black or a dark neutral tone.”

New Zealand company Fairydown might have been the first to pick up Finch’s design in 1953 to create a jacket that looks remarkably similar to today’s puffer, but in Canberra, it seems Kathmandu is king for this winter staple.

General manager of product Robert Fry says the critical ingredient is down, the layer of fine feathers found closest to the skin of birds.

“Down is incredibly light, unexpectedly warm, and has a wide comfort and temperature range,” he says.

Robert says the most significant change over the years has been in managing to pack this warmth into a slimmer design.

“Every year, lighter and lighter fabrics are developed that exceed durability expectations even as they come to market weighing less,” he says.

“Particularly with down, [the jackets are] delightfully broad across a wide range of temperatures and conditions. And the unexpected light weight of the garments reinforces the joy of use since, essentially, they are fun to wear!” 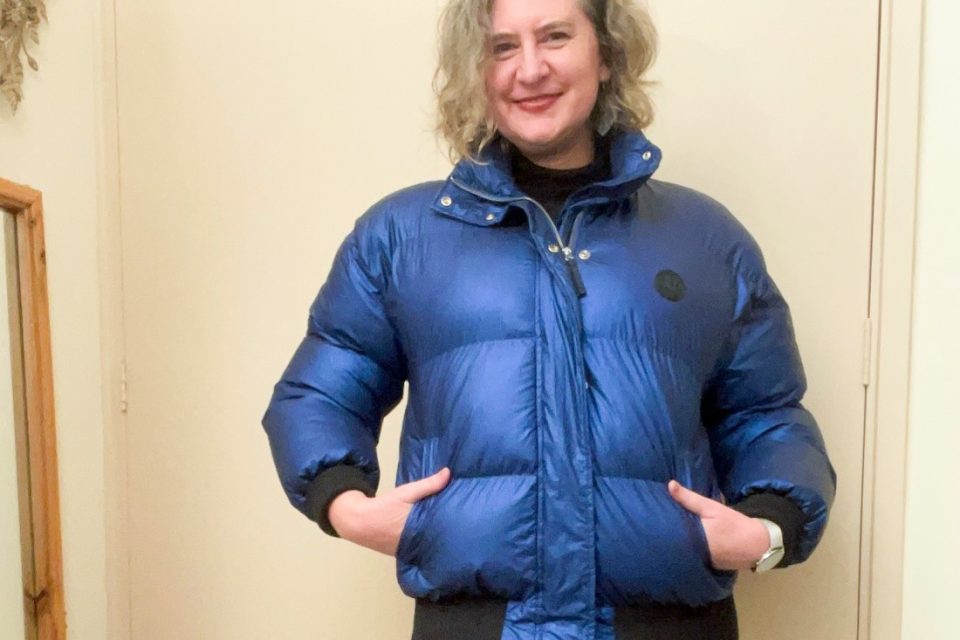 The puffer plus. Photos: Elizabeth Coleman. 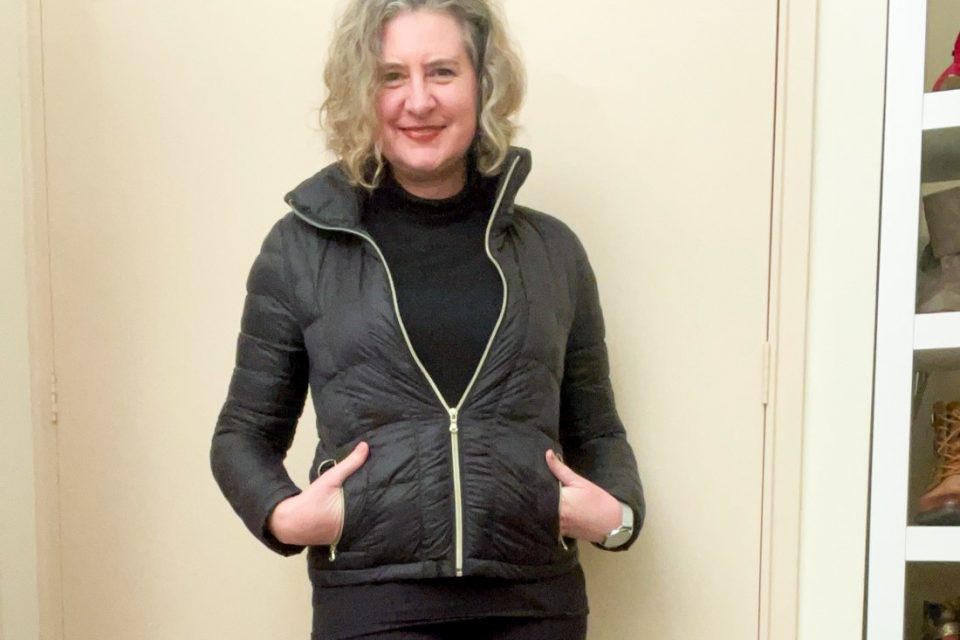 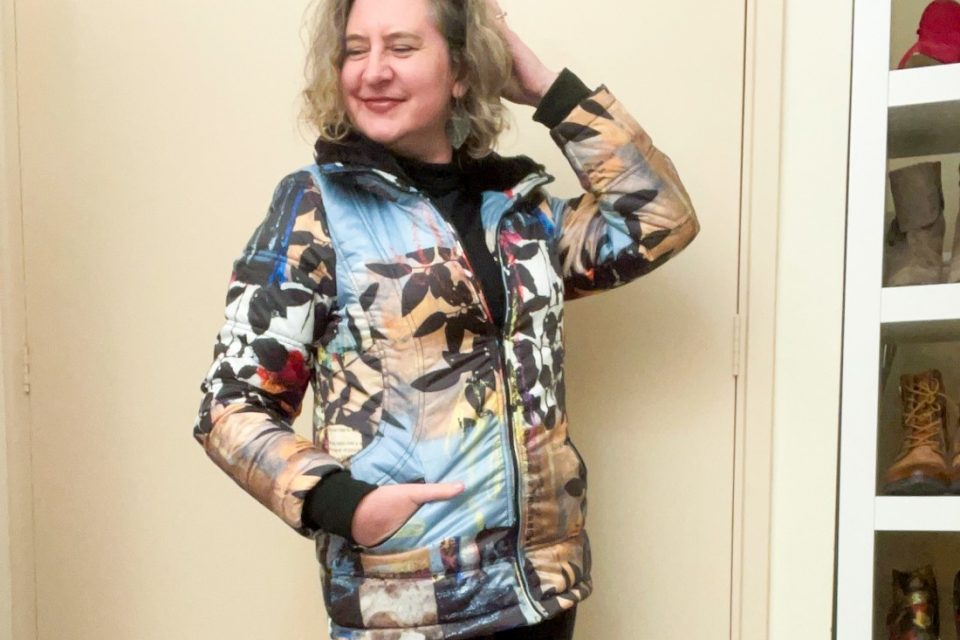 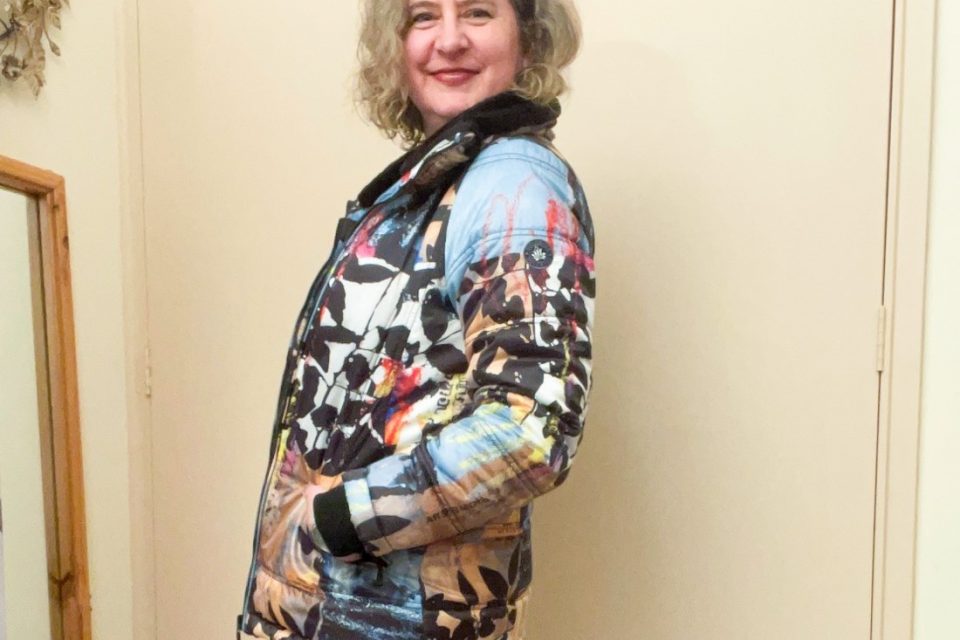 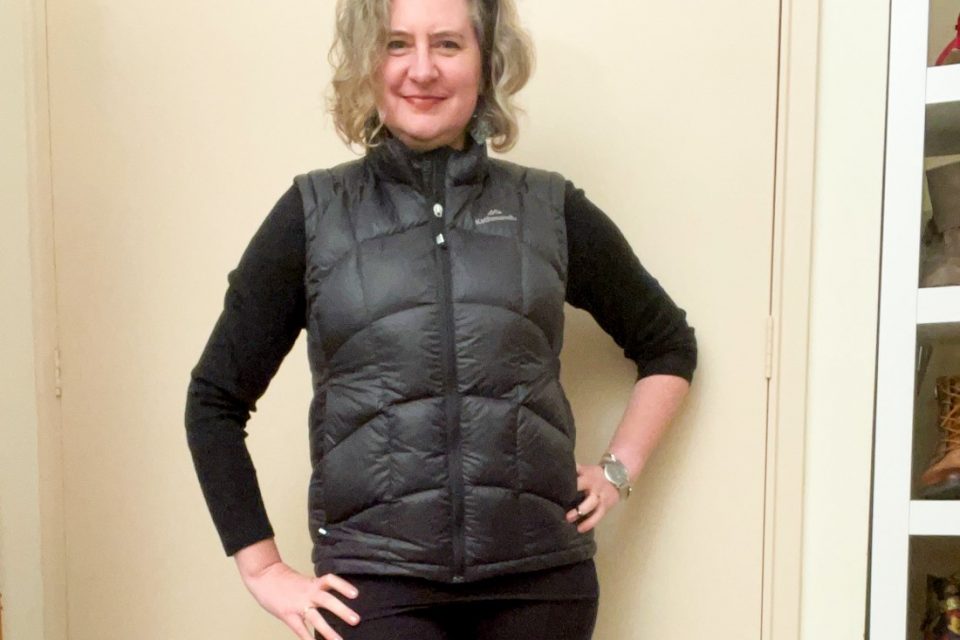 This brings us to Elizabeth’s ‘Puffer Lite’, which she describes as the “slimmer sister of the Classic”.

“It’s the perfect winter travel jacket when moving away from the Canberra cold for relatively warmer winter climes – say the coast or Sydney,” she says.

“It has the bonus of being very light in weight and squashing very small for travelling, backpacking, interstate day trips.”

Elizabeth’s home is fitted out with a dedicated sewing room. Almost everything she manages to pick up from online boutique fashion stores and op-shops for cheap passes through here for modification. This explains her love for the ‘fashion puffer’.

“This is the prettier sister of the classic puffer, often sporting a faux fur collar,” she says.

“Heavy on duty and style, it’s perfect for Canberra winter socialising, which may involve sitting in outdoor cafes or attending parties where the guests spill outdoors.”

She suggests the best in local fashion puffers can be found at Nunie Boutique in Yarralumla.

On the other side of the equation is the “super-size-me, Michelin man, over-the-top, ultra-warm glossy number”.

“This usually sports name-brand badges, a metallic finish, gold zips, and studs. Best worn at the snow or standing around in Civic late at night in the dead of winter, preferably in line outside a nightclub.” 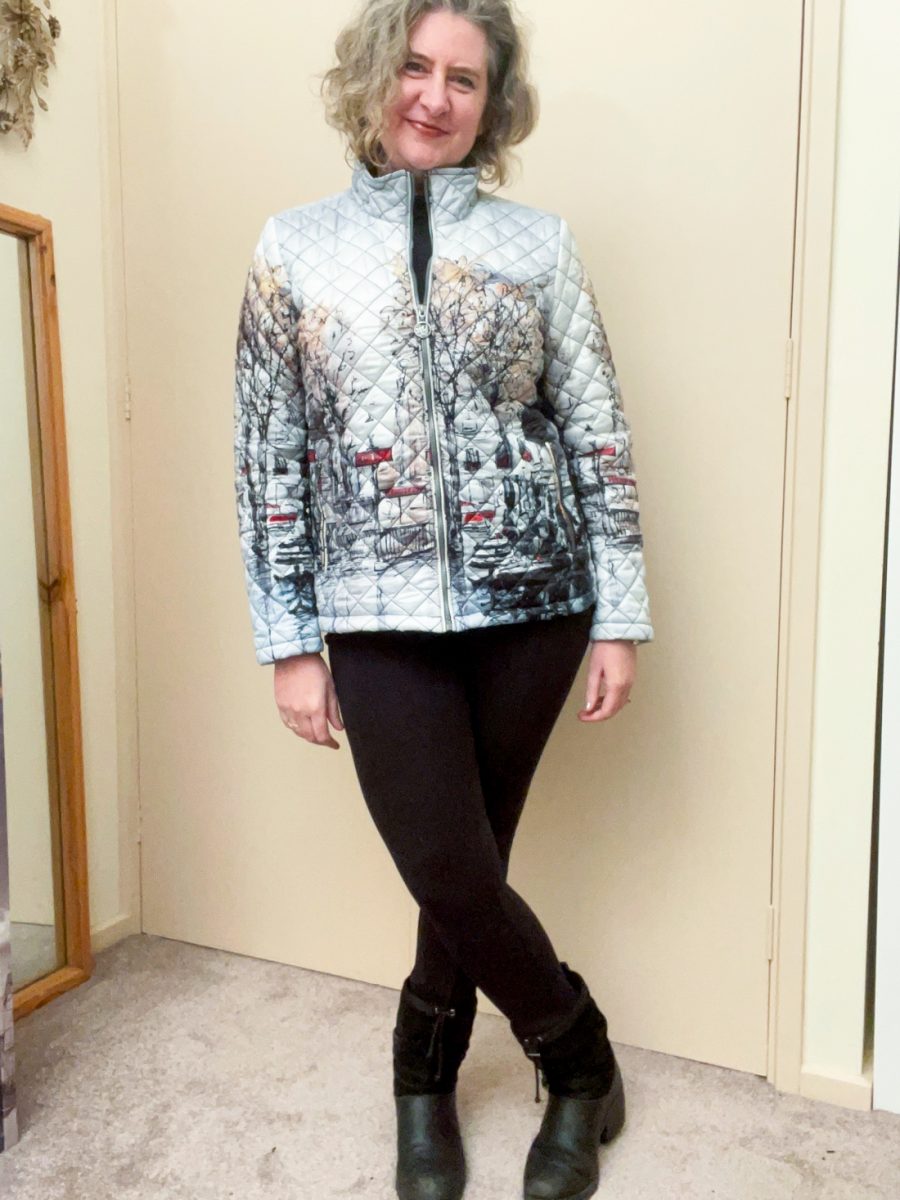 They get even bigger with a new sleeping bag style.

“This long-length number is for when total warmth but not too much activity is required,” she says.

“It’s best suited to standing around at soccer practice when there’s snow in the Brindies. Don’t forget your snow boots. It may also double as a sleeping bag in various situations.”

You get the idea – there’s one for every situation … and they’re immune to moths.

Not such a hit with the poor animals providing the down.

Sorry, but I don’t believe that the lightweight down jacket is only 100 years old. China had silk, and a lot of ducks, thousands of years ago. Did no one for millennia think to stuff a jacket with feathers?

Indeed you are right, Tom: https://treksumo.com/history-of-down-jackets/

They were made fashionable again as “puffer jackets” by Princess Diana, according to this link.

They were very fashionable with one side in the Korean War.

The other side had unwieldy WW2 greatcoats.

Such a hit? People’s lack of fashion sense and understanding of how layering works.