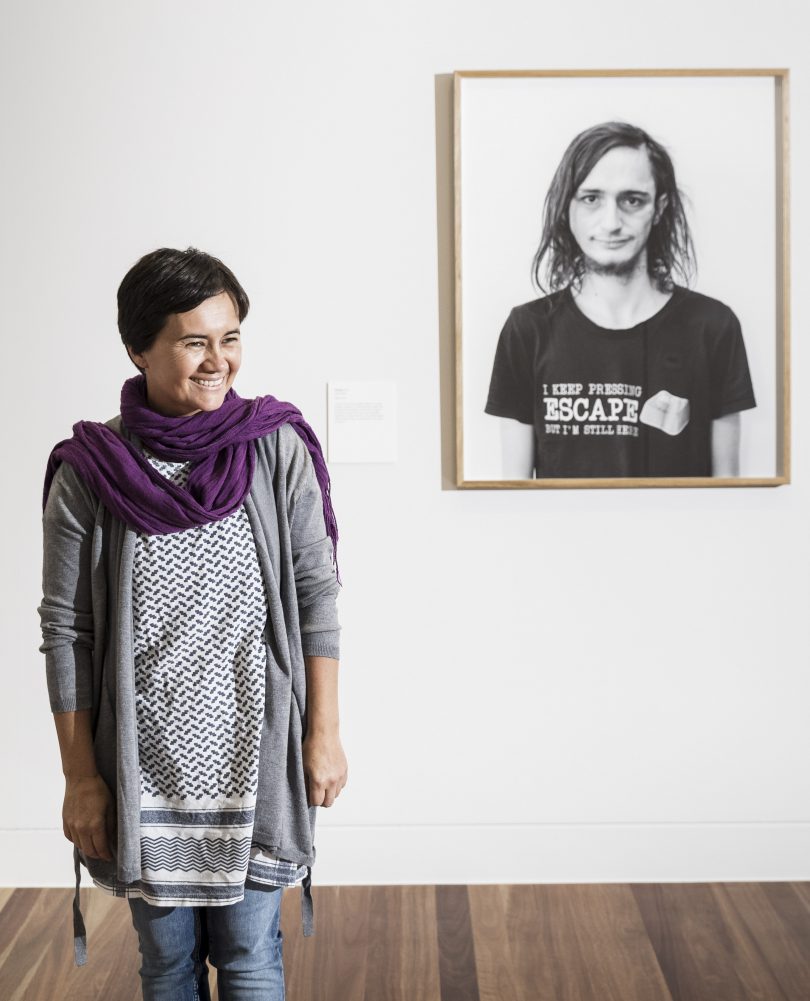 Self-confessed ‘Belco girl’ Lee Grant says winning the 2018 National Photographic Portrait Prize for her portrait of a young Ainslie Village resident titled Charlie is a great validation of her craft and the prize has extra personal significance for her, being awarded in her home town.

The National Portrait Gallery announced the winners on Friday evening (23 March), with the Highly Commended prize going to Victorian photographer Filomena Rizzo for her portrait titled My Olivia.

The Canberra photographer may have moved to Moruya on the South Coast six months ago but she still has a strong connection to where she grew up, and still teaches at her alma mater, the ANU School of Art.

An early body of work was titled Belco Pride, and she says, “I’m a Belco girl through and through.”

She met Charlie last year while working on a collaborative art project at the social housing community and knew immediately that it was going to be good picture.

“I was excited when I went home and processed those pictures,” she said.

The ‘phenomenally good’ T-shirt with its quirky message helped and she felt drawn to Charlie, who lived at Ainslie Village to be near his father.

She said Charlie was a ‘gift’ who just happened to be wearing that T-shirt on the day and she appreciated his sense of humour.

“How does someone end up living in a place like that at such a tender age? I really felt quite emotional about it,” she said.

“I responded quite viscerally and emotionally to the situation. I wanted other people to feel that too, about somebody, somebody who is considered a nobody by many people.

“I wanted to show we’ve all got a story, have our own journeys. We should all be a little bit more humane about one another.”

She published her first book, Belco Pride, in 2012 and her photographs are included in the collections of Parliament House, the National Library of Australia, Monash Gallery of Art, Canberra Museum and Art Gallery as well as numerous private collections.

Ms Grant has a degree in Anthropology and a Masters in Visual Art from the Australian National University, where she also teaches in the Photomedia Department. 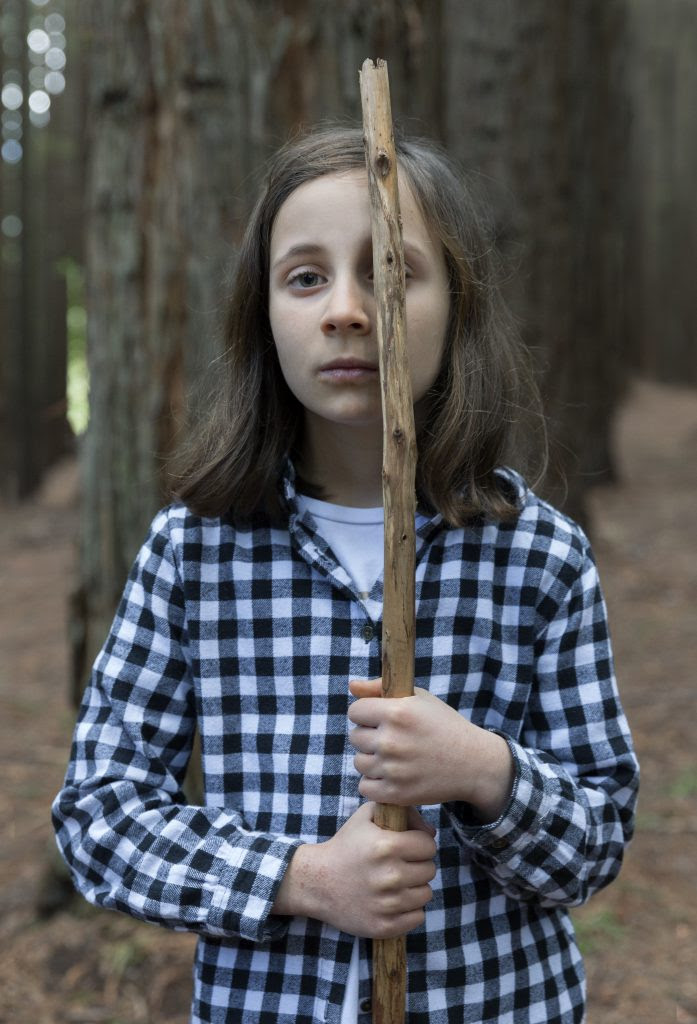 The Senior Curator at the Portrait Gallery and co-judge of this year’s Prize, Dr Christopher Chapman, said it was the power of humanness that shone through in the two award-winning portraits.

“It’s a big deal to make it through to the final exhibition selection and with my fellow judges Petrina Hicks and Robert Cook, I was looking closely at how the portraits spoke to me, how they conveyed their story uniquely,” Dr Chapman said.

“As the possible winners came into view from within a very strong field, it felt like we were distilling something of the essence of portraiture, and the winning portraits possessed that essence for us.”

Co-judge and photographer Ms Petrina Hicks said “it felt as though the distilling process was to extract truth­­­ -­ that we narrowed down the images that felt true”.

Co-judge and Curator at the Art Gallery of Western Australia, Robert Cook, appreciated that both works depicted a young individual making their own way in their lives and into the wider world.

“It’s like both subjects are facing futures that are uncertain. And they’re doing so bravely. It’s the bravery that you have when you’re afraid, when you yourself might crumble and you figure there’s only a fifty-fifty shot at making it through. What the artists have done here is present this dilemma, one we all get on some level, with compassion, without artifice and without false heroics,” he said.

The Gallery awarded the Art Handlers’ Award earlier in the week to Stephanie Simcox for her portrait titled Joey.

People’s Choice voting opened on 23 March 2018 and the public can vote for their favourite image online at nppp.portrait.gov.au or in person outside the exhibition space.

One voter and their guest will win a hotel package that includes three nights’ accommodation at Crowne Plaza Canberra.

The National Photographic Portrait Prize opens to the public on Saturday 24 March and is on display until Sunday 17 June 2018. The exhibition will then tour around Australia. For more information visit nppp.portrait.gov.au.

Should go see this over the weekend Erin

Didn’t know it was on already!!! Let’s go to breakfast then see this 😁

While it’s nice to see someone win a prize for taking a photo I can’t help but think it was Charlie that allowed the picture to be so arresting. I suppose he gets a thanks but no prize money.

I had a handful of rather fascinating journeys to Ainslie Village in my younger days...

TimboinOz - 55 minutes ago
What 'Romsey Quints' used to call 'muttering wrotters' are pretty boring folks most of the time. With the exception of Romsey... View
Lifestyle 14

Wendy Boyce - 2 hours ago
So awesome 👏 View
Margarita Elisabeth - 3 hours ago
Alpacas are soo cute! View
Jonny Ivan - 3 hours ago
fox will kill ducks and chickens if not locked up at night View
Community 42

Doug Alex - 3 hours ago
Tramcar Trev Before they redeveloped Glebe Park, used to remnants of the train line. Back in the '80s when I did some work fo... View
News 5

Futureproof - 5 hours ago
The most vaccinated city on Earth, but the lockdown continues. Remind me why were we encouraged to get vaccinated... View
roxebina - 6 hours ago
As a small business owner, it has been great to be up and trading for the past couple of days, even with this ridiculous book... View
JC - 7 hours ago
It’s not fair, but really the speed at which things are changing, especially with NSW annoying things without telling the P... View
News 2

Brett - 7 hours ago
I believe this 40k zone is unreasonable. If you're drive from, say, Sydney to Woden, you'll go from 110kph to 100kph to 80kph... View
purplevh - 21 hours ago
So it would have been a significant cost and strain on resources to send out a warning letter to everyone caught speeding dur... View
News 7

JC - 9 hours ago
Sam there is a lag, so case numbers will rise again in about a week or so due to reopening and the drop we are seeing is refl... View
Opinion 27

Capital Retro - 19 hours ago
Well, if they believe that coal fired electricity generation which has been on their doorstep for 50 years is killing them th... View
Lifestyle 4

Sally Godtschalk - 23 hours ago
What a great article. Congratulations. View
show more show less
*Results are based on activity within last 7 days

UPDATED 4 pm: As Friday draws nearer, the rules governing how our COVID-normal will look continue to be released. As expected,...
Property 25

Everyone loves a good pub feed, a refreshing beer, or simply catching up with mates in a laid-back environment. Being...
Lifestyle 37

Along with many other Canberrans, I loved the recent story about the nesting Gungahlin ravens taking exception, followed closely by...
Opinion 27

A few weeks ago, fellow columnist Ian Bushnell wrote about the proposed residential/aged care development on Cotter Road that will...
Property 25

@The_RiotACT @The_RiotACT
This couple has the passion and all the skills required to undertake a sympathetic #renovation of one of Canberra's iconic mid-century modern #homes. We're looking forward to seeing the finished product https://t.co/bkM1mb6xvA (17 minutes ago)