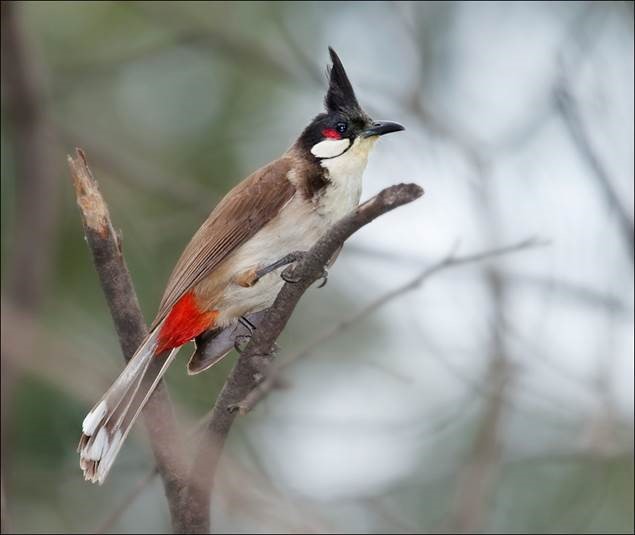 This colourful bird may look harmless, but the red-whiskered bulbul is considered both an environmental and agricultural pest, and ACT’s Conservator is asking Canberrans to be on the lookout.

The brown bird with a white neck, a distinctive red cheek patch and pointed black crest on its head was spotted in the Lanyon Valley area last month, three years since its last reported sighting in the territory.

Conservator Ian Walker is concerned about the damage the bird can do to the environment as it competes with local native birds for food and is a predator to small reptiles and insects.

“The red-whiskered bulbul can contribute to the spread of many invasive weeds, including blackberry, African boxthorn and privet,” Mr Walker said.

“In other areas of Australia, it has been recorded damaging fruit crops, such as figs, strawberries and pears and poses a threat to other crops such as grapes and berries, which could affect local industry.”

The bird was deliberately introduced into Sydney and Melbourne in the 1800’s and populations have since expanded, with the nearest known established population in the Illawarra region.

ACT’s Conservator believes the bulbul will establish further populations in Australia if the existing birds and new incursions are not managed.

“At this stage, we are not sure if the birds positively identified were escapees from birds held illegally in captivity or part of a broader feral population,” Mr Walker said.

“It’s important to respond to an incursion of this pest bird species as early as possible before population numbers become difficult to manage.”

Mr Walker reminded residents they cannot keep prohibited and notifiable pest species as pets in the ACT which includes the red-whiskered bulbul. Keeping or supplying a prohibited pest species can carry a fine of up to $7,500 for an individual or $37,500 for a corporation.

ACT’s Conservator is asking anyone who spots a red-whiskered bulbul to report it through Access Canberra on 13 22 81 and, if possible, to provide a photo of suspected sightings along with a location and time.

Photos and any other information can be emailed to EPSDInvasiveanimals@act.gov.au

There's only one way to solve this. More cats!

Why ???? That rubbish Indian myna is no better, and those things are now everywhere ??

Yes I know Mathew..... but it’s too late, the little bastards are everywhere

Pied Currawongs and the fools who feed them should shimmy up to the top of the list too.

Maybe we should release some Bolivian tree lizards to eradicate them

Good idea. They've already wiped out the Dodo, the Cuckoo, and the Ne-Ne, and they have nasty plans for the Booby, the Titmouse, the Woodcock, and the Titpecker.

But what happens when we're overrun by lizards?