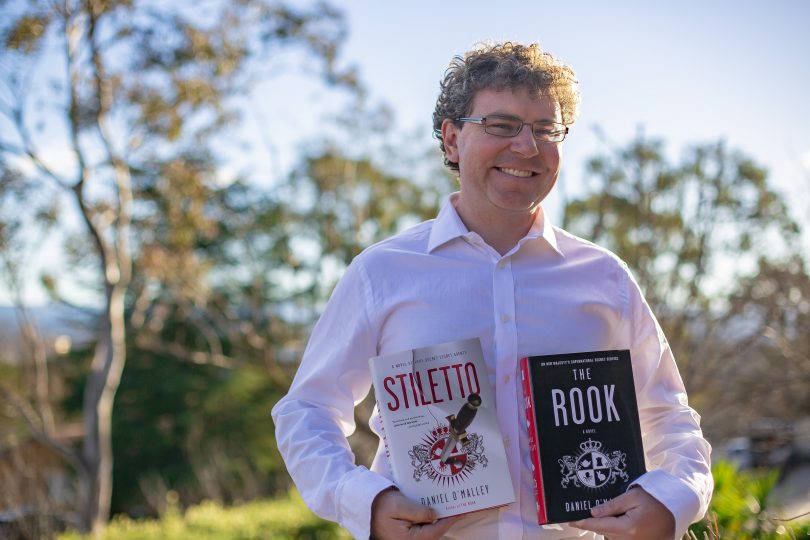 Daniel O’Malley is the acclaimed author of The Rook. Photo: George Tsotsos.

A university student on his last day of completing a Master’s degree in medieval history suddenly finds himself with free time on his hands.

Settling into his couch, he muses over an idea for an urban fantasy novel, perhaps about a super-secret, supernatural British intelligence service…?

Intriguing. Why not? It would be a good way to pass the time…

Except that he did so much more than just pass the time. It resulted in an award-winning novel, spurred a second and a third, and is now the latest piece of literature adapted for a major international television series, drawing in big Hollywood names like Emma Greenwell, Joely Richardson and Olivia Munn.

Canberra’s very own Daniel O’Malley is equal parts surprised and delighted that his first novel, The Rook, published in 2012 by Little Brown and Co., is now the inspiration behind a TV series of the same name, starring Greenwell of the US-version of Shameless fame, and other notables, which premieres in the US on Sunday and will be available for Australian audiences to stream via Stan on 1 July.

Creative writing has always featured heavily in this author’s life. He cites his parents as the reason he became a bibliophile.

“I’ve always been a massive reader,” Daniel confesses. “When I decided to go to the US to study, my parents were very supportive but they gave me one condition: I had to write them a letter each week.”

But that wasn’t the challenge, Daniel says. An additional condition was that the letters had to be entertaining. One would imagine living in a relatively uneventful suburb would have created particularly challenging circumstances, but it is also the reason his interest in creative writing blossomed.

Nowadays, Daniel oversees press releases from the Australian Transport Bureau, a far cry from the adventurous stories he would have regaled his parents with, which is probably why he couldn’t stay away from writing for too long. He is currently finishing up his third book, finding time to write during his lunch breaks and weekends. 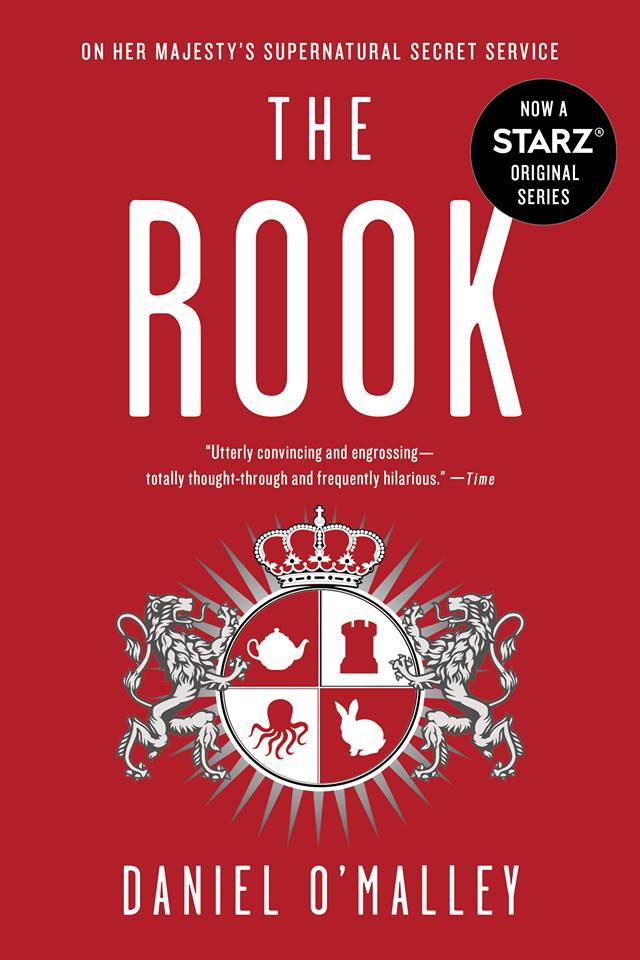 Many secrets are unearthed in Her Majesty’s supernatural secret service.

The Rook has a particularly fascinating plot that marries science-fiction with urban fantasy – but conceived of in the real world, as opposed to a dystopian alternative universe towards which many fantasy writers tend to gravitate.

It has a captivating opening sentence: “Dear you, the body you are wearing used to be mine.” A woman wakes up in the middle of London surrounded by bodies, all wearing latex gloves, and finds the letter in her pocket. Thus begins a thrilling whodunit drama, as the woman tries desperately to piece together her former life – a life she does not remember, but one that is in imminent danger from forces that possess supernatural abilities. Does she have those abilities too?

Daniel says he was always fascinated by the concept that our identities are entwined with our memories, and how successfully those two concepts could survive independently.

“Occasionally in lectures, my mind would wander, and I would think of how anyone would respond if they woke up and realised they had amnesia,” he says. “As I developed the story, more questions came up and I had to answer them, and that’s how the plot unravelled.”

Like any author, Daniel went through the usual drafting and redrafting phase, initially after careful editing by his mother, a writer herself, and then with his agent, Molly Glick, whom he says is the embodiment of dedication. The process even included a 24-hour period of complete and utter panic when his computer crashed, taking with it hundreds of pages of the first manuscript (fortunately, he managed to restore some of it).

“I worked with Molly to get it to where it is today and then it went to publishers. And then everything happened very quickly,” says Daniel, who by that time had moved back to Australia and had to liaise with publishers who worked on New York time, which meant several hushed conferences in the hallway in an attempt to not wake up his parents.

It was Stephenie Meyer, the famed author behind the Twilight saga who saw screen potential for the book and reached out to Daniel. They collaborated with “very clever” screenwriters Sam Holcroft and Al Muriel to create the TV series, in which Daniel even makes a surprise cameo appearance!

“They’ve made some surprising changes to the story, which I like. It will be interesting to see what people think of the show,” he says. 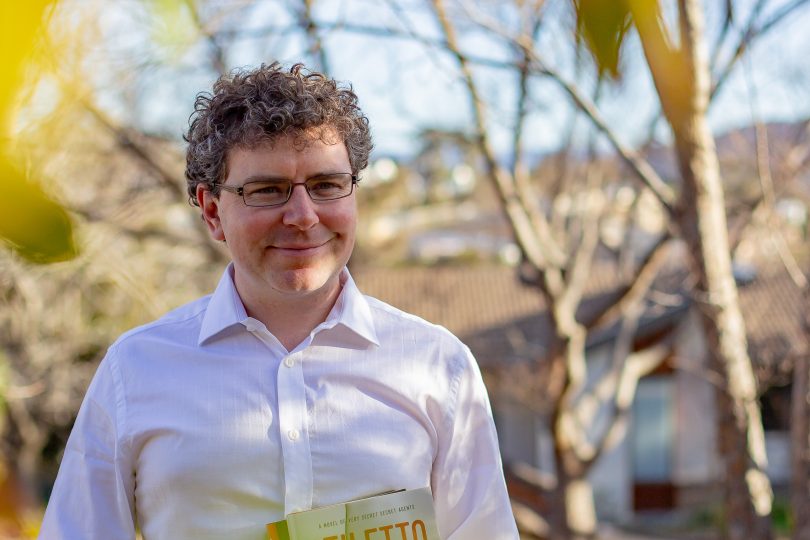 Daniel even makes a cameo appearance in the show.

More writing is definitely on the cards for this modest Canberra author. “I write as much for my own pleasure as anything else,” he says.

It’s a passion that has taken him from the halls of Ohio State University to the red carpet in Hollywood.

“I’m in a constant state of delight,” he beams.

The Rook is available in all leading bookstores. The TV series premiers on Stan on 1 July.

Fabulous books by a modest, engaging and lovable author. This success is richly deserved. Bravo, Dan!

Loved The Rook and Stiletto!

Loved reading The Rook. Should make a terrific series!

austted - 36 minutes ago
There is a good reason why our early settlers planted deciduous trees near their houses. We need to get away from this myth t... View
TimboinOz - 4 hours ago
We have three gum trees close to the street - probably in TCSS's area, and I wouldn't be without them. Yes, there's a risk. View
News 33

phydeaux - 37 minutes ago
I doubt the present value of the QR system compared with its original use, although I am extremely confident it never did hav... View
phydeaux - 47 minutes ago
TheSilver, I recall you have previously been asked for the references for those studies but I do not recall seeing a response... View
jorie1 - 1 hour ago
I disagree with you. The governments over-reacted and there will be a big backlash against them for the way they have mistrea... View
News 230

Jimbo Lambert - 1 hour ago
Justo Justo some people have driven that stretch of road for 30 or 40 years at 60km/h. If they suddenly reduce the limit it i... View
Dean Soccol - 2 hours ago
Nathan Grieve in Queensland every time we get a fine we lose points. So if you are one of those that don’t care about the m... View
Nathan Grieve - 3 hours ago
Andrew Nelson not every offence comes with demerit points, so unfortunately that statement is incorrect View
Community 8

King O’Malley: the man who made Canberra dry

@the_riotact @The_RiotACT
Extension of support for #Canberra businesses - especially small #businesses - is welcome, but will it be enough to keep them from disappearing? Local experts have their doubts https://t.co/o4s1D2OGsv (60 minutes ago)