What few houses are available for rent are being let for record rents. Photo: File.

Renting a house in the ACT now costs an average of nearly $700 a week as landlords hike rents and the number of available properties shrinks.

SQM Research says the April data shows that Canberra is still the most expensive city in Australia to rent a house or unit.

While the vacancy rate did not worsen in April, remaining steady at a very tight 0.7 per cent, the number of properties available slumped under 500 – from 508 to just 486.

Rents for units barely moved at 0.2 per cent, but the amount being asked for in-demand houses surged 4.5 per cent in the month to 4 May.

This is more than in Sydney or Melbourne, where vacancy rates have gone up due to an oversupply of apartments related to the loss of international student tenants, something that seemingly has not affected Canberra.

Over the past 12 months, house rents in Canberra have risen 9.2 per cent, and units 5.8 per cent.

The cheapest properties can be found in Tuggeranong, where a three-bedroom house will cost $563 a week and a two-bedroom unit $456. The dearest are in the Inner North, where the same properties are getting $800 and $641 a week, although there are more to choose from.

All year, agents have been reporting large groups at rental inspections and some house hunters offering more than the asking rent.

“We are still seeing the supply/demand issue here in Canberra. There are still people relocating to Canberra for work, especially across government departments,” she said.

“Open home numbers have normalised; however, they are still steady and properties are still in demand. We are seeing approximately one to seven groups across the board at each open home.

“People are still offering to pay more, not as large amounts, but we are still seeing it happen to set their applications apart.”

The rent surge has come amid a runaway housing market where standalone homes are taking no time to sell at record prices.

For those not on Canberra’s higher than average incomes, renting, especially houses, is driving them into severe housing stress or into homelessness and on to the public housing waiting list.

Anglicare’s annual Rental Affordability Snapshot late last month revealed a distressing lack of affordable housing options for families in Canberra, with virtually no houses available for anyone receiving Jobseeker, Youth Allowance or Single Parenting payments. Less than 4 per cent of houses were affordable across all other categories surveyed.

Better Renting executive director Joel Dignam said many renters were taking whatever they could, including properties that were inappropriate for families or that would impose high energy bills on already stretched budgets.

He said that while the situation was grim, recent measures in the ACT offered some hope, including legal protections for renters and moves towards minimum energy and accessibility standards.

SQM Research says the squeeze is on in the smaller capitals and regional areas, particularly the Gold Coast and the NSW North Coast, where stock has plummeted and landlords are demanding huge rent increases.

“Demand for rental accommodations is still outstripping supply, which is having the effect of boosting rents in many locations and [making properties] unaffordable to lower-income tenants,” he said.

“I believe we are also seeing the number of occupiers per dwelling falling, which is putting pressure on vacancies. People are also looking for larger properties as they work from home and not wishing to live together.”

Canberra’s vacancy rate is the second-lowest in the nation, only above Hobart and Darwin, which are both at 0.5 per cent.

People are saying in other posts that dual occs fix this. No they don’t. A house near us was rented for $500 per week. When knocked down the dual occs rent now for $900 per week each

Averages are a pretty bad measure to use here though. Median whole be more useful in getting an idea what most will have to pay.

Still, it’s sad they’ve gone up by that much and that availability is so low. Last I had to look for a rental the competition was fierce too and it was very stressful.

Gemma Caitlin love that for us

Just as well have a Green ALP government is it not – standing up for and assisting those of us who have few privileges.

Peter Curtis what can they do ?? They luv the. Land tax coming and there are new suburbs being built …

Nick Savino tried to get into a new suburb? 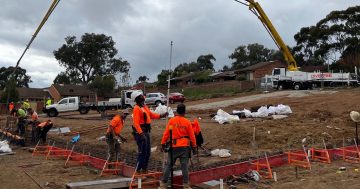