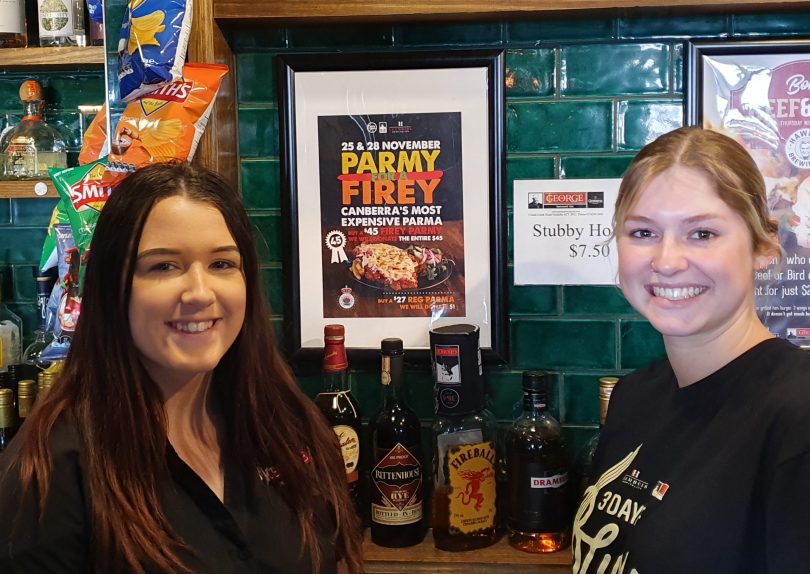 If you want to hook a new sale, a discount is the place to start. This week, the George Harcourt Inn is taking the opposite approach – but it’s all for a great cause.

Tonight (Monday, 25 November) and Thursday, the George Harcourt Inn at Gold Creek, along with its sister establishment, Casey Jones at Casey, is proudly boasting Canberra’s Most Expensive Parmy.

And they’ll be struggling to keep up with demand.

It’ll set you back $45 – which isn’t cheap – but if it’s not the best tasting parmy (and if their Tasmanian salmon is anything to go by, it just might be!), it’ll certainly sit well, because every dollar from every $45 parmy will be donated to the NSW Rural Fire Service.

The manager of the George, Amy Smith, says they’re just trying to help as much as they can.

“We see how tough it is for a lot of families and we’ve actually got a lot of staff that have family in these areas, including grandparents. The George would love to do anything we can just to give back,” Amy says.

This isn’t the first time the George and Casey Jones have offered up their not-so-humble parmy to support those working hard in our community.

“We ran Parma for a Farmer last year and raised over $10,000 between the two pubs over two days. This year for the fireys, we’re asking Canberrans to show their support by coming along for Parmy for a Firey – every cent of which goes to the fireys!”

While last year’s event hit the $10,000 mark, Amy has high hopes that this year they’ll do even better.

“I reckon we’ll sell over 200 parmys. We’re running the event all day from when we open at 11 am until 9 pm so we’re hoping to be pretty busy.”

If parmy isn’t your thing, you can order from their amazing pub menu and there will be other ways to donate on the night.

“We’ll also have money tins and will take cash donations as well to try to get more money. It’s pretty devastating out there and there are lots of people who want to help. Well, this a great opportunity to show that support and make a difference.”

And you can brag that you just had Canberra’s most expensive parmy, and you’ve never felt better.

Parmy for a Firey is on at The George Harcourt Inn, 3 Gold Creek Road, Nicholls, and the Casey Jones Pub, 15 Kingsland Parade, Casey, on Monday, 25 November and Thursday, 28 November from 11 am to 9 pm. 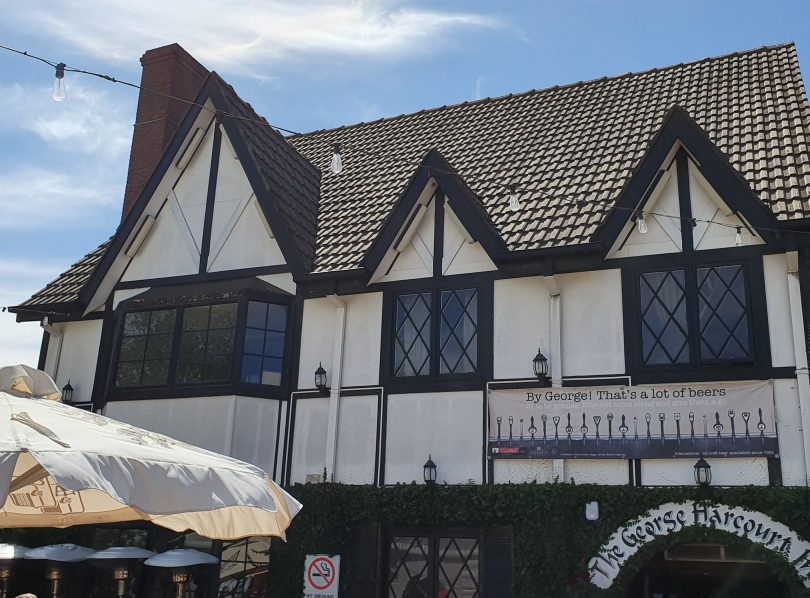 George Harcourt Inn at Gold Creek for short time only is home of Canberra’s most expensive parmy (for a very good cause).

Paul Regan - 39 minutes ago
And the total panorama is spoilt by a couple if trees that have been allowed to grow too tall. That said it is the same fir a... View
Natalia Fayyaz - 12 hours ago
Aeman Ahmad ya no 😂 View
Aeman Ahmad - 14 hours ago
Natalia Fayyaz View
News 5

@the_riotact @The_RiotACT
Post lockdown, Bec's family was one of the first in Canberra to be exposed to #COVID-19. They won’t be the last. But the story could have ended very differently without full vaccination https://t.co/pLQHkDNANt (34 minutes ago)