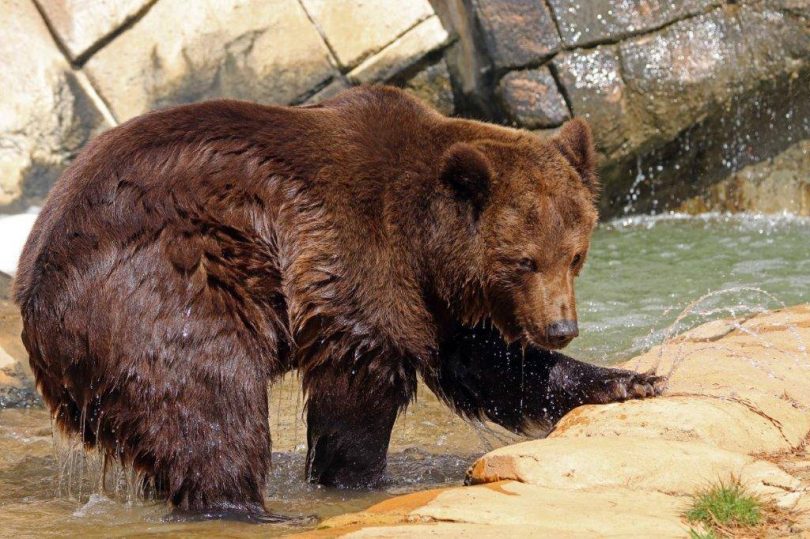 Darkle was one of the zoo’s longest residents. Photo: Supplied by National Zoo & Aquarium.

Canberra’s National Zoo & Aquarium is in mourning after one of its oldest residents, Darkle the brown bear, passed away.

In a statement released on Thursday afternoon (13 September), the zoo said Darkle’s health had been deteriorating for the past few weeks and decided to put the elderly bear to rest.

“The welfare of our animals is always the priority and the difficult decision was made to ease her of any pain or discomfort,” the statement said.

Darkle was one of the zoo’s longest residents and represents the last of the original animals that helped establish the zoo nearly two decades ago.

The owner of the zoo, Richard Tindale, stumbled across Darkle and two other bears, Blondie and Big Fella, at a facility housing retired circus animals in 2000.

The enclosure was not tall enough for the bears to stand up straight so Mr Tindale took them in immediately. He spent the first night close by the bears after their road trip, making sure that they were okay.

The statement said keepers, volunteers and staff gave the bears the love and attention that they craved and they settled in well.

The bears became the zoo’s first residents and were followed by lions Kimba and Delilah, tigons Asta and Tangiere, tiger Torda and leopards Smokey and Zulu. They were all rescue animals from three different circuses, all who had spent most of their lives in trailers or circus rings.

“As sad as we felt (and now feel) when we lost each of those animals, we remember where they came from and the life they lived here,” the statement said.

“Without exception, every one of them enjoyed a very long and healthy retirement here. Darkle, Blondie and Big Fella were adored by our staff and visitors and we treasure the memories of the time they had with us.”

Announcing the loss on social media, the zoo thanked the staff who cared for and loved Darkle and asked the community to share memories and any photos they had of the beloved bear.

Darkle’s passing marks the second death of a popular zoo resident in the region, after Mogo Zoo reported that their beloved silverback gorilla, Kibabu, passed away suddenly in August.

Glad Darkie had a good life thanks to the NationalZoo & Aquarium. 👏👏

Mark Johnson - 2 hours ago
If it’s not licenced what’s it doing on a roadway anyway … View
Julie Macklin - 6 hours ago
Alicia Conley The ACT has no cycle paths. They are shared paths. Yes, those around the lake were built with people on bikes i... View
chewy14 - 7 hours ago
"That they are public doesn’t mean there are no rules for using them." Exactly my point. That the rules should preclude cyc... View
Community 16

Mazzie Woodward - 7 hours ago
We don’t have a working hospital and they are building a giant battery 🔋 does anyone else find this utterly ridiculous? View
HiddenDragon - 11 hours ago
"....will ensure that the nation’s capital remains at the forefront of a booming industry – supporting new jobs in emergi... View
News 21

Juanita Tee - 7 hours ago
David Keir what are you specifically doing for them 🙃... View
Liv Miller - 9 hours ago
Rachel Edmondstone love 💓 this View
David Keir - 12 hours ago
Virginia Loizou sounds like you’re the one whinging champ View
Property 28

whatwik - 12 hours ago
Hope they were able to find their own towel (not to mention undies) more easily than this lot - https://www.abc.net.au/news/2... View
Breaking 3