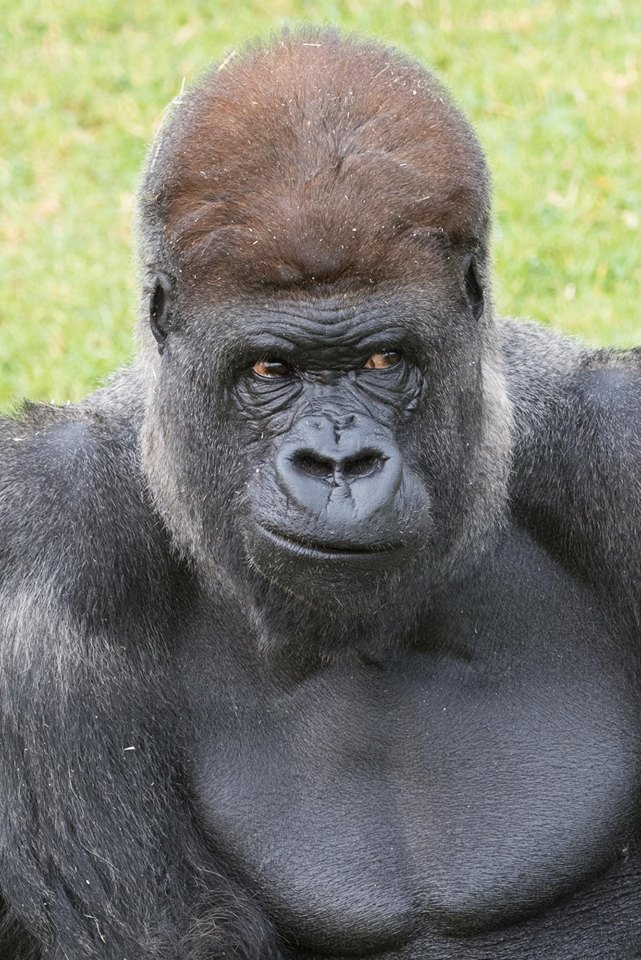 Mogo Zoo is in mourning after its beautiful silverback gorilla Kibabu died suddenly on Saturday (25 August).

Tributes are flowing in from interstate and around the world for the 41-year-old primate, described as “a very wise soul” by the zoo’s owner Sally Padey.

Kibabu’s death was unexpected, with Ms Padey telling The RiotACT that he hadn’t been sick and didn’t suffer at all. An autopsy is being completed but at this stage, they are suspecting the cause was a heart attack.

“He was quite a famous gorilla around the world,” said Ms Padey, who has been inundated with emails and messages of condolence.

Posting on Mogo Zoo’s Facebook site, Ms Padey shared the news of Kibabu’s death, writing that the message was “one of the hardest I have had to write for Mogo Zoo”.

“Five years ago Kibabu our beautiful silverback gorilla and his family came to live at Mogo Zoo,” Ms Padey wrote.

“It was such an honour to share these five years with Kibabu – with his integrity as a leader and father – and just to be in his presence was always a very powerful experience, not only for me but for all who knew him.

Kibabu leaves behind at Mogo Zoo his mate, Kriba, and their daughter, Kipenzi, who have been taken off public display in order to give them time to grieve.

Kibabu was a Western Lowland Gorilla and he and his family moved from Taronga Zoo to Mogo Zoo in 2013. They originated from Apenheul Primate Park in the Netherlands and arrived at Taronga in 1996 as part of an international breeding program.

A Mogo Zoo Facebook post from August 2013, captures Ms Padey’s excitement at the impending arrival of Kibabu and his family at the time.

“Sally first encountered Kibabu at Taronga Zoo 16 years ago. Sally stood at the glass in awe of Kibabu as he was beating his chest during a demonstration of dominance,” the post states.

“Since then, it has been Sally’s long-term dream to house and care for gorillas at Mogo Zoo. Sally’s dream is about to come true and we’ve never seen her so proud and excited – she simply can’t wait.”

The extent of Kibabu’s popularity can be seen in the huge response to the Facebook post about his death, with 1,900 people responding to the post so far, and 386 comments and 331 people sharing the post.

Among those to comment were a number of former keepers and members of the public.

“I am in tears to hear this sad news. I had the privilege of working with him at Taronga and he started my career as a gorilla keeper,” wrote Lisa Ridley.

“He truly was a magnificent gentle giant, a wonderful father and an amazing leader to his family. RIP Kibabu you will forever be in my heart…sending much love to all at Mogo.”

“He was one of a kind and I felt so lucky to have worked with him. Thanks Sal. Thoughts are with Kriba, Kipenzi, Sal, Lou, Lisa and the gorilla team at Mogo and all who worked with him, admired him and loved him from around the globe,” wrote Sophie Miller.

“Thoughts with everyone at Mogo, and especially Lou [Grossfeldt], who knew him best and was there to share his last moments. Fly high big fellow. Your presence won’t be forgotten. Your legacy lives on,” wrote Dave Blissett.

“RIP, and thoughts with the zoo owners and all the keepers. And feeling very blessed to have only been there a couple of months ago and my little boy was able to have an up-close experience and interaction with Kibabu as he sunned his back whilst looking out the glass – a perfect opportunity for my two-year-old to have a chat and a “touch”,” wrote Lisa Jenkins.

Perhaps a fitting way to finish is with this comment from one of Kibabu’s adoring public, Shirley Kirkwood, who adds a touch of humour to her condolence that the big gorilla may well have appreciated.

“Oh my, how sad. He was just the most wonderful fella. I adored standing watching him for ages at Taronga and down at Mogo. I recall someone talking about all his extraordinary attributes in a presentation and I couldn’t help but put up my hand and ask….”Is he on RSVP”? For those who worked directly with him, my condolences, but he has left an extraordinary legacy in all his offspring,” she wrote.

Marea Fatseas - 2 hours ago
Essentially, 80 percent will still go to landfill under this proposal, which is not a great outcome. View
Capital Retro - 11 hours ago
Are you suggesting that while there would be difficulty getting permission in locating and establishing another landfill in C... View
simm - 14 hours ago
It is really just a Waste Tipping Hub (TIP) proposed in the wrong location ... that being a populated built up area on a cong... View
Opinion 2

MERC600 - 3 hours ago
Tim I fear your saying 'The most obvious is the economic downturn created by COVID-19' will prevail. Also this Covid bug econ... View
News 64

David Brown - 3 hours ago
Will he still be a candidate? Just not an endorsed Lib? View
Guy Manton - 5 hours ago
Andrew Duncan there was a debate, theres been thousands of ongoing debates about these kinds of issues. Canberra doesn't supp... View
Andrew Brien - 22 hours ago
Canberra Liberals at their best. Apparently one was claiming get on Sportsbet they have great odds of the Liberal Party to Wi... View
News 25

David Brown - 3 hours ago
Baaa wants to sell off our foreshores to his developer mates. 😟 View
Julie Macklin - 8 hours ago
George Watling I live in the south, but the light rail is a useful way to get to Gungahlin after catching a bus to Civic. I h... View
Julie Macklin - 8 hours ago
Amanda Evans That's why I wrote, "with hopefully enough handicapped parking for those who really need it." I sometimes have a... View
Breaking 2

Acton - 4 hours ago
Who would have ever believed that Australians could treat each other in such a way. What happened to mateship in adversity? T... View
News 25

Capital Retro - 10 hours ago
CSC, this is a brilliant initative. View
chewy14 - 11 hours ago
Capital Retro, Your link doesn't say what you think it does. Firstly, your link is about an audit and it specifically says th... View
Capital Retro - 23 hours ago
Data on page 68 of this audit would appear to be at odds with what your colleague concluded: https://www.veolia.com/anz/sites... View
News 14

Capital Retro - 11 hours ago
When was the last infection of COVID 19 logged in Canberra? Compared to the rest of the world the pandemic is over in Canberr... View
HiddenDragon - 24 hours ago
Even if these figures are a little rubbery right now, with the federal budget being delivered 11 days before ACT election day... View
bigred - 1 day ago
Alistair lost the election the day he declared the pandemic over. Anyone flirting with the notion of him as the head honcho w... View
News 2

@The_RiotACT @The_RiotACT
A former chief of the Defence Force has called for the half a billion dollars earmarked for the @AWMemorial expansion to be spent on a research institute for post-traumatic stress. Former AWM director Brendan Nelson has hit back at critics of the proposal https://t.co/4jMIfr02p9 (57 minutes ago)